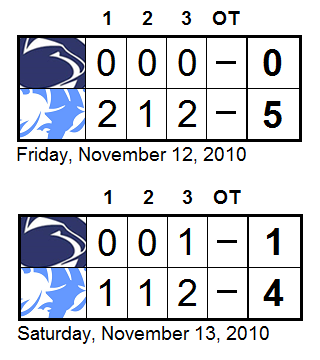 First off, tip of the hat and a hearty thank you to Steve and Barb Penstone for the work they do on the UStream broadcasts, something that I hope nobody who follows the team from afar takes for granted.

A little bit of a confession: I knew that Rhode Island broadcasts their home games on FastHockey.com. Partially from curiosity, partially from wanting a opposing perspective on things, I watched that broadcast when I sat down to review the games. That lasted exactly 11:18 of game time, until I tried to analyze the first Rhode Island goal, and what I wanted to see was out of frame. I viewed that as pretty much the last straw for the bouncing, blurry video narrated by a kid who occasionally interjected to say "icing Penn State" and similar. I'm spoiled, I guess. Unfortunately, some technical issues forced me to stick with the URI broadcast through most of Friday's game, but rest assured, I jumped to UStream as soon as I was able.

It looks like "history" is the word of the day, and not in a good context. I'm struggling to find a worse weekend for the Icers - one goal scored, two losses by a total of eight goals (okay, two empty net goals on Saturday, but they still count). Sweeps happen occasionally, sure, some games tighter than others, but my best guess for the last time anything quite this bad has happened? October 1996, 15-0 and 3-1 losses to Alabama-Huntsville, then the defending NCAA Division II national champions. I believe that to be the last time we've been held to one goal for the weekend or lost by eight goals combined. Your guess is as good as mine as far as whether an ACHA team has ever done that to us.

The other little bit of history: the Icers, at 2-2-0 since dropping to No. 8, are poised to possibly leave the top 10 altogether when the next ACHA rankings come out Friday. I sincerely wonder if that's ever happened since the formation of the ACHA in 1991.

Maybe the most frustrating thing about it was the fact that the Icers weren't playing their worst since 1996. PSU was dominant for stretches on Friday, especially early on.

However, the tone of Friday's game, to me, was set by the first two power plays, one each way. Penn State's came first and led to about three tremendous scoring chances on the first wave, but Rams goalie Paul Kenny was up to each, and after changing the power play unit midway through the advantage, the Icers were unable to get established in the URI zone.

About five minutes after that penalty ended, Kevin Miller tripped Kyle Krannich, who had position while driving the slot (in other words, not the worst penalty to take), and Penn State went to the kill.  Shortly after, Dan Petrick and Carey Bell lost a 2-on-1 battle in the corner and the Rams' Dan Lassik made it 1-0. And shortly after that, 30 seconds to be exact, David Macalino finished a beautiful pass from Sean O'Neal to make it 2-0, a play that started with a great one-on-one E.J. Astarita denial of Chris Cerutti on the other end. It's foolish to declare a game, let alone a weekend, over at 2-0, but I dare anyone to tell me that sequence wasn't a microcosm of the whole two games.

Special teams reared its ugly head again when the Icers turned in a putrid two minutes on the advantage bridging the first and second periods with a chance to get back in the game. As an aside, I always hate having power plays broken up by intermission, because to me, any advantage gained from clean ice is negated by a break in momentum, the chance for the PK to catch their wind, and even the faceoff outside of the zone. On the other side, the Rams continued to punish Penn State for taking penalties, with a second powerplay goal and a converted penalty shot polishing off the win in the third period.

On Friday morning, I compared Penn State's goaltending situation to Rhode Island's. On Friday night, I learned that I was dead wrong - there really is no situation at URI, just a pair of great goalies splitting the minutes. The Icers' situation, on the other hand, went from muddled to murky - assuming murky is worse than muddled - when Teddy Hume gave up five goals on 24 shots Friday night and Matt Madrazo turned in what's quickly turning into a trademark solid performance Saturday. In fact, "solid" doesn't really do it justice, Madrazo was tremendous and kept PSU in a game we probably deserved to be in less than the game on Friday. I love the kid's moxie, he has a little of that Patrick Roy swagger in him, and his puckhandling abilities are capable of jump-starting the offense, something one can appreciate in the middle of a one-goal weekend.

I hate doing the thing where you examine each goal to assign blame - goalie, defenseman, backchecker - something that's usually done to irrationally exonerate a goalie, so I'm not going to do that with Hume. I'll just restate my belief that Hume can get his game together and be the guy come March. In a sense, I think he needs to be that guy. But at the same time, it's becoming more and more evident that he's not going to have eternity to piece things together, not with how Madrazo (along with Ivanir and Jay when they're in) has been playing.

Along with the goalie switch, Saturday brought new linemates for Dominic Morrone, yet again. Even though it's not an obvious culprit, I can't help but think that our inability to piece together a consistent second line behind Paul Daley-Tim O'Brien-Cerutti has been part of our struggles. In my opinion, Morrone is the clear anchor to that line, he just needs to develop chemistry with someone. There are certainly candidates - Marek Polidor was the Icers' offense on the weekend, on a goal that showed off his wheels as he blew by the Rams' defense. George Saad whenever he comes back. Nick Seravalli has looked better each game back. Michael Longo adds a two-way presence.

I might as well close with a positive (sort of): the URI white out boarding the failboat. Guess that FastHockey feed was good for something after all.
﻿﻿
﻿﻿
Posted by Kyle Rossi at 12:55 AM