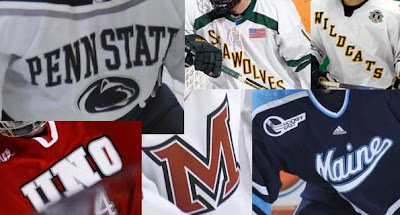 Second of two parts taking a look at Penn State's prospects for success in NCAA hockey. Part I here.

I believe that history, used in the right context, can give us a glimpse into the future, and in Part I, we saw that start-up programs can be a mixed bag. Although almost all new programs enjoy some kind of notable success within the first 10-15 years, it's not lasting success in some cases. At the same time, two of the five we looked at won national championships within 16 years, and a third, although it took longer, is now a perennial contender. Here's what I have yet to see: a well-thought-out reason why a well-funded, well-supported, well-coached Penn State won't be towards the top of that scale. Because Pennsylvania isn't a hockey state?

Well, if you're one of the "only Minnesota, Massachusetts and Michigan are allowed to be hockey states" crowd, then no, obviously Pennsylvania isn't a hockey state. And while it's true that Pennsylvania trails seven other states in the production of major-conference NCAA hockey players, that's not the whole story to me. Here are the top 15, in terms of the raw numbers (Source: Me, I tallied from every team's roster, hence no link, and hence this apology if you double-check me and I missed by one or two somewhere.):
Amazing how Wisconsin, Denver, Miami and New Hampshire manage to put together generally well-regarded teams when their home states produce fairly comparably to Pennsylvania, or worse. Wisconsin's next to Minnesota and UNH is at least in New England, I suppose, but PA also borders #4 New York which offers only schools from ECAC Hockey, the weakest of the major conferences, as competition. Ohio and New Jersey aren't complete write-offs either.

Also, Pennsylvania doesn't have five or seven major-conference programs in the state, PSU will be the first. Do some quick division, and you'll find that of the states with programs on the list above, only Minnesota (barely) and Wisconsin produce more major college players per major college program. Is PA the best market out there? No, but it is a drastically underserved one. Supply and demand. ECON 002.

While in-state recruiting is generally less important in hockey than, say, football (you still have to hit Canada and the Big Three states hard, and even Europe now as well), Penn State will hardly be hurting at home base. And with two of the most popular US-based NHL franchises around, it'll only get better. After all, the pros are generally what draw people to the game in the first place.

So what will Penn State be offering these recruits? A highly-respected education? The best facilities in the country? Phenomenal television coverage by college hockey standards? Sure, but perhaps most importantly, Penn State will be offering the chance to be in on the ground floor of something special. Do you want to be just another of Jack Parker or Jerry York's Hobey finalists, or do you want to be remembered well beyond that for being an original building block of a great program? The right type of personality, the guys we want, will love that recruiting pitch, and it has credibility because it's not coming from a perennial doormat, it's coming from a high-profile start-up with tons of positive momentum.

Like I said in Part I, the coach who delivers that pitch is of the utmost importance to me. The right guy can get you pretty close to where you want to go pretty quickly. The wrong guy can set you back a decade, maybe even more once that recruiting pitch in the last paragraph is coming from a losing program. To that end, I'm hoping to see a guy with a proven track record of success, but who's still hungry for more and believes wholeheartedly in what we're trying to do. Our Shawn Walsh, if you will. Yeah, okay, big stretch there, I know, who doesn't want that coach? But that guy's out there, and he's going to help drive this bus forward. We just have to find him, which admittedly is the hard part.

So again, why not us? Anonymous universities living in the shadows of others went from zero to national champions in 15 years. Branch campuses in non-traditional hockey areas are capable of going 4-2-0 against big, bad Minnesota, Michigan and North Dakota in their 14th year. Yet Penn State supposedly can't because...feel free to fill in that blank yourself, because I'm at a loss. Just please offer something better-researched than "we're new and not in a hockey state."

I guess this is a good time to mention that next week, I'm beginning a series of posts looking at potential bus drivers. I don't have any inside information (please re-read my masthead if you thought otherwise), just a bunch of names that have been kicked around rumor mills or that just seem like good fits to me. I'll start with our own Scott Balboni, go through popular rumor subject Mark Johnson, and include a few others that are completely out of nowhere.
Posted by Kyle Rossi at 11:09 AM

Email ThisBlogThis!Share to TwitterShare to FacebookShare to Pinterest
Labels: two-parter