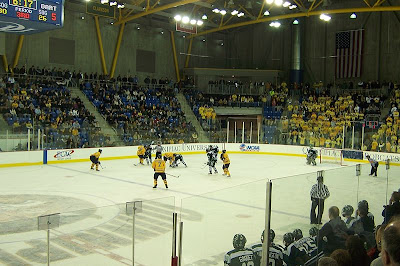 Fifth and final post in a series taking a look at rinks visited by Joe Battista, Terry Pegula and Tim Curley during their whirlwind tour over the summer and fall of 2010. The others: Boston University's Agganis Arena, Miami University's Steve Cady Arena, Notre Dame's Lefty Smith Rink and Minnesota-Duluth's AMSOIL Arena.

Before we go any further, I want to sneak in an exterior shot of the home of the Quinnipiac Bobcats, even though it has absolutely nothing to do with Penn State. 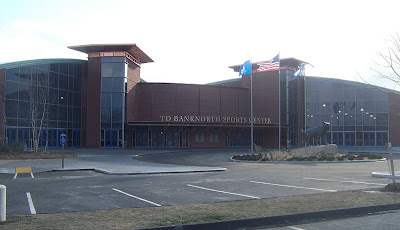 Basketball on the left, hockey on the right, fans of the two sports forced to co-exist in the middle. Sorry, I just thought that was cool. I'm sure many heated exchanges about the relative merits of "bouncyball" (as many hockey fans derisively call it - last post) have taken place in that lobby. Or maybe both sides just let the other be when both teams are playing at the same time in there, which probably doesn't happen that often anyway. Yeah, that one's more likely.

First thing to point out: go back to the interior shot at the top. You'll notice that you may need spiked shoes and a rope to get from the bottom to the top of the seating. That steep slope in the seating bowl is something that appealed to Battista:


We want a steep rise and run so that it’s a great venue for spectators. We saw that at Boston U. and Minnesota and Quinnipiac. All of those places remind you of Hersheypark Arena. Not a bad seat in the house because it’s built for hockey.

If the infamous sketch is any indication, the Pegula Center will share this feature.


Beyond the seating bowl (which is set up in the way I prefer as well, although AMSOIL started to get me to come around on that, as I said yesterday), it's tough to see what Battista got out of the visit, because TD Bank Sports Center doesn't really offer many of the things Penn State would seek to include in the Pegula Center. It's a nice facility, but it looks to be pretty spartan. A great place to watch a game, no doubt, but not towards the top of the facility rankings. But hey, don't take my word for it, go back to Quinnipiac's page about the place:

I'm certainly guilty of overanalysis from time to time, but that doesn't sound to me like much beyond the essentials. If you had a hydrotherapy room like Minnesota-Duluth or a puck-shooting range like Notre Dame, you'd probably toss it in that sentence.

But you know what? If the seating bowl slope was indeed our main takeaway from Quinnipiac, it was worth the trip in my opinion.
Posted by Kyle Rossi at 10:12 AM