Board of Trustees Names Architect

Penn State Live, the university's official news source, has reported that the Board of Trustees gave Crawford Architects, with Bohlin Cywinski Jackson, the job of designing the Pegula Center.

Bohlin Cywinski Jackson worked on the just-under-construction Biobehavioral Health Building at Penn State, and they have a litany of projects on other campuses under their belt - they clearly know the ins and outs of the university environment (red tape included, I'm sure). Their style seems to me to be modern but not overbearingly so, although they clearly know visual impact as well. And while their portfolio is light on sports-related projects, well, that's where Crawford comes in.

Crawford...you remember them, right? They were the ones behind this press release, which leaked in early 2009, then was quickly removed from their site, leading to the strongest "Penn State hockey to NCAA" rumors ever (well, until the "real" ones).

The program includes new a 6,000-seat venue for Varsity Hockey and other events, as well as an additional sheet of ice. Full services amenities will be included, such as premium seating options and provisions for a wide range of events.

According David Murphy, Principal at Crawford Architects, “The challenge is to design a facility that enhances the surrounding campus, functions smoothly, and meets all the needs of a Division I program.”

Where Bohlin Cywinski Jackson gently treads into modern territory, Crawford marches in with a bazooka, as evidenced by Vector Arena in Auckland, New Zealand or a proposal for Samsan Arena in South Korea. I'm guessing that their mission statement reads as follows: "Be sleek." Just a guess on my part, but those looking for a classic hockey barn might be disappointed.

It doesn't appear that they have any college hockey venues to their credit, although they worked on a proposal to upgrade Notre Dame's Joyce Center Rink (the university ultimately went in a different direction).

While those arenas look great, I'm more interested in a different project. Check out this picture of the outside of the Branson Convention and Exhibition Center (more available at the link): 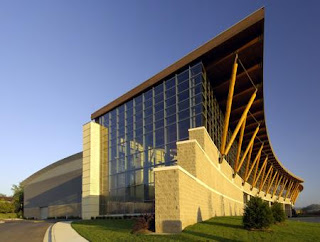 I don't know about you, but do you know what that looks like to me? 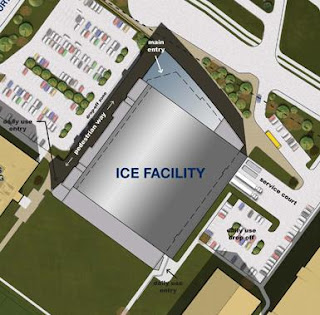 Overthinking it? Maybe, but then again, maybe not. Maybe the answer's staring us right in the face. Can't wait to find out.

UPDATE: The Collegian wrote up a blurb on the architect selection (with more coming Monday), and gave the hardest number we've seen as far as seating capacity: 5,600.
Posted by Kyle Rossi at 4:23 PM