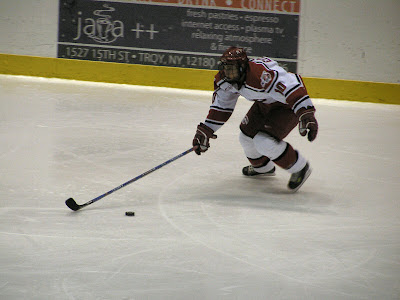 A couple weeks ago, I checked in on the brother of a current Icer, George Saad. On Wednesday evening, I happened upon another news item related to the sibling of an Icer, this time former center Alon Eizenman (1997-2001). Alon still sits third on the Icers' all-time assists chart with 165 and for my money, the 2000 Bob Johnson Award winner and ACHA Player of the Year was the best player I've seen wear the blue and white, although I believe it's human nature to be partial to your first group of players, so I'm going to have to disclose some bias in that department. Also, I have a smart guy bias, and Alon certainly is one of those.

Alon's brother Oren is also a tremendous player and a smart guy. After coming through the same Wexford Raiders organization as Alon (except at the Junior A level, as opposed to Alon's Midget AAA/cup of coffee with the Junior A team), he completed a stellar four-year career at Rensselaer Polytechnic Institute (RPI) from 2003 through 2007. Among other highlights, he led the Engineers in goals his junior year with 16 and made the ECAC All-Academic Team twice, no mean feat in a conference that includes the hockey-playing Ivy League schools.

Significantly, Oren also competed in international tournaments for Israel while at RPI. Without a doubt, one of his career highlights was winning the gold medal at the 2005 IIHF Division II Group B world championships - along with linemates Alon and Erez, a third brother.

I chose a picture of Oren in his RPI jersey for the top of this post because, well...I think I need HockeyDB.com to tell the story since 2007.

Got all that? Good. Because you'll now need to add the piece of news that inspired this post on top of it: the Crunch traded him to the soon-to-be Connecticut Whale for future considerations on Wednesday. Hopefully, it's a move that will allow him a consistent look at the AHL level, because that's something that he has yet to receive, as you can see. For his part though, Eizenman said last season that he's willing to work hard and continue to grow regardless of whether he's at the AAA or AA level of minor league hockey.

Incidentally, the article with that quote is a great read (I just wish I could have figured out a way to shoehorn more of it into this post), and if you still need more, here's another good one. Both make it clear that Oren is one of those guys who will be successful inside or outside of a hockey rink. Much like his brother.
Best of luck to Oren Eizenman as he continues to pursue his hockey dreams.
Posted by Kyle Rossi at 9:42 AM