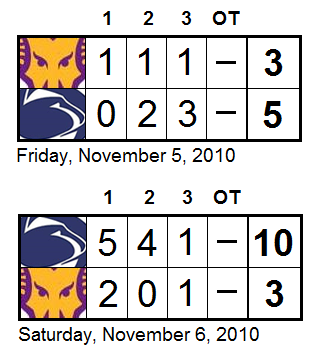 There's an essential question that I think needs to be asked at this juncture. I think a lot of us, myself included, have been kind of biding their time with this team through the struggles, waiting for the "real" Icers to show up and lay waste to the ACHA. Is it time to accept that maybe that isn't going to happen? That maybe what we're seeing now is what we have? I don't know the answer, although I smell a full-on post about it coming at some point when I have nothing better to talk about.

Watching Friday's game broadcast on UStream, Steve Penstone liked to talk about passes missing and/or not being controlled by the recipient. While that's true, I think it's more than simply a matter of needing Gordon Bombay's egg drill (3:20 in, and yes, I watched entirely too much of that movie in the process of finding that) - I think it's a matter of the team pressing. That occurred to me sometime during the first period when Paul Daley was floating a backhand pass across the width of the neutral zone and continued through a series of bad-angle shots from several players.

In a first-intermission interview, Joe Battista said that he thought he saw a turnaround coming.


I saw some good physical play toward the end of the period, and that says to me "alright, they're going to get revved up a little bit," and I'm sure Coach Balboni's giving it to them pretty good between periods.

Then, something - whatever it was - seemed to click for the last 40 minutes Friday and throughout Saturday's game. Penn State was dominant, playing with controlled confidence, and operating in what I like to call meat grinder mode for long stretches - cycle the puck, generate a shot, win a battle down low to keep possession (or lose the battle but cause a quick turnover on the forecheck), rinse and repeat. It's things like that, and things like the way the team responded to the two West Chester goals late in the first on Saturday that make me want to say "no, this team has more in the tank." For now, optimism's the word, and I'm not letting the scores of the West Chester-Delaware games poison that.

Dominic Morrone has been arguably the Icers' best player this season when healthy, and I don't want his efforts on what turned out to be the game-winning goal Friday to be overshadowed by Chris Cerutti's finishing off a hat trick. While on the power play, Morrone drove the net hard, working around one defender and through another, creating chances first for Daley, then for Cerutti, who pounded it home. Playmaker Morrone and natural goal scorer Cerutti complement each other well, and good things happen when they're on the ice together. It was disappointing to see them split back up on Saturday, but I also understand why Kurt Collins needed to come off of the Daley-Tim O'Brien line. Speaking of O'Brien, how great has he been quarterbacking the power play?

On the blueline, I like Kevin Miller and think he's been the steadiest of a pretty shaky group - Rich O'Brien offers offense and physicality to burn, but I trust Miller with the puck in his own end much more. That said, he has to stay on the ice. He accounted for half of the Icers' four penalties Friday night, and I considered both bad penalties to take - on the third period interference, it looked to me like he was just trying to lay someone out without regard to positional play or, you know, whether the guy had the puck. Miller came back Saturday with his first Icers goal, on a great feed from Mike Broccolo. Incidentally, I thought Broccolo and his fourth linemates, Mike McDonagh and Joe Zitarelli, had a great game Saturday.

That defense was victimized again Friday - the pairing of Carey Bell and Ryan Erbe was beaten for two of West Chester's three goals. The first goal of the game came immediately after an Erbe turnover. When the Rams took a 3-2 lead early in the third, Bell was beaten to the outside by Brian Ruskowski, who then found Tim Margadonna (Erbe's man) with space to get off a shot and beat Dan Ivanir.

I guess I have to address goaltending, since it's an issue now. With Teddy Hume away on a job interview, Ivanir got the start Friday, and Matt Madrazo was between the pipes Saturday. By the way, that job interview thing? Well, that smokescreen was nice for two days. Not that Hume didn't have an interview, but Balboni probably wasn't upset by its timing:


"We're at a point right now where our starting goalie is not playing too well. I'm trying to give other guys opportunities."

Oh, ok then. Could've just said that in the first place.

I'm really not sure what to make of either goalie's performance, although in my opinion, Madrazo was the better of the two. While he took himself out of position a couple times, he demonstrated a flair for the great save, stood tall in the face of runs in the second period and even contributed offensively with a first-period assist (and he was very close to a second). That said, I'm still not convinced that either one did enough to steal the bulk of the starts, and I'd personally like to see a couple more Hume-Madrazo split weekends to get a better look at the two in comparable situations.
Posted by Kyle Rossi at 1:42 PM