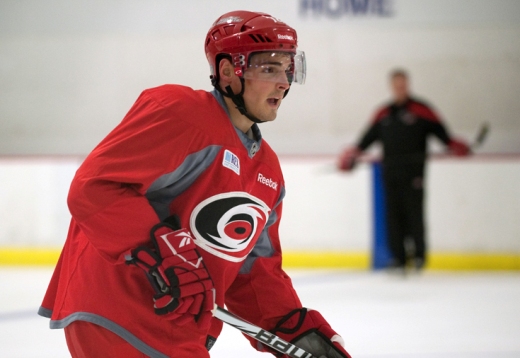 Two weeks ago, Tommy Olczyk became the first Penn Stater to participate in an NHL development camp, and he was joined in that distinction this week by 2013 commit Dave Thompson with the Philadelphia Flyers. In their honor, here are the notable occasions when PSU hockey players have donned jerseys of teams in the world's best hockey league. I ranked them, because ranking things is fun.

Thompson - a Flyers fan and a Glen Mills, PA native - is presently at Philly's prospect camp, which began Monday and runs through Sunday in Voorhees, NJ. He'll rejoin the BCHL's Chilliwack Chiefs this coming season, then begin with the Nittany Lions in the 2013-2014 season that will also feature the debut of both the Pegula Ice Arena and the Big Ten.

It's really nothing on Thompson that he's sixth here, because it's no stretch to say that he'll end up as the best player of the bunch. It's nothing on the Flyers either (put down your knives), because if I was going on how much I like the teams, I'd definitely put Carolina last (I was a Whalers fan as a kid until they moved). Thompson's sixth simply because, unlike the others in this post, he has yet to play a game at PSU. 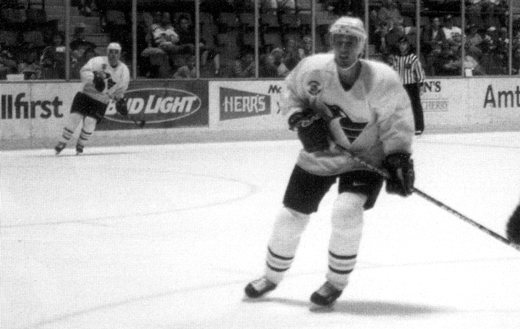 Eizenman's look at Penguins camp was a precursor to a successful pro career, although not in North America. From 2001 through 2007, he played for Tours and Courbevoie in France (where he was a point-per-game player) and Bat Yam and Haifa in Israel. The highlight of his pro career, however, was when he led Israel to the IIHF Division II World Championships gold medal in 2005 while skating on a line with brothers Oren and Erez. Eizenman received his J.D. in 2007 and is now a practicing attorney in his hometown of Toronto. He became one of just nine people ever voted to the ACHA Hall of Fame in April. 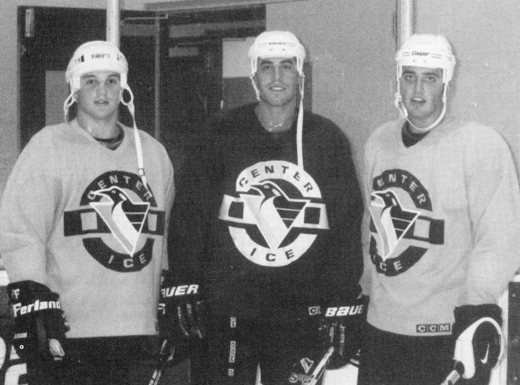 This trio was a vital chunk of the 1997-1998 PSU team that ended a string of near misses with an ACHA national championship and subsequently followed Rob Keegan (below) as invitees to Penguins camp. All three survived for the full two weeks, but afterwards Coyne and Bursich were assigned to Wilkes-Barre/Scranton's AHL camp while Pietrangelo was released in spite of his sharing a last name with Pens legend Frank Pietrangelo. He and Coyne ended up spending a couple seasons each in the AA-level minors.

Interestingly, the trio had a reunion of sorts with the doomed Valley Forge Freedom in the doomed MAHL in 2007-2008. Coyne and Pietrangelo (as well as former Icers Chris Puscian and Tom Westfall) were part of the Freedom's last-ever win, 8-4 over Wooster on February 2nd, 2008. Bursich teamed up with Westfall (the one PSU mainstay on that team) and played in a 14-4 loss to Indiana on December 29, 2007 in which former Icers Justin Depretis and Teague Willits-Kelley opposed him. Depretis had four goals and three assists in that one, by the way.

I guess I need to drop the Coyne-Jaromir Jagr photo in here too. Not the last mention Jagr gets in this post, by the way. 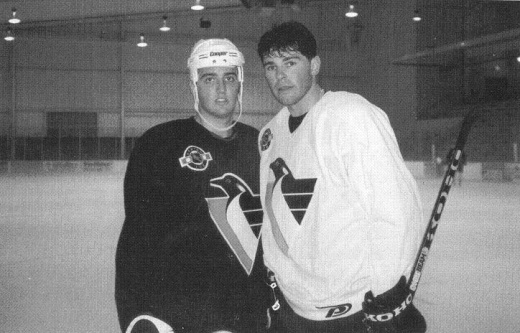 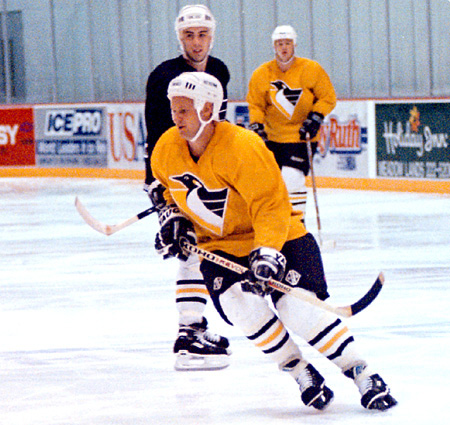 Keegan, who scored 274 points as an Icer, won the Bob Johnson Award (formerly given to the ACHA player who "demonstrates exceptional hockey abilitiy and achievement, leadership, sportsmanship, and enthusiasm for the game") as a senior and became the first Icer ever invited to an NHL training camp. From the Icers' 1996-1997 program:


In his first intrasquad game he was lined up against NHL all-star Jaromir Jagr for most of the game. "You can't get caught watching him," Keegan said. "He's tough to cover and you've just got to do the best you can with him." ... When asked about his experience at training camp, Rob responded, "This is a dream come true for anyone who has ever played the game. Regardless of where I end up playing, it was a great learning experience and I had a lot of fun." 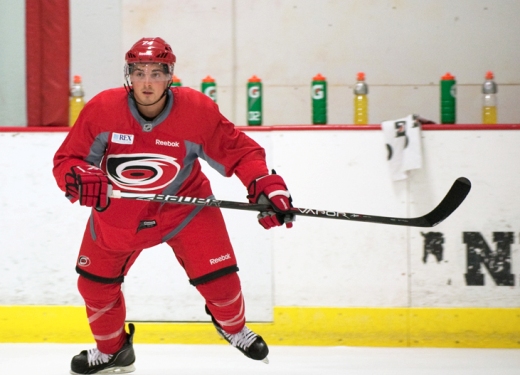 Olczyk, a PSU sophomore who attended Carolina's conditioning camp last week, is set apart by his involvement with a non-Pennsylvania team. The Penguins campers on this list, ostensibly at least (since I don't have any insider knowledge), were helped by Joe Battista's strong connection to the organization. Sure, being an Olczyk probably helps get your foot in the door in most places, but don't tell that to Hurricanes coach Kirk Muller, who was impressed with the demeanor of both Olczyk and brother Eddie, a UMass senior who was also at the camp.


“There’s a maturity level there that they’ve been used to and knowing the pro hockey mentality – they’ve been around it probably since they were kids in the dressing rooms,” [he] said ... "It’s familiar to them – they know how to train, how to be a professional – you watch them on the ice – you can see that from the experience that they’ve had.”

Olczyk (along with Thompson) is also notable for the fact that his story isn't finished yet, a fact not lost on Olczyk.


“I just want to put myself on the radar,” [he] stated. “Just coming in here and making an impression, that’s my biggest goal here."

Until further notice, Scally holds the title based on his playing in actual, for realsies NHL exhibition games. That came about largely because of the bizarre state of Pens goaltending at the time. Long-time netminder Tom Barrasso had begun to falter and was shipped off at the 2000 trade deadline. Jean-Sebastien Aubin, the apparent successor, held out during that training camp (for the now-quaint amount of $700,000, as it turned out). A series of injuries to other contenders left Sebastien Caron as the most accomplished goalie in camp and opened the door for guys like Scally and former RPI star Joel Laing to make an impact.

I ran down Scally's pair of preseason games in more depth almost exactly one year ago, but the short version is that he stopped 16 of 17 in relief against the then-new Columbus Blue Jackets, earning credit for a 3-2 win on September 15th. On September 23rd Scally started, but was beat by Milan Hejduk, Ray Bourque and Adam Deadmarsh on the power play before giving way to Laing halfway through an eventual 5-2 loss to Colorado in Hershey. He was sent down before that game even ended, but followed that setback with a six-season pro career.

Here's the best/only action shot of Scally in net for the Pens. Unfortunately, it's tiny. And it might be of his goal against in the Columbus game. 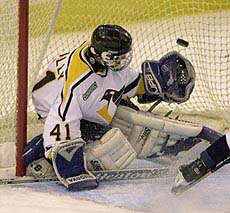