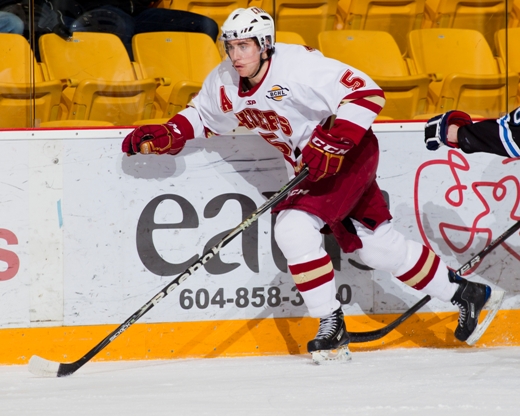 Chilliwack Chiefs (BCHL) defenseman David Thompson, a 2013 Penn State commit, was one of 43 players invited to the Philadelphia Flyers' 2012 Prospect Camp. The camp will run from July 9th through 15th at the Flyers Skate Zone in Voorhees, NJ and is open to the public. Since that's undoubtedly in proximity to at least one Penn State hockey fan, the on-ice times are:

Special events on Wednesday, July 11th will take place in Stone Harbor, NJ - here is a schedule for the day.

Thompson, who will play one more year with the Chiefs before joining the Nittany Lions for 2013-2014, had a solid year for Chilliwack in 2011-2012. He more than doubled his point total from 2010-2011 (14 to 30) and helped his team to a playoff berth, while also maintaining a physical presence on the blue line - which makes sense for a guy who patterns his game after Scott Stevens and Chris Pronger.


"I try to let my play do the talking for me and I try to be smart about what I’m doing, but you’ve got to play mean and tough or people are just going to roll over you," Thompson said last year. "It’s just a matter of doing it intelligently."

The Glen Mills, PA native is a confirmed Flyers fan, so this should certainly qualify as an unreal experience for him. He actually has playing history with teams named the Philadelphia Flyers as well, as he was a member of the Jr. Flyers' U18 2009-2010 Atlanic District championship team that took home the silver medal at nationals. After not making the USHL's Muskegon Lumberjacks in 2010-2011, he relocated to the BCHL and played for the Quesnel Millionaires that season, then followed the organization through their 2011 relocation to Chilliwack.

For more on Thompson, here's the TYT post from his PSU commitment in December.