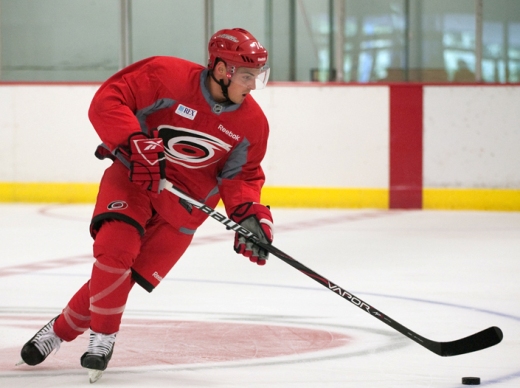 Generally, I'm happy with the inaugural men's schedule, or at least understanding of the realities that led to things like six ACHA games. One place where I'm displeased, though, is that October 13th game with AIC in Wilkes-Barre. That weekend should have been the culmination of a week-long celebration of Penn State NCAA hockey at University Park (not-so-subtle hint to get the Blue-White weekend carnival in for it, or at least sell funnel cakes outside the rink...yum), with the men playing their first-ever games Friday and Saturday, and the women playing their first home games Saturday and Sunday against Syracuse. Instead, they decided to break that up to go market chasing - which is fine in most cases - on a weekend I felt should have been left alone. Not only that, but they moved the first women's home game from Saturday afternoon to Saturday night, making it impossible to watch both even with teleportation powers.

Chartering a bus to get PSU students and local fans two and a half hours up the road would be a step back in the right direction. While not ideal, it's something the university ought to do to give the community back one of a very limited number of DI home games.

2015 forward commit Alec Marsh did quite well for himself at the prestigious USA Hockey Select 17 Player Development Camp in Rochester, NY last week. In six games, he put up a goal and five assists to help his Gold Team to the title via a 3-2-0-1 (W-OTW-OTL-L) overall record, including a 4-2 championship game win over the Columbia Team. Marsh's six points tied for the team lead and for sixth among everyone at the camp.

In yet another little milestone for the program, Tommy Olczyk became Penn State's first-ever NHL Development Camp invitee. He (along with brother Eddie, of UMass) participated in the Carolina Hurricanes' version - a conditioning camp - last week. I had planned on just linking the invitee list with some kind of "see, it really happened" comment, but Examiner.com stepped in with a nice article, so thanks for that.

The AP also stepped in with a write-up (carried on NHL.com as well), which is nice if you want to see Olczyk in a white jersey. The Examiner had firstsies though, so they get the official honor.

I suppose this makes up for the origins of this particular NHL franchise. No wait, it doesn't. I hate Canes owner Peter Karmanos even more than I hate North Dakota. Thankfully, the world of horribly-animated GIFs offers an outlet:

According to his father, Edina (MN) High School forward Anthony Walsh is visiting Penn State this week. Check out the video and tell me you wouldn't love watching a guy who lives in beast mode in blue and white. Walsh has gotten hot as of late, both on the ice and in terms of his stock. He put up nine points in three Section 2AA playoff games to lead the section in scoring, then followed up the Hornets' season-ending state tournament loss with an impressive run of showcases, drawing the interest of both the Nittany Lions and Bowling Green in the process. Walsh, who just finished his junior year at Edina, will be attending camp at PSU in July and is presently trying to catch on with a USHL team for next season.


"I'm disappointed (the WCHA) broke up," he said, speaking to members of the Minnesota Associated Press Sports Association during its annual meeting in Minneapolis. "I would have liked to see it stay. My initial hope was Penn State would go to the CCHA. ... I think things would have been fine."

Me too, bud. Admittedly, my opinion is mostly borne of selfish concerns (as is his, I suppose, just different ones): I think the Big Ten, and the programs it contains, is a brutal situation for a new program. The CCHA offered more shades of grey and a more even distribution of the rungs on the latter. In the Big Ten, PSU will have to be above average just to avoid the cellar and probably one of the top 10 teams in the country just to finish in the top half of the conference. That's pretty daunting. The CCHA certainly offered top programs as well, including a couple of the same ones, but decidedly more opportunity to make progress in the standings without beating one of those programs.

It's all moot now, though. Time to move ahead with the hand we have. 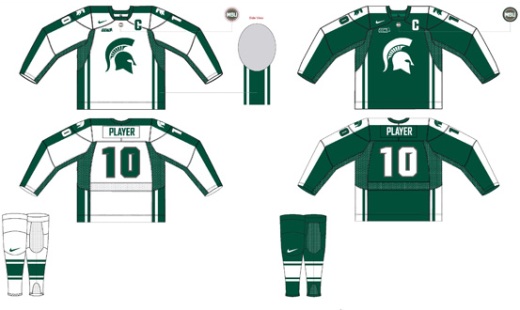 I really wasn't a fan of Michigan State's standardization of their athletic uniforms a couple years ago, because I think it's okay for individual teams to have their unique traditions, within university branding guidelines. When I did a concept Penn State hockey jersey, someone asked me how I could dare to put surnames on a PSU jersey. Simply put, I view the absence of names as a "Penn State football" thing, not a "Penn State" thing. In fact, Penn State basketball had names on jerseys for quite a while (with removal only in recent years), and non-revenue sports rarely include names, regardless of the school. The Icers, of course, had names - oversized ones, to boot - most of the time from roughly 1990 to the present, although they were removed from the blue jerseys for whatever reason over the last several years.

Anyway, one of those quirks lost in MSU's school-wide redesign was hockey's script writing, which is now back in the form of alternate jerseys. I elected to use the standard jerseys for the picture here, since that's what they'll likely wear against the Lions (still feels weird typing that) on January 25th and 26th. The major change in that department: the words "Michigan State" and the player's number have been eliminated from the front of the green jerseys in favor of the spartan helmet to match the whites.

Dickie Dunn wrote this, it's gotta be true! Well, okay, Dickie Dunn didn't write it. But everyone else is, so I'm inclined to believe it anyway.

A few months ago, when Rob Lowe started a rumor about American-style footballer Peyton Manning's impending retirement, I was appalled. Not at Lowe, but at the large number of hockey players on Twitter saying, essentially, "who the hell is Rob Lowe?" I get that you guys weren't yet born during the Brat Pack's heyday, but Dean MFing Youngblood. Figure it out. Jon Milley gets it, you should too.

Here's some early OU perspective on what might be the final, final chapter of the greatest rivalry in ACHA history.


[OU coach Dan] Morris said there is a possibility the Nittany Lions will stay on their schedule, but continuation of the rivalry is not favorable

"Now that there's Big Ten hockey and it’s on their agenda, (nonconference scheduling) might become a talking point," he said. "It's something we'd like to continue, but it’s something where we'll see."

NCAA teams generally play exhibition games against CIS (basically, the Canadian university version of the NCAA) schools every year, so in that vein, I'd love to keep an annual game with the Bobcats. The problem, though, is that ACHA opponents always count against the NCAA's 34-game limit, and a once-per-season exemption can be used for exhibition games against CIS teams. Since it makes little sense to treat CIS and ACHA teams differently, I'd like to see a similar exemption for ACHA teams. Not just for the sake of PSU-Ohio, but in order to help grow the ACHA.

I don't have Dan Morris on the phone right now to clarify, but reading between the lines of his quote, he seems to think that the large number of out-of-conference games in the world of six-team leagues might keep the door open a crack. However, because the ACHA doesn't exactly hold a position of power with regard to scheduling (or game exemption rules), and because surely PSU would rather not play an ACHA team against the 34 if at all possible, my advice is to enjoy the games against the Bobcats like they're the last ones you'll ever see.
Posted by Kyle Rossi at 1:19 AM