Guy Gadowsky, who was in Edmonton to watch his son Mac play in the Brick Invitational (a highly-regarded tournament for squirt-aged players played in a mall, which is awesome and reminds me of the Hartford Whalers), popped into the studio for the first hour of The Pipeline Show Saturday afternoon.

The Pipeline Show is a radio program broadcast on TEAM 1260 in Alberta's capital, but because of its depth, quality, and content is go-to listening for junior and college hockey aficionados across North America.

The full audio of Gadowsky's appearance is available here: Part 1 // Part 2 // Part 3 (all links are directly to MP3 files).

If you don't want to listen to the whole thing, I've transcribed some highlights below. Since this post is heavily based on third-party quotes, I'll do you guys a favor and skip overuse of the usual indent/italicize thing and instead set up Gadowsky's quotes with my comments, which are in italics for differentiation purposes.

Mac, by the way, went 1-2-3 - a W-L-T record, not me counting something - as a forward on the Connecticut Yankees and missed out on the Brick Invitational's playoff rounds. He scored a power play goal to open the scoring in one of those three ties, 2-2 against the BC Junior Canucks. And just because everyone loves kids playing hockey, here's Mac in his team's Habs-inspired unis: 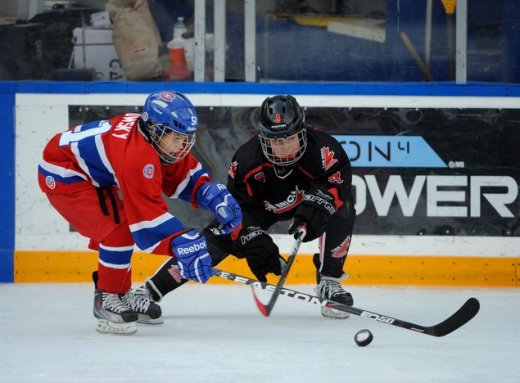 Anyway, here are some of Mac's dad's significant quotes.

It didn't take long for TPS host Guy Flaming to ask about The Scandal. I didn't transcribe Flaming's questions in most cases, but felt it was important to here: 'Has everything that’s transpired over the last year with the football program affected what you do with the hockey program?'

"No. I think there’s questions – as soon as it broke, there certainly were questions, and rightly so, parents called and had questions about it. Once it was established – Mr. Pegula was great. He came out and said, ‘look, I believe 100 percent in Penn State and what they do, and I am more committed than ever to have the best college hockey facility, I’m committed to that.’ In fact, he stepped up and added more money, and his commitment is fantastic. And I think once that was made public, nothing else was brought up."

They moved on to discussion of the highlights of the 2012-2013 schedule. Gadowsky, not surprisingly, singled out the Big Ten opponents.

"We are eligible for the NCAA tournament because we play over 20 NCAA [Division I] games. We play a couple of Big Ten schools. We go to Michigan State, we go to Wisconsin, so that’s going to be a tremendous experience for our young team and what it’s going to be like in the Big Ten…we’re [also] going around the state to a bunch of neutral site games to expand the brand."

Speaking of the Big Ten...

"I know for sure there’s been three other Big Ten schools that have contacted our administration and are very curious as to how [the transition to NCAA hockey] happened and what they needed to do. The reality is that the prerequisite to that is that you get a Mr. Pegula or Pegula family that’s going to give 100-odd million dollars. Those guys aren’t hanging off trees. So that’s the prerequisite and that’s hard to find. But I do think there’s a lot of interest – if they can get it done, I know there are Big Ten schools that would love to be a part of it."

Another schedule highlight is the Pittsburgh College Hockey Invitational. The future of the first-year tournament was touched on, and included a name drop of a certain current national champion interested in future participation.

"This is something, I think it’s going to be an annual event. I don’t know if Ohio State’s going to be in it every year, I don’t know that, or if Miami of Ohio is. I think that they want to celebrate hockey in the area, obviously right now with Penn State coming in, and in the future I think Boston College wants to come down, so I think they are going to switch a few teams. But we’re looking at making it an annual event."

Unfortunately, he didn't let the pairings for this year's tournament slip. He reviewed several players on the first PSU NCAA team, including what I believe are his first public comments on a couple of the incoming players beyond the standard one-line press release quotes. First, Reed Linaker:

"[He] was with St. Albert for a while before he got traded to Brooks. I think he put up 81 points as an 18-year-old in the AJ[HL], and had a lot of interest from a lot of other schools, including other Big Ten schools. He had a very good year, and had a knee injury, and he’s had a tough year this year but still, Brooks thought enough of him that they tried to do everything they could to get him for the push at the end. So he’s a guy that puts up points, he plays a gritty game. He’s not the biggest guy, but he plays a gritty game and has a great head. He’s got a great offensive mind."

"David Glen, captain of probably the most successful AJ team of the past few years, he’s just a heart and soul guy. Everybody you talk to that knows this guy, they love him. Nobody’s said a bad word about him. Nobody’s said an average word about him. It’s always been what a tremendous character guy [he is], you watch him play, he’s got skills, he’s a good hockey player, but he just has that intangible. You just look at him, you know he’s going to do whatever it takes to win, and that’s what he’s all about."

"He’s a guy who loves Penn State, knows what it’s about, wants to play in the Big Ten and realized it was a great opportunity to get in the first year on the ground floor to establish himself, and he did exactly that…he had a great year [last year]. He shoots the puck really well obviously. He’s pretty cerebral in the game, obviously his dad’s a great hockey guy, and he certainly has that mind. He scored a lot of goals at the club level, I’m hoping it translates, but I don’t know, I’ll find out along with you. But I do know he’s a great kid, he’s a 4.0 student, he’s a leader, he does things the right way, and he’s fantastic for our program."

"College hockey is very strong…the pace of the game, the size of the men, you have guys that go to college at 20 years old, so they’re 24-year-old men that have been lifting weights for four years with great strength coaches. It’s a league [where] it’s not so easy to jump in right away, and I think he went right out of high school to Minnesota, and probably wasn’t ready. That’s not a knock on him, that happens to a lot of people, and he’s a third-round NHL draft choice. But he went back to the USHL, matured a little bit, had a good year, and we expect big things out of him. I think he’s got great legs for a big guy and has a good head."

He called the goaltending situation a three-way battle at this point and talked about two of those three, Matt Skoff and P.J. Musico, in greater detail.

"It’s a battle. We expect one of the guys – the freshman coming in is Matt Skoff, and he played for Sioux City. I think he had the most wins in the past three years in the USHL of anybody…he’s a guy with a ton of experience. He’s a Pennsylvania guy, he loves Penn State, we expect big things out of him. You can YouTube him, he’s gotten the odd brawl. I love the guy. He’s a great guy, he’s an excellent student, and I think he’s going to do a great job for us."

"I like guys like [Musico]. He’s an older guy, he’s traveled around a bit. He played on the east coast, he played a little bit in the USHL, he played up in Flin Flon, he’s a weathered guy, I like goaltenders like that. And he’s a heck of an athlete. He’s a great surfer, great at whatever he does."

Gadowsky touched on the differences between recruiting at Penn State and at Princeton a couple times, and I've combined those quotes here.

"Every program has their positives and negatives, and I think you have to look at that and sell that, so every time you move, you’re sort of recruiting a different athlete. Obviously, Princeton had extreme academic standards that we had to abide by. Penn State’s a great school, it’s an excellent academic institution as well, but we’re probably going for maybe a little different – a guy that doesn’t need the SAT scores that we needed at Princeton."

"We did have [competition with major junior] at Alaska, and probably less so at Princeton, because the athletes that come to Princeton are committed to going to the very top academic institutions to begin with. And we’ve already seen [CHL competition] at Penn State…it’s two great options for hockey players, and they figure out which one’s best for them."


In a conversation about former Wisconsin one-and-done Kyle Turris, Gadowsky was asked if players who jump ship before graduation are bad for college hockey.

"I don’t think so. I think any time you get a year of education for an individual is a lot better than none. Obviously for the individual programs, they’d love to have a player like Kyle there for four years. But we understand that that’s not always going to happen. We still want to have great people – if they’re great people and great players, we want them in our program. If they can be as successful as Kyle in the NHL, I think that’s a positive."

There's something else that's a little different from Princeton, I suppose. Gadowsky's time on the air ended with a question about how he'll measure success this season.

“We’re really still trying to build a foundation, and the things that we hold important to us – in terms of how we represent ourselves, how we are in the weight room, and what kind of feeling we get, not only results, but how we’re committed to the classroom. One of the things you go to college hockey for is not just for hockey. [It’s] to expand yourself as a person, not only in academics, but as a person as a whole. If we can build a foundation where we have that environment that people want to come to our program, to graduate really quality people, you’re going to have a great education, a great hockey experience, you’re going to be developed as an athlete in the weight room…if we can establish a foundation for those things, we’re going to be a success.”

Previous to that though, he did call the Big Ten games this season a measuring stick.

"[Putting the Big Ten teams towards the end of the schedule] was a change. I think our first one was initially going to be in November, I didn’t think that was fair, so I’m glad to have them at the end. It will tell us where we’re at. Regardless, we have a ton of work to do, but it’ll give us an idea of where we’re at right now."
Posted by Kyle Rossi at 4:36 PM