This morning, the NCAA announced sanctions for the Penn State football program related to The Scandal. The most noteworthy of these are:
Reportedly, the university worked with the NCAA to help design this punishment, and PSU president Rodney Erickson has signed a consent agreement and stated that he accepts the penalties. Basically, don't expect an appeal or a lawsuit.

Let it first be said that I could not disagree more with the NCAA's intrusion in this matter. It would have been more appropriately left to the criminal and civil courts, instead of some seemingly unilateral (or bilateral if you count Erickson, who probably just sat at the conference table with his head down most of the time) process that didn't involve an independent investigation of any sort. It relied instead on the Louis Freeh Report, biases, flaws - yes, there are many of both - and all, and on the wave of public opinion it inspired, mostly from people who read Freeh's conclusions without critical examination of the evidence used to support those conclusions.

In doing so, it handed down a punishment that harms numerous people who had nothing to do with any of this. I don't believe the punishment even has much of a deterrent effect, as the ringer PSU has and will continue to be put through from other corners is more than sufficient in that regard. It certainly won't change the "sports is king" culture prevalent at universities nationwide.

I'll leave it to the "overall" Penn State blogs to lace into the NCAA further, though. Hockey is why you're here, so let's get into some analysis of that end of things.

In my judgment, the most significant hockey-centric news came not from the NCAA, but from the Big Ten, which piled on a couple hours later with:
If that represents the total of the Big Ten's punishment, crisis averted. I've maintained all along that the only punishment from this that would truly cripple Penn State hockey would be expulsion from the conference. Right now, it doesn't look like that is going to happen and Big Ten hockey will march forward as planned. Sorry about your luck, rest of the world (at least one media personality has called hockey a major reason why PSU didn't face that fate). Taking the broad view of things, it appears that the league has accepted the NCAA's punishment as appropriate and has more or less developed their sanctions to fit the spirit of the NCAA version.

College Hockey News may end up as the only entity outside of this blog (beyond fan forums, Twitter, etc. of course) offering analysis strictly from a hockey point of view. Here's part of what they had to say about NCAA sanctions, a hypothetical at the time the piece was written:


[It] would be a hit on the athletic department that could have trickle down ramifications for hockey, in terms of budget and recruiting, and so on.

I agree with that position, contingent on the appearance of the word "could."

The bottom line is this: we don't know. About any of that. The athletic department has been stashing away large surpluses for a while (including just south of $15 million 2010-2011), so it seems as if PSU is capable of taking what amounts to a direct hit of $14.6 million per year for five years without too much suffering. The longer-term concern, of course, is the continued profitability of the football program in light of the sanctions, which largely depends on their ability to remain competitive in spite of the scholarship limitations and possible coming transfers (I don't think the bowl ban will have a significant impact on whether people show up on Saturdays in October - the hard reality is that most bowls are meaningless, and I believe most people realize that). Football alone accounted for about $43 million of PSU's $116 million in revenue in 2010-2011, and that doesn't count items like Nittany Lion Club donations (the second biggest contributor at $18.5 million) that are largely based on football. A lot of non-revenue sports, if not in panic mode just yet, should at least be on notice.


But flipping back to hockey, the stated goal of administration is for it to be self-sufficient. That may or may not happen. Certainly, a paid-off arena and a boatload of endowed scholarships help on that front. If it's not self-sufficient, it becomes dependent on the athletic department's finances to some extent. If it is, administration could attempt to cut costs in order to turn that zero balance into a profit if things get tight enough. But as I've mentioned before, the average Big Ten men's hockey program costs $2.5 million year to run, and Penn State certainly has a guy capable of footing that bill in the absolute worst-case scenario. Terry Pegula won't let Penn State hockey face significant financial harm, I think that's more or less obvious to all.

Recruiting? Short of asking a representative sample of PSU targets how they feel, that's going to be a tough one to assess (I don't plan on doing that - I have no interest in calling uncommitted high schoolers at dinnertime to get a top five, then charging you to read the answer). Sure, we know of at least one case where it's been an issue, but if recruiting lags in the coming years, how much of it is this and how much is "new and (possibly) uncompetitive program?" We just don't have much of a track record from which to develop an intelligent opinion. In any case, Guy Gadowsky didn't seem overly concerned about it recently:


"I think there’s questions – as soon as it broke, there certainly were questions, and rightly so, parents called and had questions about it. Once it was established – Mr. Pegula was great. He came out and said, ‘look, I believe 100 percent in Penn State and what they do, and I am more committed than ever to have the best college hockey facility, I’m committed to that.’ In fact, he stepped up and added more money, and his commitment is fantastic. And I think once that was made public, nothing else was brought up."

I don't really believe the technicality of NCAA and Big Ten sanctions in place significantly changes anything. This has been in the news cycle more or less constantly since last November, and people have already made up their minds on whether to see Penn State as something larger than The Scandal.

Football is certainly the most visible part of Penn State, and has been for a long time. It can even be argued that, despite everything the school has going for it in terms of programs and research, football was the single largest contributor to PSU's academic reputation as well. If you accept that assumption - and I think most do - the school's institution-wide reputation has taken a major blow, regardless of women's volleyball, THON, or whatever "more than football" examples you want to throw out there. Sure we, as Penn Staters, know better, the world at large does not. Unfortunately, the world at large is going to be vital for the hockey programs in many regards, perhaps most importantly in recruiting, but also in terms of things like sponsorships.

At the same time, I think it's important to remember that each sport at a university has its own niche following and is perfectly capable of building a juggernaut program, and the larger following that goes with it, with or without football. Boston University does okay for itself in hockey without a football program, as one example. Several other highly-successful hockey programs operate at schools with an irrelevant football program or without one at all - in fact, it's pretty hard to find Big Football schools that even have DI hockey outside of the Big Ten. Seemingly, the only major impact in cases where football is diminished in some way is that hockey becomes more, not less, important. Sure, people like all teams associated with the school, but at the end of the day, they do compete for time, attention and dollars. And there are really only four college sports capable of enough interest to stand on their own merits (two of those, baseball and hockey, are largely regional, of course).

Penn Staters, most of whom share my opinion on these sanctions - I'll admit to unscientific sampling there - might also react in a way unanticipated by the NCAA: by increasing their support in an act of defiance. That may or may not include football, but it almost definitely would include basketball, wrestling, volleyball and yes, hockey. Certainly, this sign outside of Beaver Stadium over the weekend might represent some indication of that sentiment. 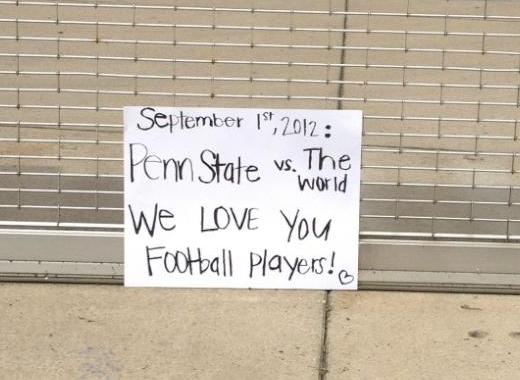 Penn State vs. The World? Fine by me. Fine by most of us, I think, and that's sort of my point.

Despite the unknowns, and there are many, I continue to believe that Penn State hockey can survive and thrive, in spite of these sanctions. In fact, I believe Penn State football will ultimately be okay too once the pound of flesh has been taken, but that's for a different blog.
Posted by Kyle Rossi at 12:51 PM