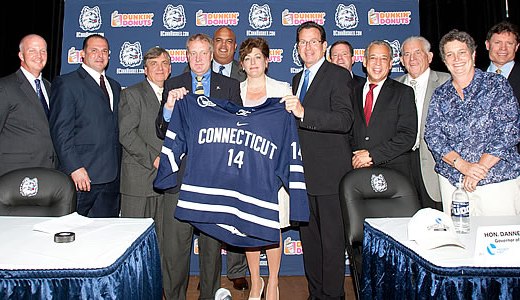 This post is not about Penn State. Yet it is.

I'll start at the beginning. On Friday, following their acceptance of Hockey East's invitation to become the 12th team in the league, the University of Connecticut hosted what's been called a "celebratory event" at Hartford's XL Center. It had all the trappings of a pep rally, including predictions of success from people probably not qualified to make such predictions. Just to single a couple out, here's Connecticut Senate Republican Leader John McKinney:


"Not to put too much pressure on coach (Bruce) Marshall, but it won't be long until the next Jonathan Quick (Hamden, Conn., native - Massachusetts) or Max Pacioretty (New Canaan, Conn. - Michigan) or Cam Atkinson (Avon, Conn. - Boston College) aren't going to BC or Michigan or UMass. They'll be going to UConn and we'll be winning plenty of hockey games."


"We plan on being a major force in collegiate ice hockey. Joining Hockey East is an unbelievable honor for us. I wrote a letter to the other league presidents and told them we're going to bring a lot of excitement and a lot of fans and we'll see them on the ice."

Right off the top, I have to admit that I found UConn's event a little gauche at first. I've sincerely never heard of hosting a "party" to celebrate a conference move (beyond the standard press conference, of course), and there's been enough moving done over the last couple years that I feel like I'm working with a decent sample size. That said, I'm glad they're excited, because as I've said, a strong Huskies program is good for college hockey. Yes, they have some growing to do, but it's nothing that can't be accomplished with commitment and hard work. Given that going from zero to 18 scholarships is not cheap, they deserve the benefit of the doubt in that regard. Great, story over.

Or is it? See, for whatever reason, the backlash to the UConn event has been swift and harsh. Take, for example, this post from Boston College blog BC Interruption. In reacting to McKinney's quote above, they wrote:


And this is based on... what, exactly? Some fun game you played in your head where UConn was suddenly this really attractive school for hockey recruits? This is one of those things that just smacks of ignorance. You have no idea what in the hell you're talking about, do you, Senate Republican Leader John McKinney? Some secretary just slapped this on your list of crap to do today and you were like, okay sweet. That's exactly what happened, isn't it?

These kids playing hockey in Connecticut aren't dumb. They have been living hockey for the last dozen years. They know college hockey. They know the top schools. You think just because "hey, UConn has a team!" all these top recruits are going to flock to UConn, instead of the top hockey schools in the country?

Really, BC Interruption? It's a pep rally. Things get said. Often, those things are outlandish. Pep rallies are exempt from "normal" rules for that reason. Guarantees of victory, for example, often happen at pep rallies before big games. Yet they're never reported, and if the team in question wins, the person making the promise doesn't achieve Mark Messier status. Regardless, I'm not sure why the clear best program in the country over the last decade or so cares about it in the slightest. So easy there, hero.


I think it's funny how some in the PSU fan base seem to think that they are just going to start a hockey program and start competing with the big boys of the college hockey, these are the same in the sport that have had programs for a very long time.

Ah, there it is. That November 2010 quote is from TYT BFF Eric Burton, aka NDGoon of Goon's World, aka guy who shouts "OMG PAGEVIEWS!!!" in response to any and all criticism of his typically fallacious thought processes (unfortunately, he left the quote as a comment on a different blog which has since gone out of business, so you'll just have to trust me).

For the life of me, I can't figure out what drives supporters of two of the historic giants of college hockey to go out of their way to attempt to put new or newly recommitted programs like Penn State and UConn in their place. I suppose the first answer that jumps to mind is "insecurity," but why? I mean, they're great, we suck, end of story, right? What's their issue? We're rightfully excited to be a part of the big time? Why is that any of their concern? I suppose if hockey's entering a new world of big schools and big TV money, that might work out better for PSU and UConn than for a North Dakota, Denver or Minnesota-Duluth. But I don't think anything like that is imminent, and I'm guessing they don't either.

I'll leave it to them to explain their motives if they wish. But in the meantime, let's look at the substance of their claims: the idea that "top hockey school" is an inflexible label and that having programs "for a very long time" is a competitive advantage that can't be overcome.

Colorado College and Michigan are both interesting cases. They were arguably the two best programs in the early years of the NCAA's sanctioning of hockey. Michigan won the very first NCAA title in 1948 and added six more by 1964. CC won in 1950 and 1957 and were always in contention for the first decade of the NCAA championships.


A funny thing happened, though. In spite of all that success, both programs fell off the map. Michigan had 25 rough years between their 1964 championship and 1989, six seasons into Red Berenson's tenure. The Tigers topped that, enduring 35 seasons of brutality that even Guy Gadowsky and his sick flow couldn't halt (he played at CC from 1985-1989) and nearly seeing their program end amidst the demolition of the Broadmoor World Arena in 1994.


Yet after literally decades of mediocrity (or worse), both programs bounced back. CC ripped off 10 NCAA tournament appearances in a 12-year stretch from 1993-2006. Michigan has done even better, as they currently own an unreal 22-year streak of NCAA appearances, which includes a pair of national titles. Both are accepted as national powers despite their long periods without success.

Also accepted as national powers: Maine and Miami. The Black Bears started up in 1977 and within 22 years owned a pair of national titles. Miami, established in 1978, was awful into the 1990s until George Gwozdecky started to rebuild the program and Enrico Blasi finished the job. Northern Michigan was born in 1976 and won a national title in 1991. Lake Superior State has never been a particularly successful program other than between 1984 and 1996, but found three national titles under Frank Anzalone and Jeff Jackson. Bowling Green started in 1969, was the 1984 national champion, and following Jerry York's departure to Boston College (which endured six straight losing seasons before and just after his arrival, by the way) in 1994 began a long descent that nearly ended with the program's termination a couple years ago. Notre Dame actually dropped to club hockey during BG's championship season yet was coveted by just about every conference during the CCHA's dismemberment, eventually preceding UConn into Hockey East.


Let's get one thing straight: the landscape changes. It's a highly-competitive sport, and if your skates dull for even an instant, you're in trouble with plenty of programs working hard to take your spot on the mountain. Being good now doesn't guarantee being good ten years from now. Being bad now doesn't guarantee being bad ten years from now. Sure, it may be a predictor, but inertia can be and often is overcome, in both directions. And being around forever? Princeton's been playing hockey since 1901. Gadowsky coached there for seven years and led the Tigers to two of their three NCAA tournament appearances. Ever. Brown is the third-oldest program out there and has been Division I since there's been a DI. Anyone betting on them in a hypothetical matchup with Union, which has been in DI since 1991, at the moment?

I could go on, but I think I've made my point. Yes, there are also programs like UMass and Minnesota State, which haven't really done much of anything since elevating to DI in 1993 and 1996, respectively. But a very good proportion have. Some programs generally stay on top, some generally stay on the bottom. But that's a guideline, not a law. Penn State's starting on the bottom and UConn's "starting" close to the bottom, but that doesn't mean they'll be there forever. I'm not promising that either will be successful, because it's by no means an easy process, but I am promising that they're not precluded from the possibility of it.

So there it is. If you're interested in more, I took a closer look at the last five programs to go from nothing to DI (UNO, Miami, Maine, Northern Michigan and Alaska-Anchorage) and how they compare to Penn State in a two parter (Part I, Part II) back before anyone read this blog.
Posted by Kyle Rossi at 12:22 AM