A Day at NCAA Regionals 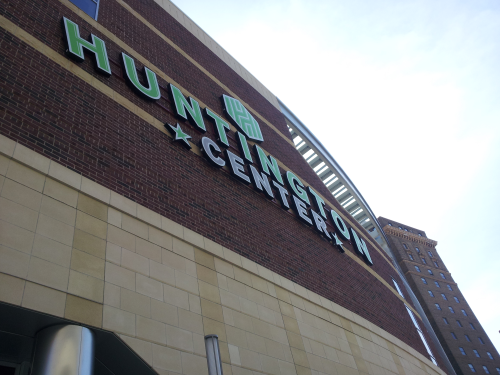 A few reflections on a day spent in Toledo, OH for the NCAA Tournament's Midwest Regional first round on Saturday...

For someone more used to the determination of an ACHA national champion than to the similar process of the NCAA, and in the interest of informing other Penn Staters, it may help to start with a few differences between the two, because ACHA National Tournaments are in fact significantly different than what we'll eventually see in NCAA Division I. First off, there's the number of teams - in the opening two days of the ACHA Division 1 championships, attendees cross paths with 20 different teams in the same ice facility, while in the NCAA, there are never more than four teams at any one site, which doesn't really offer nearly as much in terms of the sheer spectacle (I mean really, it's two games one day, one game the next day... as someone used to eight hockey games in one day on two adjacent sheets at ACHAs, big deal).

The second major difference is closeness. With the ACHA, it's not at all uncommon to mingle with teams watching other games from the stands or leaning up against the glass, while at NCAAs, teams maintain that degree of separation that comes in big-time professional or college arenas. Additionally, in the ACHA, people are sort of taken aback by the presence of "pure" fans or media - really, people in attendance who don't have a relative on the team and aren't part of a team's staff aren't all that common, even at nationals (at the recent ACHA women's tournament, I had issues getting a complimentary tournament pass, largely because the idea of someone like me independently covering the tournament was completely off the map for the event's staff).

I'm not trying to pass qualitative judgment on those differences here. They just are.

That last difference - the presence of fans - is something quite unique in NCAA hockey, particularly at the Frozen Four.

I attended the 2010 Frozen Four, and made a fairly egregious rookie mistake: I wore an RIT shirt, as they were my favorite team in Detroit that year. Long story short, despite an ignored up-front explanation of my status as a Penn State alumnus, I ended up spending most of the Tigers' blowout loss to Wisconsin talking about RIT to four bottled New Hampshire fans in front of me. How many people go there? What are its most competitive majors? I broke down and faked knowledge of my "alma mater" well enough to satisfy them, then wore an Icers jersey when I returned for the championship game two days later. Lesson learned. You don't pick a "tournament team" in NCAA hockey - it should probably be noted that UNH wasn't in the Frozen Four that year, yet four guys in head-to-toe Wildcat gear made sure the school was represented there.

Regionals are the same way, on a much smaller scale. In Toledo, Miami and Notre Dame had the best numbers, as one would expect due to proximity, while Minnesota State and St. Cloud State were much less represented, but certainly present. Host Bowling Green had a few fans there, as did Ohio State (with hockey-specific gear, so I'm reasonably confident that they weren't merely a few of the Walmart Buckeyes that dominate the state, not to mention the fact that they would have had to skip OSU's basketball team in that NCAA Tournament to be there). Relatively close Michigan had a few, and numerous other schools had singles, including every remaining Big Ten school - my hoodie and some serial killer-looking guy in a 2010 Capital One Bowl t-shirt took up for PSU.

No, there weren't 20 teams there, but in a way, there were even more than that. And that makes it a blast. Even when they're drunk and think you went to some other school, it's fun interacting with fans from around the country who you wouldn't ever meet but for the NCAA Tournament. This time around, I sat next to a Miami fan who, it has to be said, knew next to nothing about hockey, but was as passionate about it as anyone I've ever seen, in talking during the game, belting out the school fight song (which I believe uses the phrase "love and honor" about 72 times) and participating in all of the usual chants (including "it's all your fault" at the opposing goalie after an empty-netter, which doesn't make a ton of sense to me). I didn't want to root for the RedHawks against Minnesota State, but enthusiasm is contagious, as is often said. That same Miami fan was going hard for St. Cloud State over Notre Dame, and got exactly what she wished for, at least until the Huskies throttled the RedHawks the next day to represent the region in the Frozen Four.


The present NCAA Tournament format, which divides 16 teams into four regions, with the four regional winners meeting at the Frozen Four, is frequently criticized, largely because of punchline-worthy attendance numbers. In other words, there are fans there, they represent many different schools proudly, there just aren't enough of them. Toledo's first-round attendance was 2,988 in a building seating 7,389, the second-lowest number of the four regionals. The West Region in Grand Rapids, MI brought up the rear with 2,289 in 10,834-seat Van Andel Arena. The East and Northeast Regions were much better with 6,253 (of 11,940) in Providence, RI and 8,049 (of 9,852) in Manchester, NH.

The hockey is great, it's entertaining to attend, the atmosphere can be fun... so what's the problem? Why doesn't the draw of the NCAA hockey regionals measure up to, say, the NCAA basketball tournament, or even the Frozen Four (that 2010 event had 37,592 at Ford Field's championship game, a record draw for an indoor hockey game)?

Interestingly enough, I recently attended a segment of the basketball tournament as well, the second and third-round sub-regional in Auburn Hills, MI, which I believe can offer some insight, as there's no perceived attendance issue there. Notably...
One frequently proposed solution to hockey's attendance woes is to move the tournament back to campus sites, a position recently advocated by my buddy Eric Burton.


It’s that time a year again, Division I college hockey soon will be taking center stage in the NCAA regionals playing in half empty arenas, in venues in cities across the USA.

It’s a yearly occurrence for college hockey, because we can’t have any more regionals on campus. God forbid, we can’t have playoff games in rowdy arenas stuffed with rabid fans.

The NCAA wants regional games played in arenas posing as quite emotionless mausoleums, all under the guise of the regional being held at “neutral” sites.

[In]essence, yearly, the NCAA is giving the eastern teams in the NCAA Division I hockey tournament home games. It’s no wonder they don’t want to move the regionals back on campus. Why should they? They might have to play a Michigan, North Dakota, Minnesota, Denver at their home arena. We can’t have that, they might not have an easier path to the Frozen Four.

That strikes me as shortsighted and driven by self-interest with a healthy dose of paranoia (why does the NCAA favor eastern teams... oh right, because his team isn't an eastern team.), particularly as long as the volatile PairWise Rankings are used to determine things. Under PWR, flipping a game result or two can turn the entire seeding on its ear, and that's not a decisive enough "win" in my opinion to take the step of forcing a deserving team to play a road game in the NCAA Tournament. The NCAA Tournament isn't a conference, where two teams played a full, generally identical round robin schedule and one had a better record than the other, it's "hey, if that game between two teams not in the tournament back in November had gone the other way and your opponent was a Team Under Consideration, we'd be playing at your barn instead of ours... I'm sure you'll find it hilarious later." 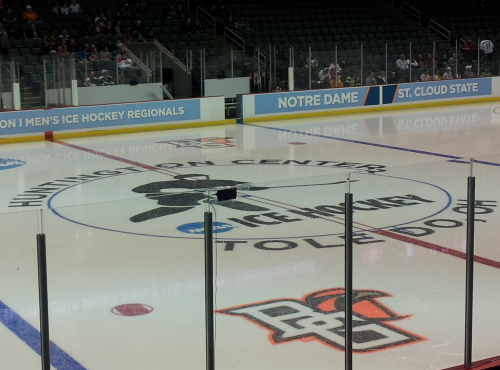 I believe instead that hockey should take a few lessons from basketball, which seems a fairly obvious exercise. Limit things to an East and a West Regional. Invite eight teams from each to a major-city neutral site for four games on day one, and two more on day two. Both day two winners advance to the Frozen Four. Continue the practice of placing teams to maximize attendance, because again, the idea of "bracket integrity" seems like a silly concept, given the fragility of PWR.

As long as the two host cities aren't Boston and St. Paul every year (I'm thinking something like Denver, Chicago, Minneapolis-St. Paul, Detroit in the west, Boston, New York, Philadelphia, Pittsburgh in the east, with sites furthest from the Frozen Four preferred on a year-to-year basis to keep this thing accessible), I think it's a great concept. Neutral sites keep the integrity of the competition and hockey's status as a big-time sport worthy of the distinction intact. Major cities provide a destination experience that Toledo and even campus sites just can't. The system also maintains that co-mingling of people from all over college hockey, what makes this whole thing unique and worth preserving - I have no doubt that campus sites would deter visiting fans and neutrals from attending, even if seats are allocated evenly.

But whatever solutions may or may not be down the road, I actually don't think the present system is all that broken. The NCAA clearly doesn't have too much issue with the attendance, or they'd change things. And I had a good experience as a neutral fan. Did I see the Miami fanbase in its full glory, as I would down at Goggin? No, but the NCAA Tournament experience isn't about that, nor should it be. I can't wait to attend one where I have a strong rooting interest.
Posted by Kyle Rossi at 1:28 PM