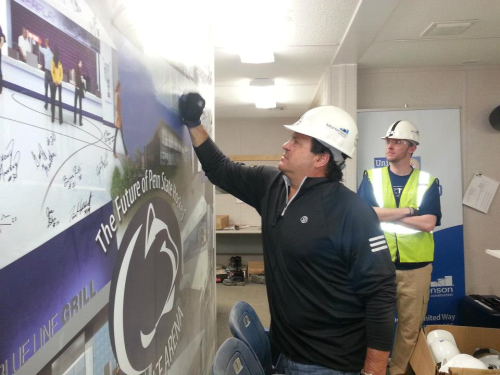 Given Joe Battista's well-known affinity for Notre Dame, a PSU-ND series seemed inevitable once the Nittany Lions' NCAA program was going full blast. And sure enough...

2. Surround Yourself with People Who Make You Better!
(statecollege.com)

Battista devoted his weekly column to singing the praises of new babysitter for incompetent Board of Trustees hand puppet Dave Joyner Athletic Department Special Assistant for Operations Morris Kurtz. Kurtz, a former Icers head coach with two degrees from Penn State, recently completed 27 years as the athletic director at St. Cloud State (a period that included a Division I hockey elevation and the construction of an arena) and should be a fantastic addition to PSU's leadership.

Miracle on Ice captain Mike Eruzione visited Penn State last Wednesday to speak at Eisenhower Auditorium, tour Pegula Ice Arena (leaving behind an autograph, as seen above) and pose for photo ops with the Nittany Lion men and women. During Eruzione's talk, one exchange between the former Boston University star and a PSU undergrad quickly gained legend status on Twitter and elsewhere:


In a crowd filled with United States flags and jerseys, Tyler Feldman stood up to ask Mike Eruzione the famous questions from the 2004 movie, "Miracle."

"Who do you play for?" Feldman (freshman-business administration and broadcast journalism) said.

The article is behind a pay wall, but here's the juicy part concerning the younger Moore, who was actually born in Sweden while his father was playing there professionally:


Moore hopes to play at the Division I level. He grew up wanting to emulate his dad by playing at UMD. While the Bulldogs showed some interest early on, Moore’s primary Division I suitors now are Alabama-Huntsville, Bemidji State, Penn State and Rensselaer Polytechnic Institute.

“I’m not saying that my hope of ever going (to UMD) is over because it’s not … but as the years have gone on, I’ve realized how much more there is out there,” he said.

Terry Pegula's other ice rink, the HarborCenter complex across the street from the Sabres' home First Niagara Center in Buffalo, officially broke ground on Saturday. HarborCenter, which is scheduled to open in September 2014 and carries a price tag of $172 million, will include two NHL-sized ice sheets, a hotel, a restaurant, retail space and a parking garage. The main rink will seat 1,800 and is expected to host NCAA Division I's Canisius, which presently plays its home games on the campus of DIII Buffalo State.

It wasn't all sunshine and puppies for TPegs last week, as he was grilled about the state of his NHL franchise at the HarborCenter groundbreaking. At his introductory press conference after purchasing the Sabres in February 2011, Pegula made a few rookie mistakes, like promising Stanley Cups (with an 's') and offering an insane-in-hindsight three-year timeline for reaching that pinnacle. Since then, the Sabres haven't looked much different than they did near the end of the stewardship of previous owner Tom Golisano - in other words, they've been a middling team that competes for a lower playoff seed in most years, qualifying roughly half of the time. The unexpected struggle has caused Pegula to back off of most of his initial statements (including the one where he supported long-time head coach Lindy Ruff, who was canned this season).


Pegula noted that it was 39 years for Boston Bruins owner and WNY native Jeremy Jacobs to win a Cup before the Bs did in 2011. Pegula, of course, had made it clear he had a three-year vision when he took over the Sabres in 2011.

"Jerry Jacobs down the road took 39 years to win a Stanley Cup. I don't know how long," Pegula said. "How can you guarantee anybody anything? You do your best every year. When's the last time the New England Patriots won the Stanley Cup? Or the Super Bowl?"

I reminded Pegula the Pats don't regularly miss the playoffs and he said, "Well, hey." Whatever that means.

Ouch. It certainly seems as if the honeymoon - which was unlike anything I've ever witnessed for a team owner - is over, at least as far as the Buffalo News' Mike Harrington is concerned.

Speaking of Buffalo's major newspaper, it gave incoming women's defender Kelly Seward a mention for reaching the USA Hockey Girls Tier I 19U quarterfinals with the Buffalo Bisons during the national championship tournament held April 3-7 in San Jose, CA, as well as for her CISAA and NAPHA titles with Nichols School this past season.

Programs that Penn State is playing next year are being gashed with early pro departures (toss in Michigan defenseman Jacob Trouba from last week's Three Stars as well). I don't hate it.


To be eligible for the award, a student-athlete must be classified as an NCAA Division I senior and have notable achievements in four areas of excellence – classroom, community, character and competition.

An acronym for Celebrating Loyalty and Achievement for Staying in School, the Senior CLASS Award focuses on the total student-athlete and encourages students to use their platform in athletics to make a positive impact as leaders in their communities.

Rocha's parents, in case you forgot at some point since PSU's game at West Point in October, are quite familiar with Penn State. His father, Larry Rocha, was an Icers assistant coach from 1982 through 1985, and his mother is lacrosse legend Candace Finn Rocha, a two-time national player of the year who led the Nittany Lions to a pair of national championships and was elected the National Lacrosse Hall of Fame in 1998.

Potential destinations for NCAA Division I hockey
(The Hockey News)

The latest iteration of the popular "I have nothing better to write about" article calls Nebraska, Southern California, Texas, Rhode Island and Saint Louis likely next outposts for NCAA DI hockey. I'll give that a score of roughly 60 percent: full credit for Nebraska and Rhode Island, half credit for Texas and USC.

What better way to close a Three Stars post headlined by Mike Eruzione than with a nod to Team USA winning gold at the IIHF Women's World Championships last week with a 3-2 win over Canada in the final? University of Minnesota junior Amanda Kessel was the hero of the decisive contest in the Canadian capital of Ottawa, as her third-period goal clinched the U.S.' fifth world championship gold medal (and fourth from the last five tournaments, which are held in non-Olympic years). It also capped a pretty ridiculous couple of weeks for Kessel, the sister of Toronto Maple Leaf Phil Kessel, who led the Gophers to the national championship by completing the first perfect season in NCAA women's hockey history on March 24th. The day before Kessel registered four points in a 6-3 win over Boston University in the title game, she won the Patty Kazmaier Memorial Award as the nation's best player.

Basically, if Kessel wanted, she could quit the game right now and be giving speeches about her accomplishments 33 years later.

The CHA was represented on Team USA by goaltender Brianne McLaughlin, who played at Robert Morris from 2006 through 2009 and is the NCAA's all-time saves leader. She's also been an assistant coach with the Colonials for the past two seasons, a period that includes RMU's CHA tournament championship in 2012.
Posted by Kyle Rossi at 3:06 AM