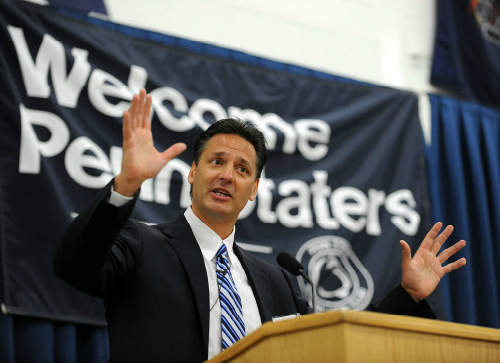 Penn State announced today that Guy Gadowsky will join the second Coaches Caravan, the offseason tour of Nittany Lion coaches from different sports across PSU-friendly cities and towns across the commonwealth and beyond. Here are the juicy parts of the release:

Joining Gadowsky and [PSU head football coach Bill] O'Brien at the May 9 events will be head men's volleyball coach Mark Pavlik. At each Coaches Caravan stop, Penn State alumni and fans will have the opportunity to hear from Coach O'Brien and at least one other head coach and ask questions about the Nittany Lions' nationally recognized 31-sport athletic program at a lunch or evening event.

The upcoming event is a scaled-back version of the 2012 Coaches Caravan, which hit 18 stops in seven different states, and featured both Gadowsky and women's coach Josh Brandwene. Twelve stops on six different dates are on the menu this time around, but only three stops (none of which include hockey programming) will take place outside of Pennsylvania.

Gadowsky, as mentioned in the release, will appear on May 9th in DuBois and Pittsburgh, PA at 11:30 a.m. and 6:00 p.m. respectively, along with O'Brien and Pavlik, two of the four coaches who joined the Edmontonian at his caravan stops last year (the others were Brandwene, who is sitting this one out, and women's basketball coach Coquese Washington, who is once again participating, but on a different date). The DuBois event will be in the Penn State DuBois campus gymnasium - the address is 1 College Place in DuBois - while the Pittsburgh reception will be hosted by the Sheraton Station Square at 300 W. Station Square Drive.

The non-Gadowsky stops are April 30th (Reading and Philadelphia), May 1st (Baltimore and Washington DC), May 2nd (Lancaster and Harrisburg), May 7th (Williamsport and Allentown) and May 8th (New York City and Scranton). O'Brien will headline each one, but the other coaches participating vary.

I'll break script at this point and offer a personal endorsement for the Coaches Caravan, as I greatly enjoyed my experience at the 2012 stop in Cleveland, at a time when I really needed an injection of Penn State pride. Gadowsky, if you've never conversed with him, is an extremely charismatic and engaging personality who, without fail, leaves anyone speaking with him feeling like he or she the most important person on the planet. And feeling like there's no limit on the potential of Penn State hockey. Attendees may even get in on the ground floor of some news, as happened last year when Gadowsky and O'Brien both threw their support behind the idea of a hockey game at Beaver Stadium. I strongly encourage anyone able to join in.
Posted by Kyle Rossi at 6:11 PM