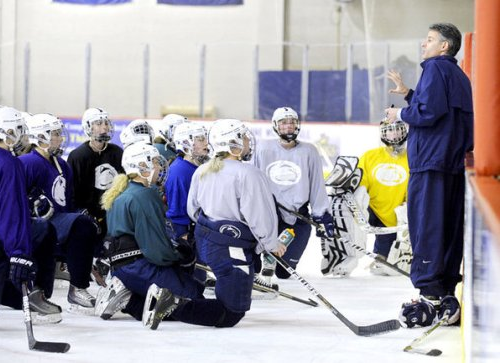 A rare bit of Commonwealth Campus recruiting news: Luk Devorski, who just captained Hershey High to the Bears Cup title, plans to play hockey at PSU-Altoona next year. Devorski is the son of NHL referee Paul Devorski, which means that between Luk Devorski and Steph Walkom on the NCAA women's team, Penn State has clearly tapped the abundant "kids of NHL referees" pipeline.

James Robinson, our newest NCAA commit, gets the Dzurita - and apparently, he decided to go to Penn State without ever visiting campus. Here's Robinson on how that's possible:


“When I met with both [Coach Gadowsky and Coach Fisher] in person, they really stressed the academics of the school and how good it was. A combination of that and Coach Gadowsky’s track record making weaker teams into stronger teams helped out. His resume really did it for me.”

Score another for people over buildings. Just saying. 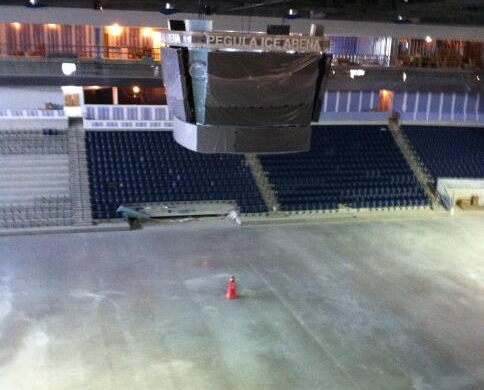 While I have yet to be invited on a Pegula Ice Arena tour - I'm not exactly well-liked by administration if you haven't heard - I have no problem acknowledging when a guy like Rob Greissinger does a good job documenting things, as he did on Friday. And yes, for the 85th time, seats.

College hockey is enjoying a renaissance on eve of conference shuffle
(triblive.com)

Guy Gadowsky is quoted in this article, and although I wouldn't exactly file it under "breaking news," it's still a nice look at what has been a surge in popularity for college puck ahead of the Pittsburgh-hosted Frozen Four next weekend. Whatever you think of the imminent changes, there's very little doubt that as of April 1, 2013, the game is as healthy as it's ever been - and that's really exciting.


Jennifer Heppel, Big Ten associate commissioner for governance, said that unlike realignment in football and basketball, money was not the motivation.

Here's Joe Battista on the Miracle on Ice, since Mike Eruzione is speaking at Penn State on April 10th... hockey players talk about "living the dream" a lot, but Eruzione has to be the final word on it. Have one good game, make a living talking about it 33 years after the fact. No disrespect meant of course, he's earned it obviously... although it has to be said that Mark Johnson chose a slightly different route.

Far more of a powerhouse than the number one overall seed in the NCAA Tournament this year and a Frozen Four participant? Coming from the guy who picked Wisconsin (which lost 6-1 in their opening game) to win the national championship? Eh... I'll still take it.

I don't hate Michigan as much as most Penn Staters - the lifelong Ohioan thing probably as something to do with it - so seeing their side... well... kind of okay about seeing their 22-year streak of NCAA Tournament appearances end this year doesn't bother me. I suppose we have to start knowing the other Big Ten teams almost as well as we know our own, and this look at the program heading into the offseason is as good of a place as any to start with the Wolverines.

PSU commit Chase Berger was named the St. Louis Post-Dispatch's All-Metro Player of the Year after leading Saint Louis University High School to the Challenge Cup, the Mid-States Club Hockey Association's championship trophy. It was the first title in SLUH history, won after Berger delayed his entry to the USHL with the Tri-City Storm (who drafted him in the 2011 USHL Entry Draft) to take one last shot at it.

Iowa is starting a non-varsity women's hockey team with plans to join the ACHA by the 2014-2015 season... and elected to illustrate the news with a photo of Hannah Hoenshell against Lindenwood at the Ice Pavilion.

Michigan State coach Tom Anastos lays out his rebuilding plan for the Spartans, notable from a Penn State perspective because the Big Ten is apparently terrible (a good MSU would help fix that) and also because Anastos says that next year's league schedule is "not yet finalized," as the slates for non-Big Ten teams have begun to trickle out.

As a reminder, until we have a full schedule, I'm trying to assemble as much of it as I can here.

And finally: after 19 years, 443 wins and two national championships, George Gwozdecky - once given the Head Coach Candidate treatment on this blog back in 2010 - is done at Denver.
Posted by Kyle Rossi at 2:59 PM