Ahead of the Pittsburgh Frozen Four this weekend, CHN wrote a love letter to the growth of hockey in Pennsylvania, which includes plenty on Penn State, including quotes from Guy Gadowsky on his issues going out to eat during the Stanley Cup Playoffs. It also tossed in a...


More than 12,000 fans flooded the gates both days to see Penn State hockey play in Pittsburgh for the first time. (emphasis added)

...which bothers me a little (pretty sure "Penn State hockey" has played in Pittsburgh numerous times before). Unlike some people I could name, I'll assume the writer in this case meant well, so I'll overlook the error when scoring the piece as a whole.

Another pretty easy call for top star honors, because after all, gotta squeeze things like this in before the actual arena makes them obsolete (and it's pretty close to doing so). How could one not be pumped after watching that... right, commenter Ryan Progin?


I think the arena is disappointing.

From the not-at-all-surprising department, the agreement for Robert Morris' stand-alone game at the Ice Pavilion this past December included a return trip for 2013-2014.

Of course, we know that we're getting two home and two away against each of the other five Big Tenners, a total of 20 games. The Three Rivers Classic has been public knowledge for quite some time. There will be single home games with Army (the PIA opener) and RIT, a home series with Union and one at Air Force (all of which make sense, as each reciprocates a piece of the 2012-2013 schedule). All in all, that's 29 games against the NCAA limit of 34, so we're fairly close to knowing all of the opponents, although exempt games - Canadian exhibitions, trips to Alaska or contests with the National Team Development Program to cite three common examples - probably will push our game total over 34.

In a story that touches two favorite topics of TYT - future Nittany Lions and the Johnstown Tomahawks - incoming forward Rick DeRosa played a key role in ending the inaugural season of Central PA's NAHL entry in a winner-take-all first-round game three Sunday afternoon. The Tomahawks led DeRosa's Port Huron Fighting Falcons 3-1 with 7:01 left in regulation until the Aston, PA native deflected a power play shot home. He then assisted on a back-door play to tie the game with the Falcons just 35 seconds from elimination, allowing Ian Miller to pot the overtime winner. Port Huron will begin a North Division semifinal series against Soo on Friday.

The vanquished Tomahawks, who ended up with a 27-21-12 record and a fifth-place North Division finish, count PSU football legends Shane Conlan and Jack Ham as part of their ownership group.

Jensen has the ‘heart of a lion’
(redwingscentral.com)

Need a rooting interest for the Frozen Four? You could do a lot worse than St. Cloud State, which features Nate Jensen's cousin Nick, himself an outstanding defenseman. SCSU, as you should know by now, also had former Icers coach and new athletic operations special assistant Morris Kurtz as its athletic director for 27 years.

Of course, there's that whole NCHC thing, so if you go with Quinnipiac, Yale or UMass-Lowell (or all three, for that matter), I won't blame you.

Brother of George is having a Calder Trophy-worthy season with the Chicago Blackhawks and earned this fun feature that includes shoutouts to both big brother and Tommy Olczyk.

Time for the "troll the Big Ten" portion of the post. In an annual Minnesota tradition, Gopher fans are all whiny about a great season (a 26-9-5 record, a WCHA regular season co-championship and an NCAA Tournament appearance in this case) and want coach Don Lucia fired. Because SURELY, if the flagship program in the State of Hockey wasn't run by a total idiot, nobody would ever... zzzzzz. Lucia, to his credit, is trying to go Mike Gundy and deflect the heat from the college kids. COME AFTER ME! I'M A MAN! I'M 40!

Apparently nobody cares about Wisconsin hockey enough to show up anymore. While their announced crowds (tickets sold) averaged 9,521 for the season, and ultimately, that's what counts since it drives revenues...


Men's hockey (6,996)...posted the lowest average actual attendance figure [based on tickets scanned] for their sports in the seven years of data kept by the athletic department.

Ouch. The Nittany Lions' game in Madison on February 25th - PSU won that game, because yeah, I'm going to slide that in - was a primary culprit with an announced crowd of 9,078 but an actual crowd of 5,338. This data, by the way, was obtained through an open records request, since public universities that aren't Penn State have to comply with those.

Michigan blueliner Jacob Trouba went pro after a single season in Ann Arbor, declining to join a long list of star Wolverines players who have left college with a degree, like... ummmm... eh, nevermind.

Just to end this thing on a positive note... 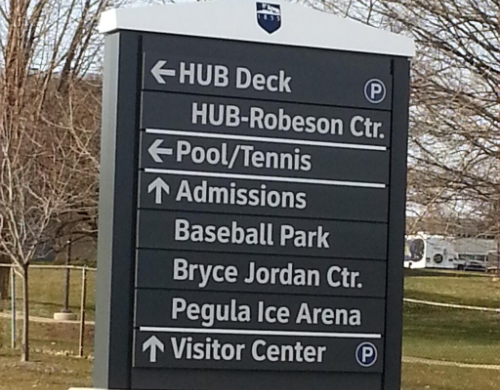