Penn State will once again play Vermont at Philadelphia's Wells Fargo Center on October 26th at 7:05 p.m., news that leaked during the Philadelphia Flyers' home game against the New York Islanders Thursday night.

The leak took the form of advertising tickets for the event, as they go on sale Monday (that's this coming Monday, April 29th) at 10:00 a.m., and will be available through ComcastTIX.

A stick tap is in order for Philly native and Schenectady Daily Gazette writer Ken Schott, the first media personality to report the news on any sort of formal level.

The game, as mentioned by Schott, is a carbon copy of one played January 19th where, in front of sellout crowd of 19,529, the Nittany Lions topped the Catamounts 4-2. Goals from Taylor Holstrom, newly-minted alternate captain David Glen and Justin Kirchhevel pushed PSU to a 3-0 lead midway through regulation. Those tallies, along with another by Casey Bailey in the third period and Matt Skoff's 34 saves, were enough for the victory in what was dubbed the Philadelphia College Hockey Faceoff. If you feel like reliving that night - and why wouldn't you? - here's TYT's coverage of what ultimately became just one of several high-profile wins during Penn State's inaugural NCAA season:

PSU's triumph contributed to a five-game losing streak for UVM, which went on to finish 11-19-6 after losing to Boston College in the Hockey East quarterfinals.

The involvement of the Catamounts, a program with little obvious connection to Philadelphia, in the Wells Fargo Center game is largely the result of people of power and influence understanding how to pull strings. UVM defenseman Nick Luukko, who will be a junior during the coming season, is the son of Peter Luukko, the president of Comcast Spectacor. Comcast, among other things, owns both the Flyers and the Wells Fargo Center. Additionally, Nick was a fifth-round draft pick of the Flyers in 2010 (I wonder how that one came to pass), so hopefully he goes pro after 2013-2014, opening the door for a program people actually want to see to play PSU in south Philly.

That said, last season's tilt was a fun event that moved a lot of tickets in spite of the opponent, and the replay in October will likely live up to the original.

Penn State's full schedule will likely be officially revealed within the next six weeks, although including Vermont, 30 games have become known through alternative sources. Army will open the Pegula Ice Arena on October 11th, and the Nittany Lions will once again participate in the Three Rivers Classic in Pittsburgh on December 27th and 28th, facing some combination of Robert Morris, Boston College and Bowling Green. The Big Ten Tournament, involving all six conference teams, will be played in St. Paul from March 20th through 22nd, and league opponents Michigan, Michigan State, Ohio State, Minnesota and Wisconsin will play the Nittany Lions four times each during the regular season, twice at home and twice on the road. Two-game series against Union (home) and Air Force (away) will highlight the out-of-conference slate, along with single games against RIT (home) and Robert Morris (away).

UPDATE 4/26 2:45 P.M.: An email received from the Flyers Friday morning offers further confirmation of the game, and of the fact that the Philadelphia College Hockey Faceoff name and logo will once again be used. 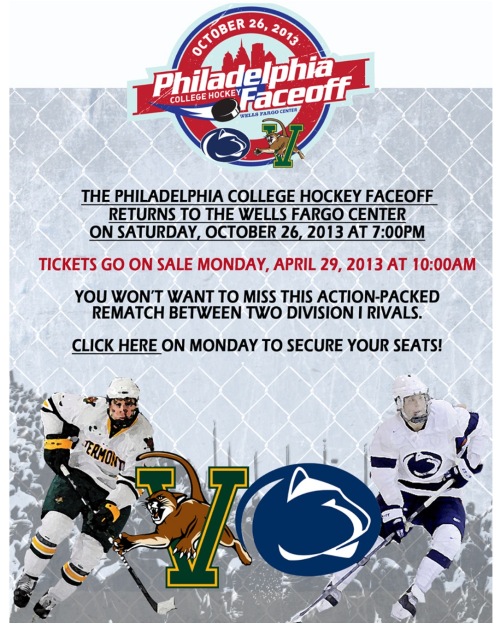