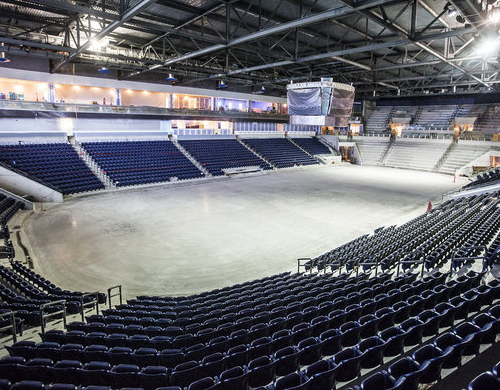 I thought about writing a stand-alone post to mark the first non-hockey event scheduled for Pegula Ice Arena, but...
That said, it's nice to see the arena serve a broader purpose than hockey (cue audio of Joe Battista saying "it will be an asset not just for hockey, but for the entire community," which he says only marginally less often than "steep as code allows" in reference to the PIA's student section). Tickets for the show, called the Musselman's Apple Sauce Family Skating Tribute, go on sale September 3rd. The event is on November 3rd at 5:00 p.m. and will be broadcast on NBC November 24th at 4:00 p.m.

The groundbreaking ceremony for the Terry Pegula-financed HarborCenter complex in Buffalo is old news - it was covered in last week's Three Stars - but James Fink of Buffalo Business First hit a pertinent angle unexplored by others, and his article wasn't on the TYT radar until after the previous post was up, so...


A Penn State alumni [eef... "alumni" is plural... hate that one] and major underwriter of its hockey program — including financing the construction of the Pegula Arena in State College, Pegula said he’d love to see the team play a local college at the HarborCenter’s main 1,800-seat arena or in First Niagara Center in the future.

Canisius has been in negotiations to move into HarborCenter, but hopefully I'm not alone in apathy towards the idea of a Golden Griffins-Nittany Lions matchup in an 1,800-seater. If it's all the same to TPegs, what about Cornell at the First Niagara Center? Less local, sure, but also much more compelling.

Penn State gave a media tour of the Pegula Ice Arena on Saturday morning before football's Blue-White Game, and TYT continued its run as the only PSU hockey-credentialed entity to never once have been invited inside the facility. While I believe I deserve better, I've come to the realization that, for whatever reason, Battista and company are bothered by my existence and that I'll most likely have to adjust to life without access going forward. If that involves traveling to more road games next year, since I've never once had an issue getting a credential from an opponent (provided, of course, that PSU doesn't sabotage my application, as was attempted for the Philadelphia College Hockey Faceoff against Vermont back in January), so be it.

Anyway, as far as I've seen (as of Sunday night), the tour has only produced three puff pieces, and - based on the photos and video that were part of those - there were definitely more than three people present Saturday morning. So it's PSU's loss, I guess. I would have made it four puff pieces, and last I checked, a post to a small audience is better PR than no post to a large one.

I'm giving Greg Pickel of PennLive the "official" link, because his was the most comprehensive story, but be sure to check out the video StateCollege.com's Ben Jones took on the tour, as well as the third write-up, from the Pittsburgh Tribune-Review's Scott Brown. Both Pickel's and Brown's articles have attached photo galleries, and Brown presents an additional item of note:


Battista said he has received season-ticket orders for 3,000 of the 5,000 seats that will be sold to the general public.

Someday, when I'm done being lazy, I'll do a full update on the December post covering the players who transferred away from Penn State after not making the jump from the Icers and Lady Icers to the NCAA men's and women's teams. For now, here's some news on one such player, Pittsburgh-native forward Josh Daley, who is now at NCAA Division III Wisconsin-Stevens Point after spending 2011-2012 with the Icers.

Daley got off to a slow start this year, thanks mostly to irregular appearances in the lineup, but came on strong over the second half of the season. He finished with eight goals and 19 points for a squad that went 15-11-1 overall, a run that culminated with his recently being named Most Improved Player at the Pointers' postseason banquet. Without a doubt, the marketing major will be considered a key part of UWSP's nucleus next year, as the team returns its top five scorers, top two defensemen and starting goaltender.

Cue Maxine Nightingale. We're right back we we started from.
(Deadly Nuts)

Undoubtedly, Gust and Stepan joined the rest of the hockey world in being shocked at Ohio State's firing of head coach Mark Osiecki last Monday. Osiecki, almost universally considered a rising star in the coaching world, seemed to have the perpetually-underachieving Buckeyes finally moving in the right direction, as noted by many over the last week, including Deadly Nuts. Some have speculated that Osiecki was let go so that OSU can hire newly-unemployed former Denver coach George Gwozdecky... but as someone who believes that coaching careers follow a rise-peak-decline curve not unlike the athletes they mentor, I'd honestly rather have Osiecki at this point. In what looks like a boring offseason on tap (compared to the last couple years anyway), the Buckeyes' coaching search will undoubtedly be one major story to watch.

For whatever it may be worth, the change in Columbus means that Guy Gadowsky will not be the newest coach in the Big Ten during the coming season.

Brothers Jesse and Steven Powell, both hockey players at California (PA), were arrested last Tuesday and charged with dealing marijuana out of the hockey house at Cal (if you're not familiar with the term "hockey house," it's pretty much what you think, see above for reference). During a raid, police discovered roughly seven pounds of herb being delivered to the brothers - I believe that falls under the statutory definition of "shitload" - as well as two more pounds and $13,000 already on the premises. A preliminary hearing for the Powells will take place on Thursday.

In what could be viewed as a knee-jerk reaction, and likely because five other players lived with the Powells at the hockey house, the university responded to the arrests by suspending the operations of all three of the Vulcans' hockey teams including, as reported by CBSSports.com, the school's ACHA Division 2 women's team. Cal's women, the first-ever opponent for Penn State's ACHA D2 women back in October, spent much of the 2012-2013 season ranked first in the East Region and qualified for the ACHA National Tournament in Ashburn, VA last month. Similarly, Cal's top men's team, which plays in ACHA D3 and in the College Hockey East conference with the squads at PSU-Altoona and PSU-Behrend, finished the season as the Atlantic Region's number one team and also qualified for its ACHA championship playoffs, held in Springfield, MO March 12th through 16th.

Basically, we're talking about a quality hockey operation, and one that's never been implicated in any wrongdoing until now. Here's hoping that any investigations find that the issue was limited to the Powells - if they are, in fact, guilty of a crime, because this is America and they are innocent until proven otherwise - and that all three teams are reinstated in time for the coming season.

Congratulations to PSU-Brandywine defenseman Joe Naselli, who was named to the ACHA Division 3 All-Atlantic Region Third Team. Naselli, a senior from Media, PA, posted 13 goals and 32 points in 28 games this past season, helping Brandywine to a 19-9-0 record and a berth in the Atlantic Region tournament.

I suppose I would be remiss if I didn't follow up the previous story by mentioning that six different Cal players appear on the All-Atlantic Region teams, including goaltender Zach Stewart, who was also a first-team All-American. Additionally, Vulcans head coach Justin Berger was the Atlantic Region's coach of the year.

If I had it to do all over again, I'd develop an aptitude for video production like Vince Chandler, who was nice enough to share the women's team's highlight video he put together for their postseason banquet.

Last Wednesday, PSU hockey insider Mark Horgas dropped the news that the Pegula Ice Arena will not, as was planned, include a stand-alone Tim Horton's location. A Subway, of all things, will now occupy the space previously set aside for the cyber cafe, although Tim Horton's coffee will still be served at concession stands.

As someone of the opinion that Tim Horton's, while good, is only held in such high esteem by the hockey world because it bears the name of a Hockey Hall of Fame inductee, I'm going to drop a yawn on this development while saying that Dunkin has better food and Starbucks has better coffee. Come at me, bro.

Women's hockey announces its captains for the 2013-14 season; four players will serve in the leadership role
(ritatletics.com)

Forwards Celeste Brown and Lindsay Grigg will be the captains for CHA rival RIT next season, while defenders Melissa Bromley and Morgan Scoyne will don the A for the Tigers. The four take over for a triumvirate of graduating 2012-2013 captains: Kim Schlattman, Ariane Yokoyama and Tenecia Hiller.

Penn State, of course, returns all three of its letter-wearers in captain Taylor Gross and alternates (yes, alternates) Jenna Welch and Lindsay Reihl, so don't expect a similar announcement from the bowels of the Jordan Center anytime soon. 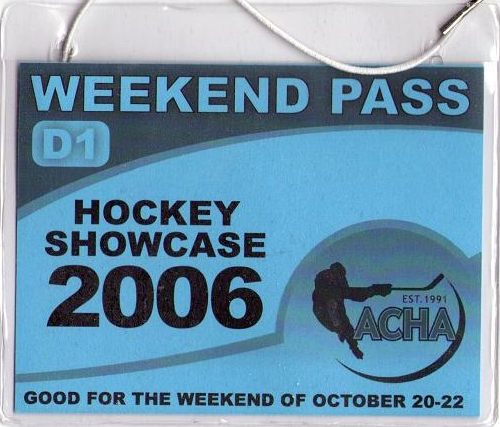 And finally, a last-ditch effort to save the Ice Zone in Boardman, OH - a ridiculous scheme that attempted to sell 1,000 season tickets for the USHL's Youngstown Phantoms through families who use the rink - failed (try to contain your shock long enough to finish this post), and the facility will close for good between May 15th and early June.

The Ice Zone hosted the 2007 ACHA Division 1 National Tournament, which saw the Icers qualify for a record tenth straight championship game, only to be dismantled 5-1 by future ACHA hall-of-famer Will McMahon and Oakland. Earlier that season, the Ice Zone was the site of the 2006 ACHA Showcase, an event that also included Penn State. The Icers' final game of the showcase (following a loss to Oklahoma and a win over Minot State) was against a Weber State team featuring defenseman Aaron Dufford, the great grandson of former Nittany Lions varsity star John Dufford. With the elder Dufford in attendance, PSU topped the Wildcats 5-1.
Posted by Kyle Rossi at 3:24 AM