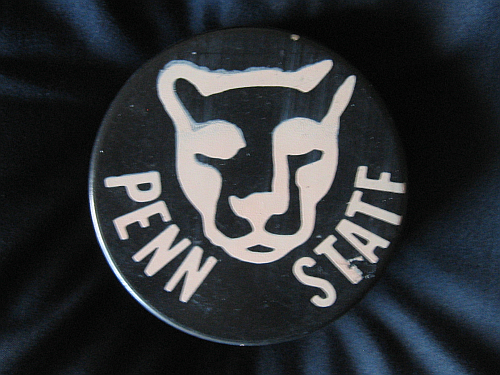 The logo on this puck, for those who don't know, is referred to as the Pozniak Lion, after creator Ray Pozniak. The straight-on depiction of the Nittany Lion Shrine's head was trademarked in 1974 and in short order became a primary Penn State logo. However, on the back of Penn State's 1982 football national championship, a different logo (the more familiar "chipmunk") was commissioned. The Pozniak Lion - and a handful of other well-received insignia from that time - was phased out from that point, although it remains in use by the Lion Ambassadors student alumni corps and those who want to make a few bucks off a pretty sick logo.

Accordingly, and even though the Icers weren't necessarily on the same branding schedule as the rest of the university, it seems fairly obvious that this puck dates to the late 1970s or early 1980s, a fact confirmed by Mark Horgas, the guy who coached the team in 1979-1980 and played just before that.


The 1979-80 version of the Icers featured a veteran team that overcame adversity. They practiced on a temporary outdoor rink and played "home" games as the Cumberland Skatium [in Mechanicsburg] while the current Ice Pavilion was under construction. New coach Mark Horgas had five returning MACHC All-Stars including Rodger Furse, Jamie Hettema, Thom Horgas, Greg Smith and [then] current Icer head coach Joe Battista. The 18-5-0 Icers had a rocky start splitting their first four games with wins at Navy and at home against Drexel and losses versus West Chester and Villanova. Following the home loss to the Wildcats the Icers reeled off six straight victories including a 6-3 win at Villanova. Although they lost the next day 5-3 at Penn the Icers put together an eight game winning streak after than including a 5-3 "home" win against Villanova.

The Icers entered the MACHC Playoffs at [14-5] and were the MACHC regular season champions. They drew West Chester, a team they had defeated twice in the regular season. Jim Pollock played a magnificent game holding the Golden Rams to only one goal while the Lions notched seven of their own including a goal with two assists from Joe Battista. This propelled them into the best-of-three championship series against Villanova.

Playing the first game in Villanova, the Icers also faced a rowdy crowd. Energized by the crowd Penn State dropped the first game of the series 6-3 and perhaps more significantly lost leading scorer Thom Horgas to a knee injury and Dean Petracca to a shoulder injury. On top of this defenseman Joe Battista competed in the championship series with a cast to protect his broken wrist. The Icers regrouped and beat Villanova the following day 4-3 in overtime at "home." The Icers opened the scoring in the first period with a goal by Glenn DeStefano. Matt Glass followed with the second Icer goal and Greg Warren scored the third goal, sending the game into overtime. Led by goalie Jim Pollock's 23 saves and a game winning tally by Joe Grainda the Icers pulled even in the championship series. The season then came down to the third and deciding game of the series also hosted by Penn State. Despite missing their leading scorer the Icers were a determined group as Rodger Furse, Joe Grainda, Greg Warren and Glenn DeStefano scored to lead the Icers to another closely fought victory by a score of 4-3 giving them the championship. This was the second consecutive Hannigan Memorial Cup for the team. Coach Mark Horgas accepted the Cup from former coach Clayton John during the awards ceremony following the game. State College native Jamie Hettema was selected the MVP of the playoff.

Reminder: I didn't write that. Feel free to add the commas and paragraph breaks on your own that ethics prohibit from me.

In an instance of history repeating itself in both directions, the Icers' rivals in the MACHC (other than archnemesis Villanova) were Drexel, West Chester and Delaware in sort of a 30-years-ahead-of-its-time look at the ESCHL. PSU was 9-2-0 against the conference that year to win the regular season title for the fourth consecutive time, including 8-0-0 after December 8th. The non-con was highlighted by that loss to Pennsylvania, which had just dropped their DI program in 1978 and still featured many of their varsity players (incidentally, the man who swung the axe on the UPenn program was Andy Geiger, better known as Ohio State's AD from 1994-2005).

On the other side, there was a reprisal of that century-old tradition of not playing games on campus. The reason for the whole Mechanicsburg situation was the re-purposing of the original Ice Pavilion for an indoor football facility, which caused a two-and-a-half season homeless period while fundraising for and construction of the current Ice Pavilion took place. I don't think that the 2004-2005 program excerpt contained a strong enough expression of the adversity that team faced, so I'll toss in an old Collegian article from March 20, 1980 for good measure to close this post (which includes some prophetic words from Coach Horgas).