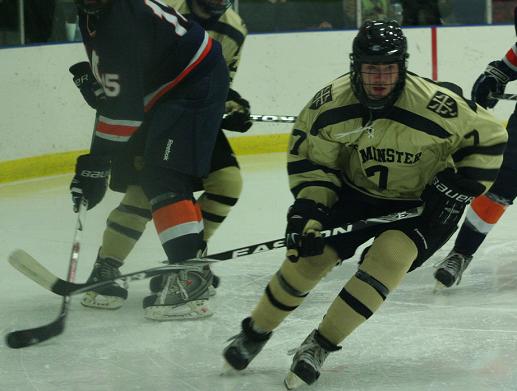 Last season was supposed to be a rebuilding year for Westminster, as their top six scorers departed. However, Joncas retooled around a team-oriented defensive style, and as you can see Acker was one of a group of guys who stepped up his productivity in a big way. The result? Westminster actually improved their record to 22-6-2. That wasn't all.

In December, Westminster won the prestigious Flood-Marr championship, with Acker garnering all-tournament team honors thanks to a four-point weekend. A January slump (5-4-1 during the month) kept the Martlets from the open (overall) New England prep tournament. From the blog Westminster All The Way:


According to [freshman forward] Tristan [Rai] they were far from satisfied. They knew they had a team that could win the entire Elite 8, but did not get it done earlier in the season.

Westminster bounced back though, winning nine of its last ten regular season games. In March, Acker and his teammates finished the surge with the large-school prep championship in the Martin-Earl tourney. In the final against Governor's Academy, Acker contributed a goal and an assist - not to mention a touch of versatility according to Joncas.

"He is a big strong forward who can play either the middle or wing," he said. "He skates very well, using his size to his advantage and has a knack for scoring timely goals."

One other season highlight for Westminster was playing in an outdoor game at East Hartford's Rentschler Field in February as part of the inaugural Whalers Hockey Fest. The Martlets beat Choate Rosemary Hall 3-2 on February 12th, which I suppose makes Acker Penn State's Ty Conklin, should the Citizens Bank Park game take place (Conklin started in the first three NHL regular season outdoor games, the 2003 Heritage Classic as well as the 2008 and 2009 Winter Classics).

Joncas calls Acker a "quiet, confident kid" and says he was a mainstay on both the power play and penalty kill units. "We will miss Timmy a lot not just for his ability on the ice but also for the kind of person he is," he added.

Westminster has already produced one North Carolina native who's done okay at hockey - Ben Smith, now a Chicago Blackhawk, but in 2010 the most outstanding player of the Frozen Four with Boston College. In fact, BC defenseman Tommy Cross made it two former Martlet players on the champs of two years ago (Cross will also serve as the Eagles' captain this year). From last year's Westminster team, blueliner Jake Bolton is bound for Holy Cross in 2012, while goalie Patrick Spano is headed to Yale in 2013.
Posted by Kyle Rossi at 1:02 PM