Most junior teams are right on the cusp of camps and preseason (in fact, by the next Three Stars, Jonathan Milley's Pembroke Lumber Kings will have played an exhibition game), so before we move forward with tracking the progress of recruits who didn't play major junior, here's one more look back at Jessi Hilton - the recruit that wasn't - and his squad.


"We've got a strong goaltender in Pat Terriss and returning players like Jesse Koch and Jessi Hilton, so expectations are high," [head coach Tim Fragle said]. We want to have a good season this year and finish in that top-four position in the North Division to get home ice."

Hilton stepped up as the team's captain approximately halfway through the season, with the departure of former captain Josh Lee, who was traded to the Fort McMurray Oil Barons.

He'll have big stats to live up to this season, having earned 50 points in his 60 games played, managing 28 goals and 22 assists.

Okay, now we can get on to probably the most informative and comprehensive thing written about a PSU recruit to this point - and it's one of our best, Reed Linaker. He's poised to break almost every St. Albert Steel scoring record, provided he stays healthy, which has been an issue in the past. Here's the big Penn State quote from the article.


“It was pretty much talk to me and sell me it. They offered me a scholarship right way so it was kind of hard not to say no,” said Linaker, who will check out the Penn State campus for the first time in early September. “I had some serious talks with Wisconsin, but I figure going to Penn State would be a pretty cool experience. Obviously I can put my own stamp on the program and maybe be the face of the program with some hard work over the next few years. If I work hard, I have the opportunity to be a go-to guy there, so I love that.”

Oh, and there's this: Linaker has a well-regarded, hockey-playing younger brother, Cole. If PSU wants to get serious with the 1995 birth year, they'll have to keep him away from the WHL's Kelowna Rockets, who own his draft rights (6th round, 2010). But maybe the shot at playing a couple years with his brother turns the tide, who knows.

GoPSUSports has come up with literally five men's hockey articles and one video since the aftermath of Guy Gadowsky's hiring. Three of the articles were announcements - the hirings of the three subjects of these videos, and the Scott Balboni resignation. Another was an admonishment concerning NCAA rules.

So it's nice to finally get some fresh content beyond what's absolutely necessary from the official site, even if it's just 9:28 spread over three interviews. Steve Penstone, incidentally, spent 5:45 with Downey alone, scooped the people who hand out the access by nearly two months, and asked questions that demonstrated knowledge of the subject (the best moment of the three videos was the completely serious "what brings you to Penn State" inquiry at the beginning of the Downey interview).

Why Fisher at the top? Why not?

One more recruit-related article, this one on 2013 goalie Eamon McAdam's team. Waterloo's USHL entry just completed an orientation camp, and reading between the lines, it doesn't sound like the goalies did too well. Here's head coach/general manager P.K. O'Handley to explain that one.


"As far as the goalies, I liken the goalie position at this time of the year to maybe a golfer who has had the winter off. Now all of a sudden you are thrown into a competitive environment and you're going to struggle from time to time.

"We're going to score because we have more skill. I wouldn't read too much into all the goals we allowed this week. I'm certainly not. We did not put in any form any kind of team defense. It was fairly wide-open out there.

"Plus, I don't think these guys were ready for [former Black Hawk and UMass Minuteman and current Worcester Shark] James Marcou [who participated in the camp] to be barrelling down on them."

Waterloo figures to carry veterans Jay Williams and Eamon McAdam as its top two goalies this year, but Petersen, the Waterloo native, also will factor in when he arrives back.

The site is launching in the fall, although it's obviously posting articles and it has a pretty active Twitter account (not to mention a pretty flexible definition of "launch"). Semantics aside, I'm intrigued. If it's done right, with a good deal of focus on minor, college and junior hockey, I think it could be a fantastic addition to the internet. 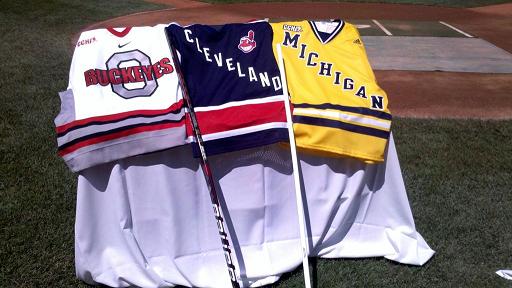 Indians ready for another winter of Snow Days
(indians.com)

Penn State and Neumann continue to work on the proposed game at Citizens Bank Park, but six other schools are set (or at least reportedly set) to play outdoor games at other baseball stadiums. Michigan-Ohio State at Cleveland's Progressive Field is finally official for January 15th. Eight days prior, a doubleheader of New Hampshire-Maine and Vermont-UMass is everything-but-official for Fenway Park.


I could not run the same study on Joe Battista's hockey teams when he was coaching cause they never had any down years, show-off that he was. 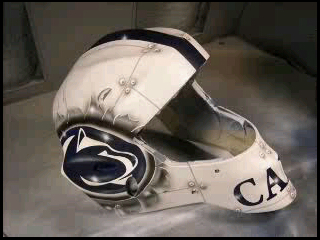 Getting into the Lady Icers' season opener at Robert Morris on September 23rd will cost most people $7. If you're in the Pittsburgh area, or even if you're not, get to it.

Because it's a quiet week, I'll pass around this Josh Hand piece one more time. By the way, the origin of the link is truly one of the best college hockey sites out there. It's specific to non-varsity hockey in the south, but since the Ice Lions are actually in the Southeast Region of ACHA D2...basically, it works out quite well for us.

As a general rule, I only give coaching moves involving the Big Ten or CHA a mention here, but I'm definitely willing to make an exception when an ACHA guy quickly moves up the ladder. Carr was a former player (1999-2003) at Kent State, then moved into coaching with the Golden Flashes as an assistant (2003-2004) and head (2004-2006) coach.

Probably as much as any individual, Carr was responsible for KSU's rise from the waste left over from their failed NCAA program - the Icers beat them 65-5 over the first six meetings after the loss of varsity status in 1994, through the 1998-1999 season - into a respectable ACHA entry with two nationals appearances as a player and one more as a head coach.

Since leaving his alma mater, Carr had been with the Youngstown Phantoms for five seasons, rising from an assistant coach with personnel and development responsibilities to head coach and general manager during the 2010-2011 season. Notably, he helped the Phantoms move from their previous home in the Tier II NAHL to the Tier I USHL in 2009. Now he's an assistant with an on-the-rise Hockey East program that went 25-10-4 and made the NCAA tournament last season. Not a terrible career track.

I routinely take jabs at NoDak, but regardless of the circumstances or your opinion of them, you have to feel for the vast majority of Sioux fans who are obviously passionate and well-intentioned (basically, meaning that they like the nickname but aren't racists). I really don't know how I'd react if "Nittany Lions" was suddenly - or not so suddenly, since this has been going on for a couple years, after all - ripped from PSU.

That said, if the Sioux people were of one mind and approving of the nickname, this is never an issue. Miami somehow survived without "Redskins," and UND will be fine as well.
Posted by Kyle Rossi at 12:21 PM