Breakout Past: A Plea For Hockey

One of my favorite things about reading The Daily Collegian has always been the slap-fights that perpetually take place in the opinion pages across several days, or even weeks, primarily using the letters to the editor. It's a little like reading most message boards, except everything - the vitriol, the ad hominem attacks, the occasionally baseless and always emotional arguments - plays out slowly. It's a perfect setup that aids one in avoiding a tap-out point that inevitably comes within five minutes on a message board, while still allowing one to follow each drama to its conclusion. And as soon as that Marcellus Shale beef plays itself out, the next one, perhaps regarding tuition or State Patty's Day, is right around the corner.

It warmed my heart to learn that this is not a recent phenomenon. It is, in fact, at least 100 years old. Witness the following item in the December 7, 1911 Penn State Collegian, which argues that hockey should be made a varsity sport.

I suppose it becomes slightly dated when it jumps to "we can't beat the big schools in football or baseball, maybe we'll have better luck elsewhere" pretty quickly, but all in all, sound points were made. Hockey's a great sport, a growing college needs an athletic program to match, and hockey brings the unique ability to raise revenue between games through charging others to skate. In fact, it doesn't sound all that much different from an argument one might have made in 2009: hockey's a great sport, a big university should include it in its athletic program, and it could be a revenue producer in part because of the large interest in renting a new facility for different purposes.

Regardless, here comes P. Edwin Thomas with the 1911 version of "you're an idiot" one week later. 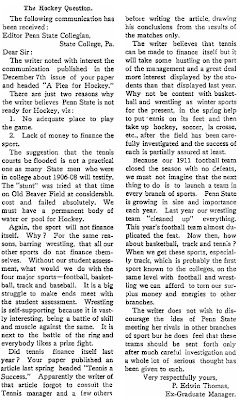 So basically, we should get hockey at about the same time basketball, track and tennis go undefeated like football and pay for themselves like wrestling (which does so of course because it is "vastly interesting," as opposed to hockey, which apparently is not). Still, it too bears similarity to a 2009 argument against hockey, which might have gone along the lines of "let's make basketball not suck before we worry about hockey, and besides, how are you going to pay for all of this?"

Thomas, in the end, was right. There was no adequate place to play the game (he could have just stopped there), and it took until 1981 and the completion of the Ice Pavilion to finally have a stable facility. This exchange of letters represented the last gasp for the earliest push for hockey, highlighted by PSU's first two intercollegiate games in 1909 at Pittsburgh's Duquesne Gardens. Penn State's next intercollegiate game would also be at Duquesne Gardens, but not for another 28 years.
Posted by Kyle Rossi at 2:15 PM