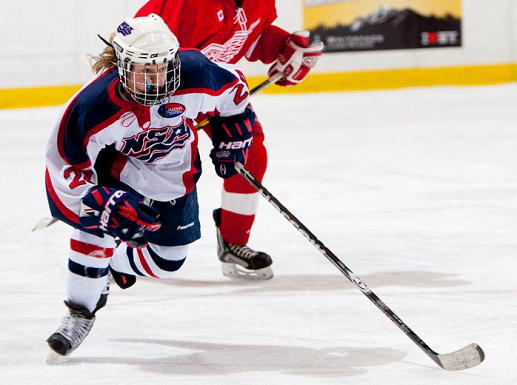 If following men's hockey recruiting is hard, doing the same on the women's side is close to impossible - an ambiguous mash of luck and close attention. Therefore, it's with plenty of excitement and a healthy dose of surprise that I'm able to introduce the first known member of the women's recruiting class of 2012, Emily Laurenzi. Laurenzi popped on to the TYT radar thanks to a Facebook announcement from the National Sports Academy in Lake Placid, NY, her current address.

Last season, NSA, a prep school for winter sports athletes and nicknamed the Mountaineers, finished 12-13-2 and third in the Junior Women's Hockey League's Major Junior East Division. Laurenzi's contributions included her 20 points in JWHL league games (on three goals and 17 assists), good for second on the team behind Beth Hanrahan, who will be playing at Providence this fall. Her 87 points over the full NSA schedule were third behind Hanrahan and Brown-bound Brittany Moorehead.

The Mountaineers and Laurenzi both finished the JWHL season strong - she with ten points over the final six games of the season (including three assists in the finale against the Minnesota Thoroughbreds, the team with a 5-1-0 record in those games. That run carried over into the JWHL playoffs, where NSA upset Balmoral Hall and the Thoroughbreds to make the semifinals before falling to eventual champion North American Hockey Academy.

In addition to the JWHL schedule, Laurenzi and her NSA teammates (obviously, considering the large discrepancy in the number of games) play in their share of tournaments and showcases. One such event is the Tier I U19 New York Girls State Ice Hockey Championships. After a second-place finish in 2009, the Mountaineers dominated their way to the 2010 title (outscoring opponents 40-4 and outshooting them 304-71). Laurenzi was fantastic in the subsequent USA Hockey National Championships, scoring six points in four games. NSA fell back to second place in this year's tournament, missing out on nationals.

Laurenzi comes with her share of honors, including a selection to the 2009 USA Hockey Select 16 Camp, and another one year later to the 2010 USA Hockey Select 17s. She was chosen by the JWHL coaches for the league's all-star game this past season, and was the East Division player of the week for February 11-13. Two years ago Laurenzi won the NSA's Community Service Award for the class of 2012, and she is also an honor student.
Posted by Kyle Rossi at 2:45 AM