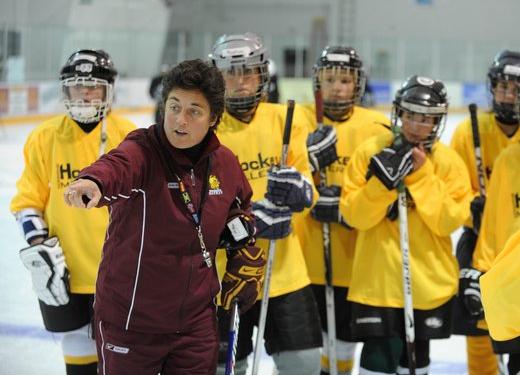 If you don't follow NCAA women's hockey, you probably have no idea who Minnesota-Duluth head coach Shannon Miller is, despite the fact that she's been every bit as successful as her much-better-known rival in Madison and is one of the pre-eminent coaches in the sport. Since I'm pretty much guilty on that count as well, I'll learn along with you.

Right up front, I have to admit that there's not a whole lot tying Miller to Penn State other than an apparently keen interest on our part in everything UMD has to offer - including the arena and the men's coach. And also right up front, I really don't see much incentive for her to leave. She's paid better than Mark Johnson (even post-extension), and she's proven that she can win multiple national championships in Duluth. I suppose there's always the challenge of building something new and the possibility of even more money though.

Through following our pursuit of Scott Sandelin, we know a couple things:
Those two facts lead to two assumptions on my part:
While it's presumed that a guy like Johnson would only leave the Wisconsin women for a men's job, Miller seems to be more attainable for this particular situation. Really, and this goes for all candidates, I think the hire will say a lot about our athletic department's goals for the women's program. Are we gunning to be one of the nation's elite, or is this a matter of "well, we had to do this for Title IX, we're just trying not to lose too much money on the deal?" I hope it's the former, and hiring Miller would obviously be a sign of that being the case.

Miller is a 1985 University of Saskatchewan graduate and was a police officer in Calgary from 1988-1996. Of course, she was also involved in hockey during this time, including founding and coaching the 18U Alberta Women's Hockey team (the first girls minor hockey association in Calgary) in 1989 and continuing with Team Canada both in the Women's World Ice Hockey Championships (1992, 1994) and in the Olympics (1998).

On September 10, 1997, Minnesota-Duluth announced that it was starting a women's hockey program, and on April 20, 1998, Miller was hired as the first coach of the program fresh off of her silver medal at the 1998 Winter Olympics as head coach of Team Canada - not a bad way to start a program.

Here's a shameless copy/paste of UMD's Miller bio (with some minor updates from me since it doesn't include 2010-2011), because it does a good job capturing her Bulldogs career, and the spoils that come with her 313-87-34 career record:


As the only head coach UMD has ever employed, Miller...has led the Bulldogs to [ten] NCAA playoff appearances and four NCAA Championship titles, including three straight (2001, 2002 and 2003). She has led UMD into six NCAA Frozen Four berths, including two NCAA Championships in the past [four] seasons (2010 and 2008).  No other hockey program in the country has won five titles, let alone three consecutive NCAA trophies.

Aside from her record haul of NCAA titles, Miller reached her [300th] career win faster than any other head coach in NCAA Division I history on [Nov. 20, 2010].  As the third winningest coach ever in Division I women's hockey, Miller is just one of two NCAA Division I coaches ever to have collected 200 wins after just eight seasons behind the bench.  Miller is also just the fourth head coach ever to win 250 games while remaining at just one, very lucky,  NCAA Division I program.

That's pretty big time. Here's a link that goes into more detail on some of the highlights of Miller's tenure.

Eleven former Bulldogs have participated in the Olympics, but interestingly, only three played for the United States (Jenny Potter) or Canada (Caroline Ouellette and Haley Irwin). So much like we saw with Mike Sisti, Miller has a demonstrated ability to go where the players are.


One other Olympian, Sweden's Maria Rooth, returned to Duluth this past season as Miller's assistant. She still stands as the program's all-time goals leader, and while the Patty Kazmeier award has never visited the UMD campus, Rooth was a three-time top 10 finalist (2000-2002). Of course, one other international player, Russia's Iya Gavrilova, might be a reason why Penn State won't touch Miller. I'll let the Minnesota Daily explain:


Duluth forward Iya Gavrilova, a freshman from Krasnoyarsk, Russia, is currently under investigation by the NCAA and the school. Gavrilova played on two teams in Moscow, where players have been known to receive payment, food, board and transportation.

That would be a serious violation of NCAA regulations and could result in the Bulldogs forfeiting every game Gavrilova made an appearance in, a total of 19 WCHA wins.

Ultimately, according to Duluth play-by-play man Bruce Ciskie, UMD had to forfeit their 2007-2008 WCHA regular season title and the wins, although they were allowed to keep their 2008 WCHA playoff and NCAA championships.

I'll venture to guess that even if PSU were willing to lay out to get Miller, that would scare them off. A whiff of impropriety, even if Miller was completely without blame in the situation, is surely the last thing the administration wants, right now or ever.

And basically, we're talking about one of the top programs out there, with Wisconsin really the only other school with an argument for the No. 1 spot in women's college hockey history. Just in case that wasn't completely obvious by this point. Like I said at the top, I'm not sure there's much incentive for Miller to leave that situation short of wanting a new challenge and a massive payday (that I'm not sure we'll be offering on the women's side) - but there's no doubt that this hire would set the new program off to an explosive start in the unlikely event that it happens.
Posted by Kyle Rossi at 2:00 PM