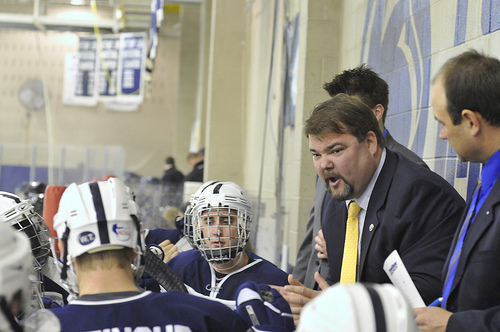 Icers head coach Scott Balboni resigned today, news first reported by long-time friend of Penn State hockey Mark Horgas, bringing an end to the unstable situation at the top of PSU's soon-departing ACHA program that had existed since the hiring of Guy Gadowsky on April 24th.

This, of course, removes any remaining doubt that Gadowsky and assistants Keith Fisher and Matt Lindsay will coach the Icers for the 2011-2012 season, the final year of ACHA competition. Here's the pertinent portion of the press release, which confirms that fact:

Penn State men's ice hockey coach Guy Gadowsky and his staff will coach the Penn State Icers in the 2011-12 season, their final year of American Collegiate Hockey Association (ACHA) competition. Current Icer head coach Scott Balboni has agreed to step down as coach so that Gadowsky and his staff can begin to coach the current team and evaluate the players and 2011 recruits for the future varsity team.

The move accommodates the accelerated time frame for the transition to NCAA Division I status in 2012-13. Coach Gadowsky and assistant coaches Keith Fisher and Matt Lindsay are on campus and have begun preparing to coach the Icers next season. Gadowsky and his staff have the challenge of leading the transition to play in the proposed Big Ten Hockey Conference by 2013-14 in the new Pegula Ice Arena, a full year earlier than originally planned.

"We are very appreciative of all the hard work and efforts that Coach Balboni has put into continuing our tradition of a strong ACHA club program during his 13 years as a member of the Icer staff," said Tim Curley, Penn State Director of Athletics. "We wish Scott and his family all the best and thank them for their contributions to the growth of hockey in Happy Valley."

"I am grateful to Coach Balboni for agreeing to allow my staff and I the opportunity to begin coaching the Penn State Hockey team right away," Gadowsky said. "It will give us the opportunity to evaluate the players and work with the team in preparation for the move to varsity play in 2012-13 and the inaugural Big Ten Conference season in 2013-14. We are excited to build on Penn State's strong ice hockey tradition."

In his five seasons as head coach, Balboni led the Icers to a 150-34-9 record, winning at least 30 games on four occasions. The 2006-07 Icers were ACHA national runners-up and the 2008-09 Icers advanced to the ACHA semifinals.

"The past nine months have been very exciting for Penn State hockey," Balboni stated. "After much thought and consideration about the future direction of the program, I believe it is in the best interest of the overall program to step down now as head coach of the ACHA Div. I Icers team. I can assure you that Coach Gadowsky and his staff are excited and are working to have as seamless a transition as possible and are looking forward to working with current players, recruits, boosters, HMA, support staff and fans both during this final season of ACHA play and leading into varsity play in 2012-13.

"I would like to thank Tim Curley and Penn State for all that they have done over the years to support the Icers and for their continued support to assure that everyone is being treated as fairly as possible in this transition period," Balboni added. "I also want to personally thank all the players, alumni, boosters, HMA, support staff and fans that have made the last five seasons as the head coach so special to me. I am proud to have been associated with Penn State hockey for 13 seasons and I am proud of all we have accomplished together. I plan to remain a fervent supporter of Penn State hockey."

TYT extends its best to Coach Balboni, as well as its gratitude for his years of service to Penn State hockey.