I've waited nearly a whole week since the end of the ACHA meetings, which ran April 28th-May 1st, desperately waiting for some official news. However, as of today, the lead story on the ACHA website still begins with:

2011 Agenda will be posted shortly.

Bravo, ACHA. There are things I'm going to miss about the good old days once we're officially big-timers, you're not one of them.

It would be kind of nice to know some of the rule changes that will affect the Icers' final season, wouldn't it? Fortunately Oklahoma, one of the better-run programs out there, came through with this clutch Facebook note. I think it's one of the ones you have to log in to see, so for the 12 of you not on Facebook, here's what it says.


Attended the ACHA Annual Meeting over this past weekend, held in conjunction with the AHCA Coaches Convention in Naples, Florida - 31 of the 57 D1 teams sent representatives to the meeting

Mercyhurst College donated the most $$$ to the ACHA's Play for the Cure campaign - the amount Mercyhurst raised was not announced; however, Oklahoma raised and donated $1,700 through the annual Scoring in the Fight against Cancer game with the Canadian Air Force contingent at Tinker AFB so we can take from that that Mercyhurst exceeded $1,700 - total amount raised by all 447 ACHA men's and women's teams for Play for the Cure as of the meeting was $20,141.26

At the D1 specific meeting, the number of teams participating in the National Championship Tournament was increased from 16 to 20, with teams 13 through 20 essentially playing play-in games on the first day of the tournament - change is expected to go into effect for this upcoming season

Other D1 notes - D1 eligibility is 4 years and eliminated the extra 5th year allowed if a D2 team moves up to D1 - for teams in leagues with autobids, in order to earn the autobid, ALL teams in the league teams must 1) play 20 D1 games and 10 league games by Nationals bid deadline; 2) submit their game schedule to the Commissioner by Sept 1 to verify compliance with the 20 D1 games/10 league games; and 3) "be compliant and in good standing with the ACHA" - there was discussion but no action taken about possibly eliminating all consolation games at future Nationals - also discussion about World University Games in Slovenia in 2013, using the four officials (2 refs, 2 lines) system in future seasons and Nationals, half shields/visors, future Nationals sites, adding a 5th year of eligibility to D1 to be consistent with D2 and D3

Good times, great sun, incredible sights, lotsa laughs, great to see, talk with and listen to some of the giants in NCAA Hockey - but now that it's over, can't wait to get the upcoming season going.......

From that, it doesn't sound like much in the way of substantial change happened, other than the number of teams at nationals. Half-shields were "discussed," as were some other things, but it doesn't read like any change came of the discussion. The league scheduling/autobid rules don't affect the newly-independent Icers, nor does the elimination of the extra year for moving up in division.

That nationals setup is quite interesting. Adding the four extra teams seems to ensure that sixteen deserving teams get in, something that turned out to pretty much never happen with the sixteen-team arrangement. It's unfortunate that growing the tournament is apparently the solution to the problem (as opposed to, you know, enforcing standards), but we only have to deal with it for one year anyway.

It says that "teams 13 through 20 [are] essentially playing play-in games on the first day of the tournament." So I assume that the tournament now starts on a Friday with the four "play-in games," the winners advance to meet the top four seeds, and the losers get on a bus and go home. The rest of the tournament then proceeds from Saturday as it has since 2005. As dense as the ACHA can be, I don't imagine that a 19th-place game is in the cards.

If I'm getting that all correctly, it seems like a positive change, and if you show up Saturday morning per usual, you'll see better hockey with the Slippery Rocks of the world already blowing town. At the very least, there's waaaay less of a chance of sweating things out as we did last year.

Unfortunately, the Oklahoma update is the only thing I've seen to this point - no more detail than what's here, and nothing at all on the women's side. I suppose if I was a legitimate media person, I would reach out to my vast network at this juncture, but I'm not, so there you go, enjoy.

Finally, here is the attached photo referenced in the Oklahoma post with the All-Americans and award winners for men's Division 1. No Icers were honored, although a few former ESCHL rivals (Alan Dionne and Dan Lassik of Rhode Island and Steve Jones of West Chester) were. Congratulations to all. 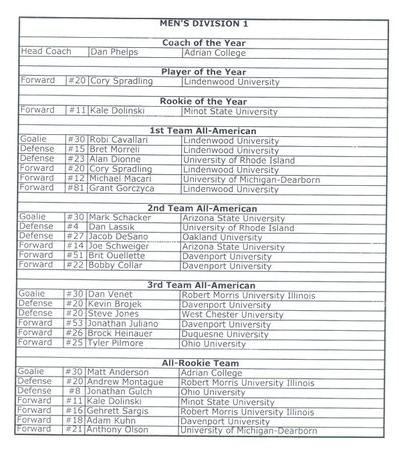