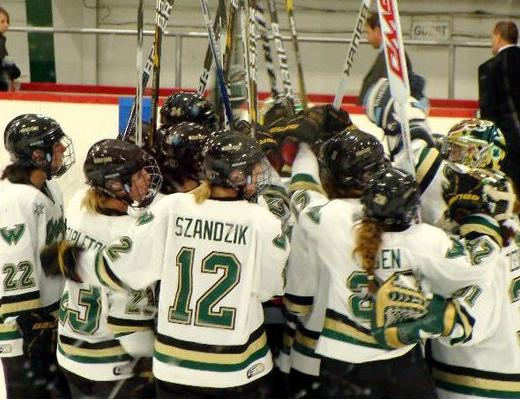 ﻿
Just two days after I dumped on Wayne State a little in my Head Coach Candidate post on coach Jim Fetter, the school has announced that their women's program will now join the WSU men on the scrap heap of defunct college hockey programs (yes, I now feel bad about what I said, in case you're wondering). Here's the press release, which bears an uncanny resemblance to the school's release when dropping the men's team:


Wayne State University will discontinue sponsorship of the women’s ice hockey program effective immediately. The decision was necessary due to continuing reductions in state appropriations to higher education.

“With all the successes we have enjoyed recently with championships, high academic achievement and graduation rates this action leaves an empty feeling and is a disappointment for our women’s hockey student-athletes, our alumni and the department,” stated WSU Director of Athletics Rob Fournier. “This last resort consequence only underscores the economic reality that confronts higher education in the State of Michigan today. In the end, the cost and expenditures of our most expensive operating program determined this difficult decision. Importantly however, the educational objectives of our women’s hockey student-athletes will be protected.”

All current student-athlete scholarships will be honored provided they meet satisfactory progress standards under NCAA guidelines. Releases will be offered to those who wish to transfer to other schools this summer, where they will be eligible to participate immediately as the normal residency requirements of the NCAA are waived.

WSU had 26 All-CHA recipients (10 First Team and 16 Second Team), plus another nine student-athletes who were voted to the CHA All-Rookie Team. There was one All-American and one CoSIDA Academic All-American in the last 12 years. In addition, there were 81 CHA All-Academic team selections from 2002-03 through 2009-10. The CHA did not recognize All-Academic honorees this past year.

Of the current sixteen (16) sport programs, women’s hockey is the most expensive and has the largest operating budget.

The team, to their credit, isn't taking this lying down and has started a Facebook group in an attempt to fight the decision.

This news certainly affects Penn State, as it was widely assumed that the women's program would join Wayne State and the schools listed above in College Hockey America. But without the Warriors, CHA is down to five schools, even with PSU on board - one shy of the six needed for an autobid. Can you imagine joining a conference with no autobid? Me neither. This is something that could potentially push PSU elsewhere, like Hockey East or the ECAC.

Problem is, the ECAC is locked in at a nice, even 12 teams - the same 12 that are in the men's side of the conference. It doesn't seem likely that they'd be willing to break that structure, even for a Penn State. Hockey East has UConn as a women's-only member (the Huskies men play in Atlantic Hockey), but they're at an even eight teams. And from PSU's perspective, those two conferences would require increased spending in terms of travel and just about everything else, and it's not yet certain how much will be spent towards having a competitive women's program.


Before you start worrying about the Penn State women being banished to an Alabama-Huntsville-like purgatory though, remember that a potential savior resides in the west - St. Charles, MO to be specific. Yep, I'm talking about Lindenwood, who recently announced that they were elevating to NCAA Division I in women's hockey as well. While LU will be an independent in 2011-2012, there's certainly a good possibility of the Lady Icers' frequent nemesis joining up with CHA after that to fill the hole left by Wayne State, which puts the idea of PSU being a sixth CHA team back in play.

Here's hoping, because it could be a mess otherwise.

A poster on USCHO raised an interesting idea as well, in the event that Penn State were to hire Fetter.


Purely speculating, but it will be interesting to see if Coach Fetter ends up at Penn State....along with a bevy of his players. Instant team for the Nittany Lions.

While scoring the remnants of an 8-21-2 team might not explode headlines, like I said in my previous post, I think Fetter's a quality coach in a bad situation (this news certainly proves half of that statement right). And some NCAA-level upperclass transfers, even from a bad team, would certainly ease the transition. It's definitely something to keep an eye on as our coaching search reaches its conclusion.
Posted by Kyle Rossi at 9:53 AM