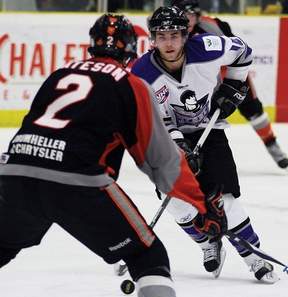 Another trio of gems from Andrew Dzurita gets three-star recognition this week. Maybe the most encouraging thing about this recruiting class is the way each seems like a "Penn State type of guy." Thanks to these piece, we now know Venoit, Russo and Linaker fit as well.

These are highlights from Maine's juggernauty 1992-1993 season, running an hour total, conveniently divided into ten parts and put on YouTube. Why this? Well, 42-1-2 and a national championship was year 16 of the program's existence for one thing - and prior to 1993, the Black Bears had already been to six consecutive NCAA tournaments, including three Frozen Fours. Someone explain to me why Penn State can't equal or better that timeline. Oh, and it's narrated by Gary Thorne, so there's that.

Of course, a dozen years later, a guy by the name of Joe Wunderler had a chat with Chris Hansen and ruined everything. I could do without that part.

I don't mean to be redundant with a second Linaker article, but I chose this one mainly for these passages:


"Coming back and playing with the scholarship makes it that much easier,” said Linaker Wednesday morning. “I know where I’m going next year, so I can come in and work hard, but have fun at the same time. That’s huge from my aspect."

“For [Penn State] to step up and offer me something was pretty huge,” he said.

Sounds to me like we may have the first scholarship player in Penn State hockey history. I can't say I know if anyone was offered one prior to now, but I do know that all recruits except Linaker are paying for at least one year of college, since everyone else committed to this point is coming in this year.

Linaker will play this season with the AJHL's St. Albert Steel.

There's part of me that feels a little guilty about stealing a high-end coach like Guy Gadowsky from Princeton. So it's nice to see them fill their unexpected and kind of late opening with the long-time St. Lawrence assistant, who's highly respected in the coaching community. In fact, some of that respect comes from Gadowsky:


"I am thrilled to hear of the hiring of Bob at Princeton," Gadowsky said. "He's a great all-around guy and he is a man of a lot of substance. I have really enjoyed watching his teams compete and play over the past seven seasons. They play an exciting brand of hockey, which will fit in perfectly with what Princeton fans and alumni have come to expect in the past few years."

And of course, this part isn't new information, but it's still fun to read:

"The Princeton hockey program is in a terrific state," Prier said. "As a coach in the league, I have witnessed first hand the quality of player on the Princeton roster. They work hard and are fun to watch. Guy Gadowsky and his staff have done a fabulous job building the program. I appreciate it very much and look forward to continued success."

Prier returns with prior experience
(The Princeton Packet)

Want to hear even more nice things about Gadowsky? I can do that.


Bob Prier knows the kind of person he is following as head coach of the Princeton University men’s ice hockey program.

"I had the opportunity to go into the office today and I was looking around the office," Prier said at his introductory press conference on Tuesday. “I opened up a cabinet with a white board behind it and Guy (Gadowsky) had left me a wonderful note of congratulations and under that note on the white board there were a few ties.

"That is the kind of guy he is, thinking of other individuals. I’m actually wearing one of the ties he left me. There was a watch there as well and I’m hoping he meant to leave it and didn’t just forget it."

Michigan averaged 6,673 fans last season in a barn that seats 6,637, so don't ask me how the "higher ticket sales" thing works unless they're jacking up prices. Still, it's nice to see one of the three loaded-with-tradition Big Tenners (sorry Sparty, you miss the cut there) express something resembling excitement about the conference. It sure ain't coming from Minnesota.


Johnson says there was no job offer
(Wisconsin State Journal)

So of Mark Johnson and Barry Alvarez, one's a first-rate coach and a better human being, and the other is a big, fat liar. I'll let you decide which is which.

Speaking of clearing up the craziness of Easter weekend...


Sandelin also said he was not offered the job. It was reported, elsewhere, that he withdrew his name from consideration. He did not. He was called by Battista on April 24, with Battista saying Sandelin was not Penn State’s choice.

There's only one problem with that. "Reported elsewhere" wasn't exactly me or some other blog cracking an egg of speculation - it was straight from Joe Battista's mouth:


The search committee debated for close to 16 hours on Saturday, according to Battista, who said one finalist, Scott Sandelin, took his name out of the running and return to Minnesota-Duluth, where he just won the national championship.

I'm going to have to back Battista on this one. Quite simply, he has less reason to lie about it. In fact, I'm surprised he'd admit to it at all, because one would think he'd want all of us to "know" that Gadowsky was picked over two well-qualified candidates who wanted the job.

Sandelin, on the other hand, is still negotiating an extension at UMD. And it seems to me that admitting he backed out costs him a ton of leverage in those negotiations. Where's the incentive from Bulldogs AD Bob Nielson to give Sandelin what he wants if he's not even willing to walk for the best opening in the country this year? If he's not leaving for Penn State, where would he go? North Dakota? Good luck waiting around for that job.

I can't honestly say I care though. Regardless of who was offered (or not), regardless of who backed out (or not), the road led to the best candidate, in my opinion. So I'm declaring this the end of me talking about it.

This article starts with:


Since there’s not much to discuss along the lines of Penn State football this week, we’re going to talk some hockey.

Awesome, let's do that. Please continue.


There’s a buzz in Happy Valley with Division I-A hockey coming to town. In today’s edition of Morelli OnLion, we’ll explore the possibility of something very exciting.


The time is right to play the Winter Classic at Beaver Stadium.

It's not that I don't want to see a Winter Classic in Beaver Stadium (who doesn't?), it's that a) I'm sick of that being the only "Penn State hockey" topic mainstream writers are capable of discussing and b) He tricked me. Not cool.

Anyway, although a signed contract and an official announcement are still pending, Nick Seravalli's brother is reporting that Flyers-Rangers at Philly's Citizen's Bank Park is a essentially a done deal, so don't get your hopes up.
Posted by Kyle Rossi at 9:58 AM