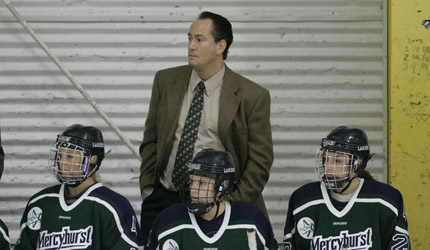 Since the hiring of Guy Gadowsky on the men's side, I had every intention of devoting most of my attention to the still-open women's job. But quite simply, I haven't seen dirt kicked around for the opening on nearly the same level as with the men. And to be brutally honest, I don't know the women's scene well enough to make educated guesses (it's a work in progress), as I did with a few of the men's Head Coach Candidate posts. So what I'm attempting to do now: drop the three to five of these that I might be able to squeeze out over the next couple weeks, then scramble to put together something on the man or woman who gets the job, which hopefully won't happen until after I'm done.

Mercyhurst coach Mike Sisti qualifies as the most-rumored candidate by virtue of being mentioned by two different people in message board posts (here and here). Granted, that's not exactly much to go on. But we do also know that Joe Battista and crew were at the women's Frozen Four this year, which Mercyhurst hosted. Said Battista:


That weekend I attended the NCAA Women's Frozen Four Hockey Championship in Erie, hosted by Mercyhurst College. I visited with an old hockey friend, Mercyhurst Women’s Coach Mike Sisti, who worked hockey camps for me years ago.

So Sisti and Battista are friendly and have worked together. The last time Battista was that open about speaking with a coach at a Frozen Four, it was Scott Sandelin. I've gone with worse than that.

There is some shared history with Sisti and the PSU men's program as opponents as well. As a player at Canisius (then an NCAA Division III team) from 1986-1990, Sisti went 2-0-0 against the Icers, including a 6-2 win at the Geneseo Invitational on November 4, 1988, against Battista's second team as Penn State's coach. Sisti had a great career for the Golden Griffins, putting up 163 points in 120 games, good enough to be inducted into the Canisius Hall of Fame in 2002.

A four-year letter winner in ice hockey, Sisti ranks fourth at Canisius in career scoring (163 points), third in career goals (74), and sixth in career assists (89). He shares the school record for single-game goals with four and holds the mark for single-season hat tricks with six...Sisti posted 13 goals and 19 assists to help the Griffs to a 21-11-0 record in 1986-87. He led Canisius in goals (33) and points (57) in 1988-89 and was named the team’s top forward.

With a resume like that, he undoubtedly had little problem getting a job behind the bench as a part-time assistant with his alma mater from 1990-1993. Canisius improved its record each season during that time, culminating in 1992-1993's 18-11-1 and ECAC West championship game appearance. Also included: another win against the Icers.

After studying the situation and the state of women’s collegiate hockey, Sisti decided it was an offer too good to pass up.

“It was an awesome opportunity to be a head coach and not have to move,” Sisti said. “I love it. It turned out to be a great decision.”

It was a great decision for Mercyhurst, too. Sisti’s teams have averaged 25 wins a season for the [then] 10 years of women’s hockey, own a 74-3 record in College Hockey America and have been ranked in the top 10 in the coaches’ polls the last eight seasons. That success and ambitious scheduling has allowed little Mercyhurst to compete with big-time schools such as Wisconsin and Minnesota and prestigious institutions such as Brown, Colgate, Harvard and Syracuse.

Before I continue talking about Sisti's run coaching the Mercyhurst women, I think it's important to underscore all of it with what Mercyhurst College is: a Catholic school of about 4,400 students. In athletics, they're a Division II school (other than in men's and women's hockey), and basically anonymous outside of their immediate region. Yet Sisti has their women's hockey program rubbing shoulders with giants like Wisconsin, Minnesota and Minnesota-Duluth. That's noteworthy.

During the first three seasons of the Lakers' program, Mercyhurst played in the Great Lakes Women's Hockey Association. They got up to speed quickly, winning the 2001 and 2002 regular season championships, as well as the 2002 playoff championship. When College Hockey America formed for 2002-2003, Mercyhurst jumped at the chance to be a charter member and they remains in CHA today, along with Niagara, Robert Morris, Syracuse and Wayne State (there's also a lot of talk that this will ultimately be Penn State's conference).

Constructing a CHA championship history is actually quite easy: write in Mercyhurst for every single regular season and conference tournament title in history, including this past season. Done. In the last seven of those seasons, the Lakers have also received a bid to the NCAA tournament, which should be considered a separate achievement, as the CHA does not receive an NCAA autobid due to only having five teams. While a championship has been elusive to this point (2009's title game loss to Wisconsin is the closest Mercyhurst has come), the Lakers are far from your typical overmatched small-conference team - other than that championship game, they've only ever lost one NCAA tournament game by more than a goal.

Sisti, for his part, has taken home his share of accolades in all of this. His 311-84-26 record means that he's the fifth-winningest women's Division I coach of all time, seventh across all divisions. He was the 2006-2007 USCHO coach of the year, in addition to taking home 2004-2005 honors from the AHCA.

Star players have also been a big part of the formula at Mercyhurst. Vicki Bendus was the 2010 Patty Kazmaier Award winner, along with a host of other honors. Bailey Bram was also a Patty Kaz nominee. Most notably, of course, is Meghan Agosta, the all-time leading scorer in women's college hockey, and owner of two Olympic gold medals while skating for Team Canada in 2006 and 2010. In the 2010 games, her nine goals and 15 points helped win tournament MVP honors.


Before you think Agosta was a one-woman program, consider that the Lakers made the Frozen Four in 2009-2010 without her, as she took the year off from school to train with the Olympic team. This is a program that runs surprisingly deep for a small school.

Players like Canadians Bendus, Bram and Agosta also highlight one particularly impressive thing about Sisti: his ability to recruit internationally. This past season, Mercyhurst's roster included just nine Americans and 14 from north of the border. Sweden, which has given Sisti players like former defender Johanna Malmstrom, has been another recruiting base in the past. While on the surface that seems to contradict the "Pennsylvania's a great hockey state, we can recruit within the region" party line, I think it shows great resourcefulness. He's finding the players to be an elite program wherever he can, with a budget that's undoubtedly significantly smaller than Mark Johnson's.


For 11 consecutive years, the team’s cumulative grade point average has been above a 3.0.

Pep talk? A little unoriginal, but sure.

Sounds like everything's in order for a quality hire, should PSU decide to go in this
direction. So let's jump out of this one with some more inspirational words from Sisti. Enjoy.
Posted by Kyle Rossi at 2:22 PM