According to the Walpole Express website, PSU has commitment number seven for the 2011-2012 season.


Walpole Express’ Matt Venoit, a 6-ft., left-shot forward, has officially committed to play for Penn State University for the 2011-2012 season. In November 2010 the school announced plans to elevate its hockey program to DI varsity status starting with the 2012 campaign.

Venoit has been a mainstay and a constant contributor to the Express front line for the past three seasons. During the ‘09-‘10 season Venoit posted 20 goals and helped lead Walpole to their first-ever AJHL title. This past season Venoit was named a captain and had his best season posting 50 points in 40 regular-season games. He was also named to the AJHL All-Star game and was instrumental in helping the Express sweep through the AJHL, winning the North division, regular season and another President’s Cup title.

“We are very excited Matt has committed to Penn State,” said Coach Mark Kumpel. “With the elevation to DI, the school’s commitment to build the program, and the stellar academic opportunities available at Penn State, we feel this is a good fit for Matt. His hard work throughout the past three years has earned him this tremendous opportunity. Everyone in the Express organization is very proud of Matt and we wish him the best of luck going forward.

There's no arguing with the team success Venoit's experienced in the last couple years with those back-to-back Atlantic League titles. So let's show that its due respect:


Both championships afforded the Express the ability to compete at the USA Hockey Tier III Junior A national championships, and they represented pretty well - at the 2011 version last month, they made the semifinals before falling to the eventual champion Helena Bighorns. Venoit wasn't exactly a passenger for all of this, either. In 2009-2010, his 20 goals were good for third on the team, while this past season, he was second in points.

Venoit had one of his best games of the season on November 6, 2010 when he put up two goals and an assist in a 6-4 win against Creek Lewis' Boston Bulldogs. Lewis, for his part, had a goal and an assist in defeat.

Also, he just became my favorite player. Why? Because prior to his three seasons with the Express, he played with this team, the Hampton Roads Whalers of the Junior B Metropolitan Junior Hockey League. Anyone who borrows the Whalers name, logo and colors is in good with me. 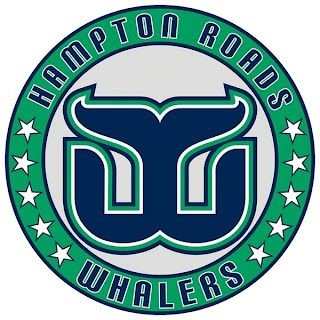