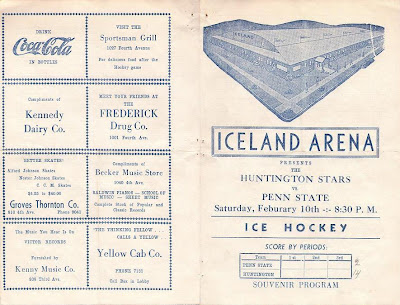 This edition of Payday Memorabilia brings one of the best items I'll ever feature on here - an original program from a game between Penn State and the semi-pro Huntington Stars at the Iceland Arena in West Virginia in 1940.

First, a little on the item itself. It's just a single sheet that measures about 6" x 9" folded, 12" x 9" unfolded and is in better shape than I'll be in when I'm 71. There are three sets of staple holes near the fold, but unfortunately whatever was stapled there at one time has been lost to history (the eBay seller I bought this from had several other Huntington Stars programs like this, all had the staple holes, none had the staples or what was attached to them). Other than that? Not much that isn't already apparent from the pictures. You have a front with the standard depiction of the venue and essential game details, a back with humorously dated ads ($4.25 skates?), and an inside that features the two teams' lineups, some additional biographical stuff about the Huntington players, the basic rules of hockey and some information about Iceland skating sessions.

Let's get a better look at the Penn State lineup:


Here's the Collegian's coverage of the weekend trip, which also included a game against a semi-pro team in Charleston the night before the Huntington tilt. The pre-gamer from the February 9, 1940 issue is on the left, while the only mention of the events of the games, from February 16th, is on the right. The attempt to quickly move on to the Duquesne game isn't really shocking, considering. 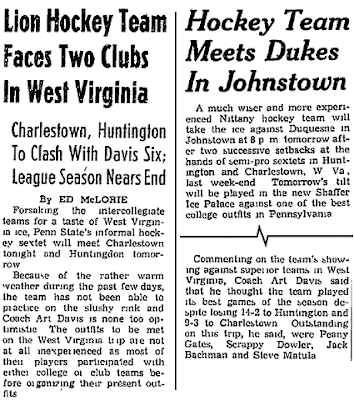 That Huntington Stars team wasn't half bad. As you can see on the program, Pete Donald and Dick Maley both went to Clarkson, where they teamed up on the 1937-1938 team that went 13-1-1, beating Cornell, Dartmouth, Yale and Princeton by a combined 28-5. Harry Wood, Jr. played three seasons at New Hampshire. George Tessier subsequently played in the IHL during the formative years of that league.

However, as it turns out, despite being 12 goals better than the pucksters on that day, the Stars, the Charleston team PSU played the previous day, and indeed even the Stars' home ice have a history just as temporary as our original varsity program.

[In] 1938, a year after West Virginia's first indoor ice rink opened up in Kanawha City, its second opens right down Rt. 60 in Huntington, a swanky little place at the corner of 7th Avenue and 1st Street called Iceland. The first hockey games were played that December, originally with a mix of Charleston and Huntington fellows, but rather quickly a rivalry formed between Huntington's Stars and Charleston's Ice Sports (later Comets). Beyond the Rt. 60 duels - which would grow to include high school squads as well - teams would come to town from Pittsburgh, Detroit, Toledo, Akron, New York, and even Ontario (a town called Petrolia, to be precise), and Huntington proved to be quite competitive.

With incoming teams came incoming attention, as Huntington and Charleston entered discussions with team owners about forming a new league. This league, the Tri-State Hockey League, would officially start in fall 1940; unfortunately, while they were slated to have six teams take the ice in 1941 - Pittsburgh and Johnstown would be stragglers - only Huntington, Charleston, and Akron were ready for the start of play. A team from Toledo was to begin play in early 1941, but these plans were dashed just a week before they were to enter league play.

Despite good crowds at Stars games, the management at Iceland ran into money troubles, and in February 1941 the rink announced it was closing up; under new management, it would be converted into a multi-purpose venue, and the rechristened Arena Gardens would become the home for Marshall basketball in the years afterward. With Charleston's primary foe vanquished permanently, Ice Sports decided to pull the plug on the Comets, who could only draw a crowd when Huntington came to town anyway! With that, the league ended rather inauspiciously.

Arena Gardens would host Marshall College basketball until a fire consumed the building in April 1945.

One of the things that really fascinates me about history is the way things can just come and go, leaving no trace whatsoever except in the memories of those who witnessed it and the occasional scrap of paper. And not just trivialities in a lot of cases. On the Penn State side of things, we had a brand-new hockey program that would retroactively be named varsity. The future was ahead of it. Iceland was the second indoor ice rink in West Virginia, and there was a probably a big to-do when it opened. I'm sure the Huntington and Charleston outfits had big plans for their organizations and league. Within a decade, all of those things were wiped off of the face of the Earth. And if not for this program and the Collegian archives, this game may as well have never happened.
Posted by Kyle Rossi at 8:44 AM