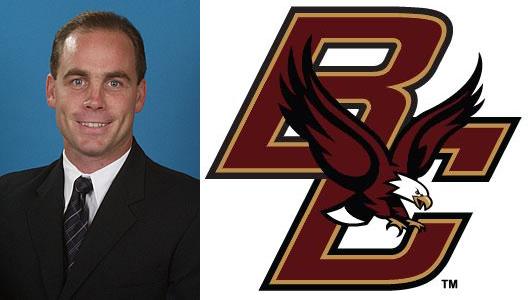 When I first considered doing one of these on Mike Cavanaugh, I hesitated. Why? Quite simply, he's been on Jerry York's staff at Boston College for sixteen years, the last seven of those as associate head coach. In that time. And after a couple seasons of building, BC has become probably the dominant program in college hockey. To sample that, here's some of the track record since 1997-1998:

I could go deeper, but you get the idea. They're pretty freaking good. But there's a question that I couldn't get over: On the back of that track record, how in the hell is Mike Cavanaugh still employed there? Shouldn't some pretty decent program have gratefully handed him the keys about five years ago? I mean, isn't that generally what happens with assistants with much less on their resume than this guy? So what's the deal? Did he get a program on probation at some point? Is he a registered sex offender? Did he at some point say that he and his Irish surname were parked in Boston for all eternity and that only one million billion dollars and a tanker full of chowdah every week could change his mind?

Turns out, it just hasn't happened, for whatever reason. He was one of the finalists for the Ohio State job last off-season that Casey Jones also didn't get. It could just be a matter of him realizing that he doesn't have it completely horribly, combined with the fact that job openings at successful major programs aren't all that common.

I mean, really, is being the head coach at Michigan Tech better than being York's right hand on Chestnut Hill in any way whatsoever, other than the ability to say you're a DI head coach? Job security? Success? Reputation? Even compensation? Not to pick on MTU, they have it tough enough as it is, but I think you can at least argue that being the top assistant at the top program is a superior gig to a head job anywhere in the bottom half of DI.

Speaking of the bottom half of DI and Cavanaugh getting a head coaching job, he's considered a finalist for the open job at Providence, so there's a decent chance he might be completely off the table for PSU, since PC is probably going to make their hire first.


According to sources close to the PC program, Cranston native David Quinn --coach of the AHL's Lake Erie Monsters, and a former associate head coach at his alma mater, Boston University, where he was an all-Hockey East defenseman -- was on campus [Monday] for an interview.

He'll be followed into town, sources say, by Mike Cavanaugh, associate head coach of the Boston College Eagles, and Nate Leaman, the head coach at Union.

Driscoll, who was in Minnesota over the weekend in his role as chairman of the NCAA Ice Hockey Championship Committee, would say only that he hopes to have a new coach in place no later than the middle of next week.

This previous article also mentions that he was in the running at Brown a couple years ago, and there's been some noise about the position at UMass-Lowell too. Not all Friars fans are sold though:


I don't want Cavanaugh. If he's good he's a short timer, if he's nothing without the BC jacket on I don't need to have a shellgame played.

...and those also happen to be the two biggest (only?) anti-Cavanaugh arguments, put much more succinctly than you generally get out of me. For what it's worth, someone in that same message board string provided a nice counterpoint to the second.


Do you realize the pressure of recruiting at BC? Due to the success of their program and the expectations, year after year you have to find the best of the best. The all too involved "Pike's Peak Club" will certainly let you know when they are not impressed. At a place like Union, you can certainly exceed expectations a lot easier than at BC. One could argue that BC did not live up to expectations this year because they didn't make the frozen four, Union makes the tourney and suddenly their coach is Bob Johnson.

For something like the Penn State job, you might have to throw in his willingness to get out of New England as a third potential snag. Even if it kind of seems that way, the North Andover, MA native hasn't been chained to the Bay State for his entire life. But even when he's not there, he's generally not far away.

Cavanaugh played collegiately at NCAA Division III Bowdoin College in Brunswick, ME, where he served as captain in his senior year of 1989-90 and also crossed paths with former Icers goalie coach Darren Hersh. I imagine Cavanaugh did his part to keep Hersh clean against UConn that year in an effort that wound up in the Bowdoin record books.

From there, it was a year overseas as a player/coach with the Richmond Flyers of the now-defunct British Hockey League. Cavanaugh tore it up with 62 goals and 99 points in just 28 games, but the Flyers ceased operations after that 1990-1991 season when their rink was demolished to make room for apartments. Sounds like something that would've happened to some opponent of the 1930s-1940s Penn State men's hockey team.

After that, Cavanaugh came back across the pond and spent 1991-1992 assisting at Belmont Hill School (Belmont, MA), 1992-1993 assisting York at Bowling Green, and 1993-1995 assisting Roger Demment at Dartmouth. There was a whole lot of losing in his life during these years (19-21-1 at Bowling Green, 14-37-3 at Dartmouth). Still, as I've learned putting these posts together, good coaches don't always win. Accordingly, York thought enough of Cavanaugh to bring him over to BC, a relationship that's proven pretty fruitful on both sides.