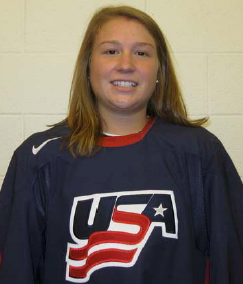 For quite a while now, I've been planning some kind of update post on women's hockey. Last we heard, about a month ago, the head coaching search for the NCAA team is moving along at roughly the same pace as on the men's side, which means we might have some news to report soon. But really, there just hasn't been anything out there, which puts me in the unfortunate position of not having any material, since I'm not exactly in the position of legitimate journalist capable of generating my own stuff at the moment.
This isn't the update I had in mind.
Thanks to Christine Newby in today's Daily Collegian, we've learned that Lady Icers sophomore defender Kate Christoffersen's career has been ended by her fourth concussion, suffered in a win against Liberty back on February 11th.
In this case, I'd be doing a disservice to a well-written article by copy/pasting it and interjecting a couple sentences of my own here and there, so please read Newby's article if you haven't already. It does a fantastic job painting a portrait of a hockey player whose dedication to the game and her team can't be measured, but who also paid a tremendous price for that dedication. It's a heartbreaking situation, but it's nice to see that she'll remain a part of the team:


As for the Lady Icers, coach Mo Stroemel said Christoffersen will still be on the roster next year, even though she can’t play.

“We’re not gonna cut her loose,” Stroemel said. “She’ll be a part of the team still. She will participate in team functions and things like that, and she’ll also help us in terms of helping us manage the team.”

The sophomore defender is looking forward to remaining on the roster.

“The team is everything to me,” Christoffersen said. “Even though I can’t play, I can still be a part of it.”

Christoffersen totaled nine points on three goals and six assists in 45 career games for Penn State. One of those points came in a different defeat of Liberty just over a year before her final game, where she played a vital role in Alicia Lepore's overtime winner. She was selected as an alternate to the inaugural women's World University Games team, which finished fourth in Erzurum, Turkey from January 27th through February 6th.

Meanwhile, the movers and shakers of the ACHA are set to meet in Naples, FL starting April 28th. Among other topics, they're discussing providing less protection to the face and head via the use of half-shields (on the men's side). Yeah, that makes sense.
Posted by Kyle Rossi at 5:24 PM