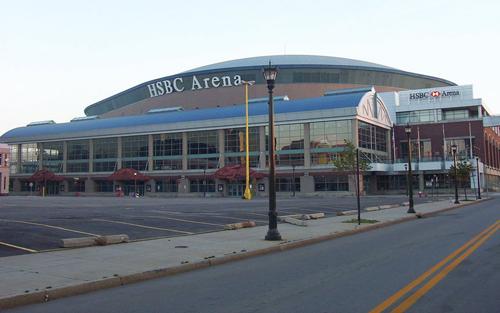 A couple weeks ago, the Icers released a tentative 2011-2012 schedule. One thing that I really like about it is that it brings a couple of frequent Icers opponents from the past - Illinois and West Virginia - back on our final ACHA DI slate. Toss in the customary games with Ohio, Delaware, West Chester and Rhode Island, as well a game in Hersheypark Arena (Penn State hockey and that venue go way back) and you have a pretty nice tour of where we've been just before we get where we're going.

Sure, I would've liked to see Michigan-Dearborn and Eastern Michigan on too, but unfortunately, neither of those programs is really worth our time right now.

However, as I've studied Icers history, one other omission has come to my attention. PSU has quite an extensive history with the City of Buffalo and western New York, thanks largely to the University at Buffalo, Erie College, Buffalo State College and the University of Rochester all being former conference rivals in the International Collegiate Hockey League, Penn State's conference from 1985-1992.  Occasional games against Canisius and St. Bonaventure were also part of the equation in those years.

The 1989 ICHL championship game against Buffalo still stands as one of the great games in Ice Pavilion history. More to the point I'm approaching, the trips to western New York were always gritty battles where the wins were hard-earned. Case in point: even during the Icers' dominating run to the 1991-1992 ICHL regular season title, PSU was only 3-4-0 when away from home against the schools mentioned in the last paragraph.


More recently, it's been Niagara (coached by Larry Brzeczkowski, who also played at Buffalo State during the ICHL years) who's taken up the title of Icers Queen City rival. 2011-2012 will mark the sixth consecutive season the Purple Eagles have been PSU's Friday-only opponent to close the fall semester. Prior to that in 2003, they stepped in for Eastern Michigan, a former every-December opponent, to give the Icers two desperately-needed games on short notice after the EMU hazing scandal hit.

However, every single game with the Purps has taken place at the Ice Pavilion. My proposal here is that we honor PSU's Buffalo tradition in the final ACHA season as well as Niagara's previous accommodation by finally giving them a return trip, on December 16th, 2011, instead of the tentatively scheduled game at Penn State. And while NU's Dwyer Arena is a great facility, I'm looking about 20 miles south of that: at HSBC Arena.

Sure, it's a major league arena, hosting primarily the Buffalo Sabres but also a multitude of other events, meaning we might have to be a little flexible with the exact date and time. Sure it might be expensive to rent it out. But hey, if you haven't heard, we have an $88 million in with a pretty important guy in the arena hierarchy - still another PSU-Buffalo connection. I think all concerned parties can find a way to make it work if need be.

From the Penn State perspective, it could help recruiting in a pretty fertile area - rumor has it that some okay hockey players come from western New York and southern Ontario. And don't we owe a regulation game in an NHL barn to the players still around from that maintenance gongshow in Mellon Arena?

I also happen to think it would be a responsible way to help the ACHA on the way out by boosting the visibility of one of the programs that does things right. NU is a first-rate organization, something not common enough in the ACHA, a fact that was recently reinforced by their university. It would be a thrill for the Purps' large number of WNY natives, not to mention convenient for Mike Broccolo's Rochester-area family.

Plus, I'm a little closer to Buffalo than I am to State College. Hey, who said my motives can't be at least slightly selfish? Independent of that, I still think it's a great idea.
Posted by Kyle Rossi at 1:25 PM