SPIN MOVE! Given what broke on Monday, you thought for sure it was going to be Scott Sandelin this week, didn't you? Well, it kind of is. Based on what I know, this series doesn't have much of a run left. Specifically, this whole thing could be over next week, or at the latest, the week of May 2nd, immediately following the American Hockey Coaches Association's annual convention, which runs from April 28th through May 1st.

With that in mind - not to mention my goal of actually hitting the guy who's ultimately hired without regard to the number of guesses I take at it - we'll cover Gadowsky today, Sandelin Friday, and probably two more next week. In the meantime, let's not forget that Sandelin isn't the only interview taking place, it's just the one that's leaked out so far.

For our purposes, the Edmonton native's story starts in Colorado Springs. He played 134 games in four years for the Colorado College Tigers, where he served as captain and wore my favorite number, 16 (bonus points already, and we've barely started). CC was generally awful in those years, but still, he managed to parlay that into five seasons of bouncing around the minor leagues, from the IHL to the ECHL to the AHL, and even to Germany. Let's stat it up: 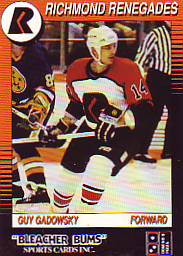 What those stats don't say: Gadowsky had a pretty good idea where he wanted to end up in life, even while he was still making his living on the ice. He learned the ropes of the trade as an assistant playing coach both with Richmond in 1992-1993 and later with Fresno in 1995-1996.

That 1995-1996 season was pretty impressive for Gadowsky even beyond his stat line. He won the WCHL's MVP award as well and helped lead the Falcons to the finals in the inaugural season of the now-defunct league. So, at the very least, we know he can multi-task.

He decided to step aside as a player following that career year and get into coaching full time, this time as the Falcons' head coach, a position he held for three seasons, going 126-80-12. The team made the WCHL playoffs each season and Gadowsky won coach-of-the-year honors in 1996-1997 (a recurring theme, as you'll see).

It isn't often that I have a reason to talk about what coaches do in the offseason - recruiting, camps, etc. - but Gadowsky's a little bit of an exception, as he spent the summers of 1996-1999 coaching in Roller Hockey International - first with the Oklahoma Coyotes in 1996, then with his former team, the San Jose Rhinos, from 1997-1999. He collected an RHI coach-of-the-year award in 1997 as the Rhinos won the Western Conference title.

When I do these posts, I always like to see a diverse background with success in different types of settings. It's my belief that every coaching situation is unique (ours for obvious reasons), so the ability to adapt, to me, indicates a better chance of a guy turning out to be a quality hire. And a successful stint coaching RHI certainly qualifies as "diverse," particularly from a coaching standpoint.

From here it gets a little more conventional, in the form of a nice run coaching the Alaska Nanooks of the CCHA from 1999-2004. While the overall record of 68-87-22 doesn't sound too impressive, let's get some context on that mark. Alaska wasn't exactly happy to see him go.


Gadowsky is credited with taking a program that had endured five consecutive losing seasons before his arrival in 1999 and turning it into a team that earned home ice for the Central Collegiate Hockey Association playoffs in two of the last three seasons.

Average attendance at the Carlson Center jumped from 2,962 per game the season before Gadowsky arrived to 4,055 last season.

Basically, he took a bad program and made them respectable. And he one-upped that accomplishment at Princeton, where he's been since 2004.


The Tigers were simply pathetic immediately before Gadowsky's arrival, winning a combined eight games over two seasons. He matched that total in year one, then bettered it each year from years two through five. The culmination of this progression was 21-14-0 in 2007-2008 and 22-12-1 in 2008-2009. That 2007-2008 season earned Princeton its first NCAA tournament bid since 1998 (via winning the ECAC tournament), scored Gadowsky ECAC coach-of-the-year honors as well as national honors from some corners.

That next year brought Princeton's best record since some guy named Lloyd Neidlinger coached the team to a 15-4-0 mark, which happened during Franklin Delano Roosevelt's first term. Seriously. Another NCAA bid came from that, but the Tigers lost in the first round (coincidentally to Sandelin's Minnesota-Duluth) in pretty unbelievable fashion.

A predictable step back came in 2009-2010, but Gadowsky's crew was back on the winning side of the ledger this past season at 17-13-2, and with a fairly young team (16 freshmen and sophomores), they should be well-positioned to climb back towards the NCAA tournament in the next couple years.
﻿
﻿While I've touched on academics in a lot of these pieces, Gadowski takes it to another level. Just from his Princeton bio, we get the following:
That last bullet point inspired me to pull up some grad rate data, so let's add the following:

So he wins while emphasizing academics. Sounds like a Penn State kind of guy to me. Recently, there's been a decent amount of buzz around Gadowsky as it relates to the PSU opening. That's probably a good sign for him this far into the process, and I personally believe him to be one of the final-stage candidates. Here's a quote from the article I just linked:

Princeton coach Guy Gadowsky is a name that comes up a lot. He is on the Division I Men's Ice Hockey Committee, and so I saw him a lot at the Frozen Four. Without getting into specifics about himself, personally, which he wouldn't want to publicly divulge anyway, Gadowsky said that the Penn State opening is far more attractive to coaches than say Massachusetts-Lowell. This is no offense to Lowell, it's just that the prospect of starting your own program from scratch is appealing to coaches.

"I'm not saying I'm interested per se, but I could see why a lot of people are." Got it, coach. <winky face>

One theme that seems to be emerging during this process: the idea of the candidate list being divided into two groups, "Joe Battista guys" and "Terry Pegula guys." That's not at all to suggest that the two most important people in Penn State hockey are at odds with each other or that bad coaches are being involved in the process. It simply means that there are essentially two possible explanations for a guy having made it to this stage of the hiring process.

I'll get a little more into that distinction Friday with Sandelin (look at the assistant coaches he might bring with him, the NHL team(s) they played for and the amount of money it would take to pry Sandelin from a national championship program if you want a hint), but for now, suffice it to say that Gadowsky is a Battista guy. We've gone over the academics, always a big selling point with JoeBa. He's also worked Penn State hockey camps, not something that tends to happen if you don't get along with the people running a program.

Let's step out of this one with a Gadowsky endorsement from a guy whose opinion I respect, CBS Sports' Dave Starman:


HC gigs at PSU, Mich Tech, Providence and Lowell all were/are open....can someone tell me how Guy Gadowsky's name isn't #1/#2 on every list?