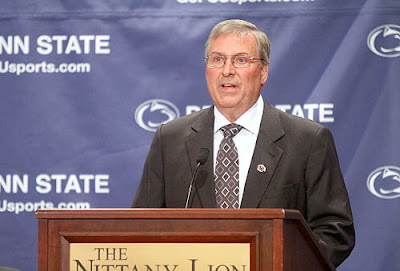 "He who has the gold makes the rules."

And of course, the man with the gold, as related to Penn State hockey, is Terry Pegula.

About a month ago, Matt Walfrand from TakeoverTheGame.com asked me the following question:


"All Buffalo Sabres fans are dying to know, is [Pegula] a hands-on guy or does he stay in the shadows?"

You can read how I answered it at the link - essentially, I said that he's involved yet not overbearing - but upon reflection, I probably didn't think that one through enough. So let's make up for that now.

The guy gave $88 million. Maybe the impact of that number has diminished in the last few months, so I'll re-state it - it's about 30 times what I'll make over my entire career as a plug who sits at a computer and generates sales reports.

I do have an opinion about donations, that being that they're, well, donations. My wife and I donate to things. We don't expect anything in return - if you want to send a calendar and give us priority on tickets, we won't complain, but you don't have to do those things, we donate because we want to help something meaningful to us. Terry Pegula did not "buy" Penn State hockey like he bought the Sabres, he gave it a gift. Sure, on his level, he gets his name on an ice arena (not to mention this blog) instead of a calendar (although I'm sure he can get a calendar too if he wants one), but it's still a gift.
﻿

However, that's the attitude of someone who's never given $88 million to Nittany Lion Club or anything else. Given that tremendous sum of money, who really expects him to say, "oh yeah, you guys go ahead and do what you have to do, just let me sign off on the decision and CC me on all the e-mails?"

For all I know, maybe he did. He did just buy the Sabres and essentially say "keep up the great work, Darcy Regier and Lindy Ruff." My initial reaction to that was something along the lines of being amazed at his deference to his hockey operations people. But then again, there are other explanations. For all we know, he plans to clean house this summer and realized that making sweeping changes during a playoff push was a risky move. Even if you don't have legitimate Stanley Cup aspirations, those extra home dates in the playoffs are always helpful to small-market teams. Or maybe he carefully evaluated the two prior to taking over and decided they were keepers - after all, both deference and heavy involvement could have led to the end result of retaining Ruff and Regier.

Realistically, it's probably too early to say exactly how Pegula involves himself in hockey ops. We simply don't have enough information yet. Walfrand approached me as a Pegula "expert," but at the same time, I've only "known" Pegula for a couple months longer than him. I'd never even heard of the guy before last August, which I imagine is probably the norm, unless you subscribe to Gas Barons Digest or something.

Now swing things back to Penn State for a second. The status quo, what they have in Buffalo, is always the safe call. But there is no status quo at Penn State, not even a previous coach who inspires the decision-makers to say "we need the opposite of that guy." It's just a job opening and a bunch of rumored candidates. We have a decent idea who some of those might be, but we don't know all of them. And more to the point, we don't know who made them candidates and why.
﻿
﻿
So is he a hands-on guy or does he stay in the shadows? We might be about to find out.
Posted by Kyle Rossi at 7:27 PM