Breakout Past: Who Wants to Marry an Icer? 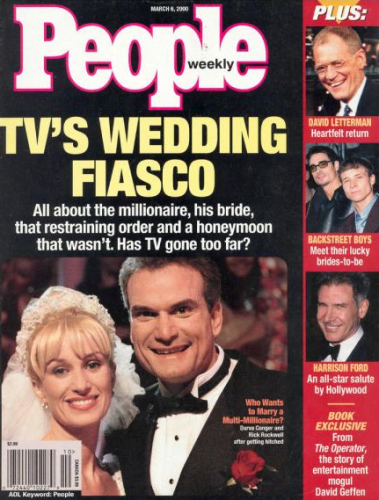 On February 15, 2000, over two hours in Las Vegas and in front of 22 million viewers on Fox, Californian Darva Conger won a beauty pageant-style competition against representatives from the other 49 states for the right to marry Rick Rockwell. Rockwell, then 42 years old, was vaguely hyped by the network as a very wealthy man, although little was known about his background or what, exactly, made him wealthy. The victorious Conger also received $100,000 in prizes, including a $35,000 engagement ring.

The television special, called "Who Wants to Marry a Multi-Millionaire?" and immediate viewership success aside, was almost universally panned. One side of the political spectrum mourned for family values, while the other fixated on the show's exploitation of women. Just about everyone expressed concern for the direction of society in some form or another.


The show was an equal-opportunity offender: Everyone from the left-leaning National Organization for Women to L. Brent Bozell's right-wing Media Research Center was disgusted. "It took something like this to make the Miss America Pageant look good to me," says NOW president Patricia Ireland.

"Multi-Millionaire's" legacy today is crystallized in "worst ever" lists. In 2010, Entertainment Weekly named it the fourth-worst reality show ever and TV Guide has called it the 25th-worst show of all time.

The marriage between Rockwell and Conger, predictably, was annulled less than two months later and not very amicably. Conger, in particular, hit the talk show circuit after the fact to make clear to as many people as possible that the program was contrary to her morals, that she never had sex with Rockwell and that the entire thing was more or less a completely horrible experience for her. Shortly after, she posed for Playboy and beat up Olympic gymnast Olga Korbut on Celebrity Boxing (1, 2, 3), the latter payday giving Conger the rare distinction of appearing on two different shows from the TV Guide list. Today, Conger is back in relative obscurity, save for the occasional "where are they now?" article, as a Northern California nurse.

Rockwell did not escape the sometimes punishing glare of the spotlight unscathed. The most damaging item that came from the inevitable prying into his background was the discovery of a restraining order filed in 1991 by Debbie Goyne, a former fiancee of Rockwell's, who alleged abuse (the restraining order becoming public torpedoed re-airings of the show, along with planned follow-ups and spin-offs).

His finances were also called into question. Rockwell, in the 20 years prior to "Who Wants to Marry a Multi-Millionaire?," worked as a stand-up comic notable for outlandish attempts at publicity, a motivational speaker and a movie writer and actor who dabbled in real estate. People who are very successful at those things are generally multi-millionaires, but Rockwell's high points in Hollywood were a significant-but-only-for-our-purposes (and uncredited) turn as Steve Christoff in the 1981 TV movie Miracle on Ice and works of art like this: 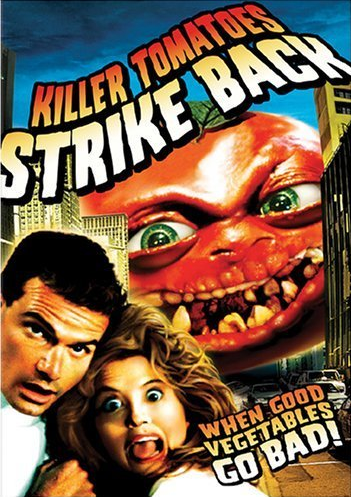 The public was generally satisfied by Fox's claim in response to the criticism that Rockwell had a net worth of just over $2 million (with $750,000 of it liquid), barely meeting the "multi-millionaire" threshold, but still well short of the hype leading up to the show. Over the last 13 years, he's more or less dropped out of showbusiness and has worked as a flight instructor in San Diego. In perhaps the ultimate display of just how fleeting those 15 minutes can be, he has just 42 followers on his Twitter account.

One detail about Rockwell's background that remained relatively unknown throughout the episode: he played for the Icers.

Rockwell, whose birth name was Richard Balkey, is a Pittsburgh native and a Fox Chapel Area High School alumnus who graduated from Penn State with a health and fitness degree in 1979.


Even then, Mark Horgas, who played ice hockey with him [at PSU], noticed his former teammate's desire for the spotlight. Like the time the team was at a hotel near Philadelphia and Rockwell went onto the empty stage in the lounge to regale guests with his comedy.

"He had this joke routine pretending to be Jackie Stewart, who was this race car driver, and this safecracker routine, you know, making a noise like the dial spinning. That was just Rick," Horgas said.﻿﻿

Balkey gave other indications of his future while an undergrad. As a Sigma Pi brother in 1978, he won the fraternity division of the Phi Psi 500 (a former PSU tradition popular during the 1970s and 1980s that involved people racing to drink in several bars, often in crazy costumes, and raising money for various charities - here's some video taken from 1982's version). The previous year, he put on a hideous bikini to help Sigma Pi win first place in a 1930s bathing beauty contest generating more than $500 for Sight Conservation and Aid to the Blind.

His two-year career (1976-1978) as a checking left wing for the Icers was really only notable due to events 20-plus years after the fact, but a couple of highlights occurring one week apart are worth mentioning. He scored the eventual game-winning goal in a 4-2 Mid-Atlantic Collegiate Hockey Conference semifinal victory against Villanova (then the Icers' biggest rival) on March 12, 1977. In a three-game spring break series against the University of New Brunswick March 3-5, 1977 treated as a tune-up for the conference tournament, Balkey tallied four times and added an assist in a Penn State sweep. In all, the Icers went 29-14-5 with Balkey on the roster, winning a pair of MACHC regular season titles.

Someday, millions will undoubtedly watch a Penn State hockey alumnus participate in the Stanley Cup playoffs. But even once that happens, it will take an awful lot to top the television splash made by Rick Rockwell.
Posted by Kyle Rossi at 12:25 AM