McAdam Rated as Second-Rounder by ISS

In the 2013 version of its annual draft guide, released Monday night, International Scouting Services has named incoming freshman Eamon McAdam its third-ranked goalie ahead of next month's NHL Entry Draft.

Continuing that grand TYT tradition that involves me paying for stuff so you don't have to, here's what the guide had to say about McAdam. First, the overall goaltender rankings, then his detailed player capsule. 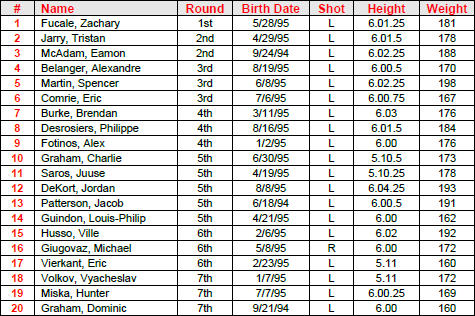 Second round? Not too shabby. 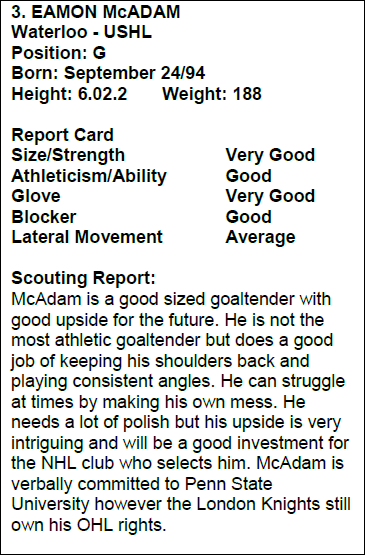 Average lateral movement might not matter when you can do this. Just saying.

McAdam, in case you're wondering why I talk about him so much, has a chance to hit a couple of significant milestones for Penn State's program. First off, his being chosen on June 30th at Newark, NJ's Prudential Center would make him the first-ever NHL selection of a PSU-affiliated player, as transfers Max Gardiner (2010, 3rd round/74th overall by St. Louis) and Pat Koudys (2011, 5th round/147th overall by Washington) were both tabbed while committed to their previous schools. Secondly, if ISS did all of the drafting - and remember, they do none of the drafting - McAdam would become the highest-picked player to suit up for the Nittany Lions.

The ISS list is one of three notable rankings that has attempted to slot McAdam in this year's draft. The Hockey Writers recently placed him as a fourth-round-worthy 113th overall, while NHL Central Scouting Services has him as the sixth-best North American goalie in their final ranking (over the last five years, that has meant anywhere from the third to the sixth round and the 77th to the 164th overall pick). McAdam, who is at the NHL Draft Combine in Toronto this week, missed out on The Hockey News' rankings, which only include their top 100 prospects.

Other players with PSU ties who have previously received draft consideration, Bo Pellah, Mike Williamson and Mark Yanis (a second-year eligible) among them, were not listed by ISS. While it's again important to note that ISS doesn't make the picks, it should be taken as another sign that in terms of Penn State interests for 2013's draft, it's starting to look like McAdam or bust.
Posted by Kyle Rossi at 12:32 AM