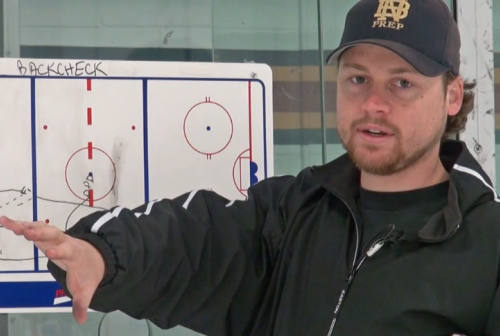 Morrow leaves Hockey Valley after two highly-successful years both with the ACHA Division 2 team and in Penn State's MBA program. In 2011-2012, as an assistant to Josh Hand, Morrow helped guide PSU to a stellar 30-3-0 record that included the Mid-Atlantic Collegiate Hockey Association regular season and playoff championships. The Ice Lions, helped by captain Jim Recupero and goaltender Tom Badali (both all-region selections) qualified for the 2012 ACHA national championships and posted shutouts in the first two games of the tournament, but fell to Grand Valley State in a contest for the right to advance to the semifinals. That defeat snapped an incredible 25-game winning streak spanning from October 21, 2011 until March 18, 2012.

Hand moved on to devote more of his time to the Nittany Lions' NCAA Division I team's goaltenders this past season, giving the reins of the Ice Lions to Morrow. PSU didn't skip a beat though, reloading its way to a 27-6-1 mark, including a perfect 10-0-0 in the MACHA's North Division. For the second consecutive season, Penn State finished the regular season as the second-ranked team in the ACHA's Southeast Region, earning an autobid to nationals. However, once there, the Ice Lions were unable to recover from an opening-game loss to eventual semifinalist Illinois State and again went home with a 2-1-0 record in the group stages of the tournament.

With the Jr. Steelheads, Morrow will be stepping into another organization that has done a bit of winning even though it was only established in 2009. Idaho has won the Thorne Cup as the champion of the Tier III Junior A WSHL in each of the last three seasons, and its most recent effort came after a 44-1-1 regular season. Last month, the team also added the Amateur Athletic Union and United Hockey Union national championships to its trophy case (in 2011, the WSHL made waves in the hockey world by leaving USA Hockey's umbrella and joining the AAU). Typically, the Jr. Steelheads send players to the Tier II North American Hockey League or directly to NCAA Division III, ACHA Division 1 and ACHA Division 2 programs. In 2012-2013, left wing Patrick Anderson became the first Idaho alumnus to join an NCAA Division I team, arriving at Michigan Tech after one season with the Jr. Steelheads and two in the NAHL.

Prior to his arrival at PSU, Morrow - a University of Miami graduate - spent three seasons assisting former NHL enforcer Peter Worrell with Florida Atlantic's ACHA Division 3 team and with North Broward (FL) Prep. With Morrow on the staff, North Broward won two state titles and appeared at the USA Hockey High School National Championships.
Posted by Kyle Rossi at 1:25 AM