Some nice coverage of Ryan Patrick, the former Icer who was named the Pegula Ice Arena's hockey director a couple weeks ago, focusing largely on his brief tenure under some adverse circumstances as Sewickley Academy. But it still fit in this quote:


“There is a lot of excitement in the area,” Patrick said. “It should be like in Pittsburgh with the ‘Sidney Tsunami.' There was a spike in playing when Sidney Crosby came to Pittsburgh. That is what we are hoping for here with the new arena.”

Population limitations (especially relative to Pittsburgh, the other half of the comparison) will always have something to say about Central PA's production of players, but there's absolutely no reason that Jill Holdcroft has to stand alone as a great locally-produced player.

It's nothing of any great substance, but here's some coverage of Guy Gadowsky's Coaches Caravan stop in DuBois Thursday morning. That was one of his two appearances, and I'd like to think I did an adequate job on the second, in Pittsburgh that evening. So there you go.

I'm just glad that I'm not one of the PSU football writers who had to cover Bill O'Brien saying the exact same thing 12 times over. That had to be brutal.

There's no rule that says a first star has to be something of immediate concern. Random highlight videos of Jenna Welch and Nicole Paniccia that popped on the radar last week are certainly worthy, as they involve two of my favorite players. I just wish the Welch one had that elbow she laid on Erin Zach at RIT back in February. Frustration penalty or not, it was bad ass. 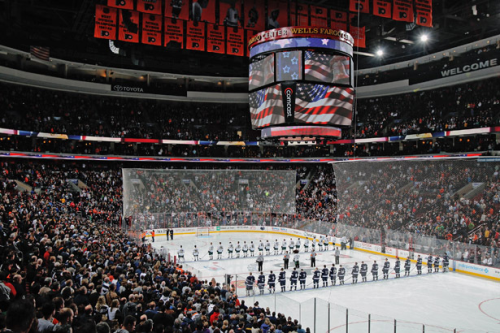 Why is the Philadelphia College Hockey Faceoff being promoted by everyone except the two schools involved? Who knows. But Comcast and the Philadelphia Flyers would like you to know that tickets are on sale now.

Notably, puck drop for the October 26th game has been moved up two hours to 5:00 p.m., meaning that it will no longer overlap with the Penn State at Ohio State football game at 8:00 that night.

Congratulations to New Hampshire's Dick Umile on being the only college hockey coach to double as his state's highest-paid employee. Get that paper. Since you're not getting the hardware, might as well.

Breaking my "newsworthy" requirement here, since this pissed me off...


PSU Hockey's conference schedule has been released. A brief internet search shows that three teams PSU plays (Minnesota, Wisconsin and Michigan) were all ranked at the end of last season. Oh, and their last home game is against Ohio State. I don't even like hockey and I'm getting excited.

Know why people from the outside crack on Penn State's potential as a hockey school? It's because PSU blogs with 20 times (at least) more readership than TYT act like this towards the sport. Bill DiFilippo: still a joke, if you need him.

BTN will air just one primetime football game this coming year - Wisconsin at Illinois on October 19th - after the beginning of hockey season. One has to think that bodes well for the possibility of at least some non-conference Big Ten hockey on the network (the league schedule doesn't begin until the last regular season weekend for football, another move likely made with BTN in mind).

Joe Battista is making the off-season rounds, doing that thing he does where he talks and people are inspired. One stop will be in Pittsburgh on May 30th at the Allegheny HYP club (free for Pittsburgh Smeal Business Club members, $15 for non-members). On June 29th, he'll speak for the Boston chapter of the alumni association, although further details haven't been announced yet.

As you may have guessed, the Big Ten schedule release last week unloaded on my inbox. Most were just the usual fluff (in other words, people painfully trying to write out a schedule in sentences) but this one quoted Minnesota coach Don Lucia, who suggested some possible 6:30 start times for PSU:


"The reality is on Friday, there could be some 8 p.m. starts. There is talk of some doubleheaders on Friday, with 6:30 Eastern [5:30 Central] and 8 p.m. Central. You have four Big Ten teams in the East and two in the West, so it would be us or Wisconsin doing an 8 p.m. start on a Friday night. That’s fine. That’s not as big a deal for our fans because it’s Friday night. I don’t think we’ll run into that on Saturdays. Who’s to say ever, but the indications I hear is that … it’s not as big of a priority for a television date."

The NAIH, which launched with some promise (and was hailed as a possible competitor to the ACHA by a certain blog) back in 2011, is kaput after two seasons. Western Washington University will go down in history as the association's only Founders Cup champion after defeating Le Moyne College 2-1 in overtime back in March (the NAIH didn't hold a championship tournament in 2011-2012). Perhaps the most memorable thing about the NAIH was its ridiculous lack of professionalism, manifested in its numerous trolling posts on ACHA forum Hockey 101 as well as by the time they were hilariously smacked down by Kelly Pegula on Twitter: 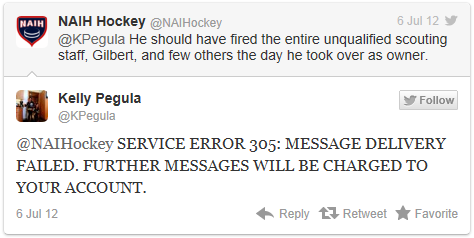 Mourn not though, for the NAIH has apparently merged with something called the USCHA (the United States College Hockey Alliance, I assume, not the Upper St. Clair Hockey Association) to form the Collegiate Ice Hockey Association. The CIHA is already off to a very NAIH-like start, as two players have apparently been crushed to death by a falling logo. 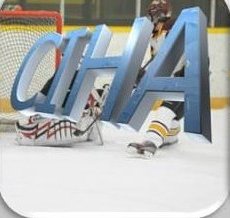 You know who I like? Tom Anastos. Here's an intriguing look at part of his plan to turn Michigan State around by targeting younger, more elite players. Penn State hasn't really gone down that road too much (MSU has three committed 1998 birth years along with one from 1997, and PSU's youngest commit is late 1996er A.J. Greer) but it will be interesting to see if and how things evolve for the Nittany Lions over the next couple years.

Speaking of Anastos, he's quoted in this article about the American Hockey Coaches Association meetings at the beginning of the month. Long story short, nobody agrees on how the NCAA Tournament should look in light of the brutal attendance at the regional sites this year (and most years), but many seem to agree on the idea of rewarding teams in the NCAA selection process for non-conference road wins, something that was previously done from 2003 to 2007.

The AHCA discussions are always interesting and can inform policy changes, but the rubber doesn't really meet the road on these types of things until the NCAA committee meetings in June.

The first-year Johnstown Tomahawks, with an ownership group including Penn State football legends Shane Conlan and Jack Ham, were named the NAHL's organization of the year.


Johnstown is a hockey town, and the fans proved it once again by welcoming the NAHL’s Johnstown Tomahawks with enthusiasm as the team revitalized a community with a rich hockey tradition. The Tomahawks finished fifth in the NAHL in total and average attendance, which included 11 home games with 3,000 fans or more. That’s an impressive stat for a first-year team in a market that had never witnessed NAHL action. The team also made the playoffs in their first season in Johnstown and had three players make NCAA Division I commitments. 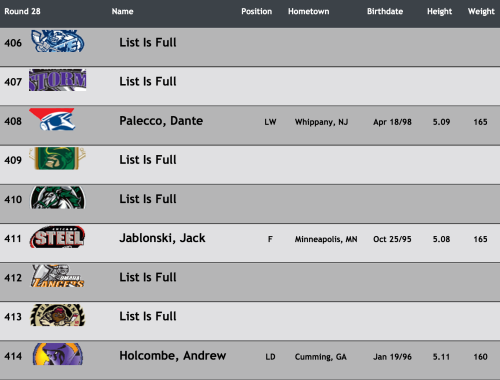 Your feel-good story of the week: in the late stages of the USHL Draft on Tuesday (one that had already seen PSU commit Greer and Tommy Olczyk's brother Nick selected), the Chicago Steel selected Jack Jablonski out of Benilde-St. Margaret's School in Minnesota.

Jablonski, of course, was paralyzed during a BSM game back in December 2011, and his subsequent rehabilitation has captivated much of the hockey world. He's unlikely to ever walk, let alone skate, again, but he's still going to be a hockey player for a very classy USHL team.

Three months before Jablonski's injury, the plane crash that killed all of KHL team Lokomotiv Yaroslavl was the dominant tragedy in the hockey headlines. Lokomotiv withdrew from the KHL for the rest of that 2011-2012 season and instead played in the VHL, a lower league, after pulling together an entirely new roster. They returned to the KHL this past season, going 34-18-0 and qualifying for the playoffs. Now, they're training in Manheim, PA of all places. Pretty cool.
Posted by Kyle Rossi at 3:58 AM