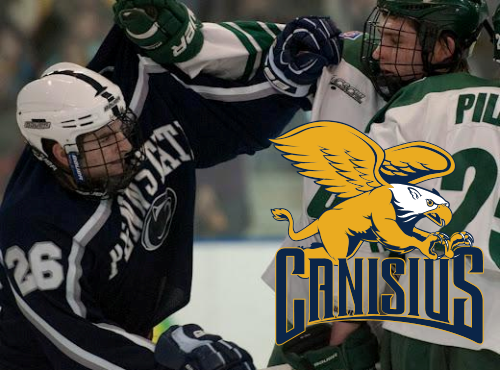 UPDATE 9/10 1:15 P.M.: Canisius has released its official 2013-2014 roster with Russo, who will wear number 47, included. He will sit out the first eight games of the season due to issues transferring credits from Penn State.


Multiple sources have confirmed to TYT that star Ice Lions defenseman Brandon Russo has transferred to Canisius College, where he will join the school's NCAA Division I program in December once his release restrictions from Penn State have expired.

The move is sort of a full-circle transition for Russo. The Fairfield, CT native and Salisbury School graduate was a 2009 USHL Draft selection of the Youngstown Phantoms spent the 2010-2011 season in that league. In 14 games with the Phantoms, Russo posted a goal and seven assists to be the team's leading scorer among defensemen, but he was shipped to Indiana in a mid-season trade and finished out that campaign with the Ice. In all, he had 24 points (two goals, 22 assists) in 51 games.

Russo was one of Guy Gadowsky's earliest recruits, committing within a couple weeks of the coach's hiring in May, 2011. And, truth be told, he was easily one of the stars of the class, even with four NCAA transfers (Taylor Holstrom, Nate Jensen, Bryce Johnson and Justin Kirchhevel) and Tommy Olczyk also coming in for the final Icers season. Respected programs like Harvard, Nebraska-Omaha, Yale, Union and, yes, Princeton had all kicked the tires in spite of his 5'8" height. College Hockey Recruit Exchange called him the seventh-best prospect east of the Great Lakes in 2008, a list also including notables like former Harvard captain Danny Biega, Notre Dame's Stephen Johns and Stanley Cup champion Brandon Saad.

As a freshman, he didn't disappoint on the ice. In 20 games, he had a line of six goals and nine assists, including a tally in an ACHA National Tournament win over West Virginia while demonstrating the type of high-tempo offensive upside Gadowsky values on the blueline. Officially, he missed many of the early-season games due to injury, unofficially, there were (unconfirmed) rumors of off-ice issues. Whatever the situation, he fell out of favor with the coaching staff and was not carried over to last season's NCAA roster.

Instead, he spent 2012-2013 with the ACHA Division 2 Ice Lions, becoming a vital cog on a team that returned to the D2 national championship tournament despite losing players like captain Jim Recupero and star goalie Tom Badali from the previous year. Russo was better than a point per game player during the regular season (30 in 27), including three power play goals, as Penn State won the MACHA North regular season title and finished as the Southeast Region's number two team. He was recently named a second-team ACHA D2 All-American, essentially confirming that yep, he's still a pretty good hockey player.

He'll join a Canisius program that broke new ground in 2012-2013, despite a 13-18-5 regular season record. The Golden Griffins swept RIT to close the schedule, then stormed through the Atlantic Hockey playoffs, taking down Bentley, Air Force, Niagara and Mercyhurst to secure the league's automatic NCAA Tournament bid. A loss to top overall seed Quinnipiac in the East Regional (but a very competitive one, as the Griffs held a 3-1 lead in the third period before allowing three unanswered) ended the run, but still, point made. Not only was it the first NCAA appearance for Canisius, but it was the first time Atlantic Hockey sent two teams to the tournament, with Niagara earning an at-large bid. With star goalie Tony Capobianco, leading scorer Kyle Gibbons, and nearly all others back, expectations are undoubtedly running high for coach Dave Smith's squad.

While Russo will never sit on the home bench at Pegula Ice Arena, in an interesting twist, he'll eventually play at another Terry Pegula-funded venue: Buffalo's HARBORcenter, which will host the Griffs upon its completion in time for the 2014-2015 season.
Posted by Kyle Rossi at 12:05 AM