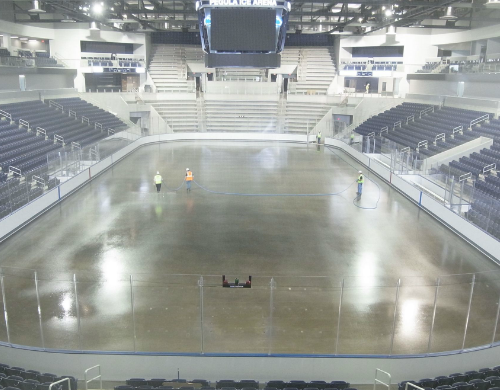 Pegula Ice Arena employees, through Mortenson Construction's cameras, were spotted Friday afternoon hosing down the main floor of the facility. The ultimate goal, of course: ice.

Ice installation is a complex process, involving several layers frozen in sequence, some only 1/32 of an inch thick. The first layer - what appears to be taking place in the photo - is one of the thinnest and will freeze quickly. It will then be followed by a similar second layer, which will be painted with the familiar white color. The third layer, which is twice as thick as the first two, will carry the rink's markings, and eight to ten more layers will finish everything off. The final product will be roughly one inch thick and contain 12,000 to 15,000 gallons of water.

Beyond the excitement of the milestone event and the approaching season and arena opening marked by it, there's at least a little bit of intrigue concerning those rink markings. What will center ice look like? Where will the Big Ten and CHA logos be placed? We'll find out in the next few days, although the smart money is on something like this to answer the first question: 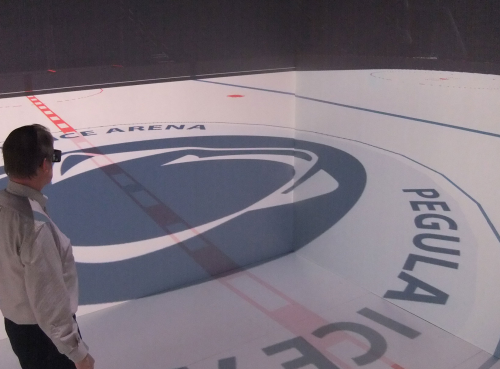 Previously, the Centre Daily Times reported that the first layer of ice would be laid down August 15th (yesterday), with the surface ready for skates on August 19th. The delivery of one of PIA's Zambonis on Wednesday will obviously be helpful pretty soon as well.

Special thanks to Steve Hass (@D1WomensHockey on Twitter) for the heads up on the news.
Posted by Kyle Rossi at 1:13 PM