One thing that I've observed quite a few times, in both professional and college sports, that once a team is lost, there's generally a five-to-ten-year moratorium before clamor for a replacement begins. I have no idea whether that's due to mourning, indifference (which either caused the issue in the first place or built up after the fact) or what, but it's definitely there. Just watch what happens in Atlanta if you don't believe me. Big league hockey will be completely off the radar for a few years. Then someone with a sizable readership will pump out a well-written and well-researched Thrashers retrospective. Shortly after, someone will suggest that Atlanta should get another crack at an NHL franchise.

Penn State hockey, of course, took its turn at the process following the discontinuation of the initial varsity team in 1947. Here's the media frenzy when that happened. 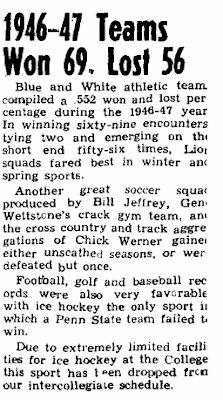 Anyway, my goal here was to test my theory relative to PSU, so I scoured the Collegian archives for any mention of ice hockey in the decade following that unceremonious ending of the program and sure enough, there was but one major story over the next seven years, although it was indeed "major."


So wait...hockey was ended because of the "extremely limited facilities," and we now have a facility that is artificially frozen and not entirely reliant on cold weather. Would a hockey team now follow? It took all of one day to squash the dreams of those who asked that question.


So we went from "no facility" to "it costs too much" somewhere between 1947 and 1954. That moving target might help explain why another 16 years passed before Penn State got another crack at a team following completion of the $200,000 rink. That team, of course, is the Icers - and they even ended up playing on the Ice Skating Rink, which had become The Pavilion in the intervening years by adding a roof and walls.