3. A Winnipeg-Like Second Chance For These College Hockey Cities?
(BC Interruption)

A Boston College blog attempts to find the college hockey equivalent of Winnipeg. Philadelphia (which lost Villanova and UPenn) and Chicago (Illinois-Chicago) are given mentions for reasons connected to PSU or the Big Ten. My personal vote? Kent, OH.

Reed Linaker's junior team brought in a couple assistants for this coming season, both with strong ties to junior hockey in the St. Albert area. No, I'm not sure why I gave a place ten miles from Edmonton credit for having its own "area."

Among the deluge of Brandwene write-ups, these two stood out to me - one of its writing and the other for its reporting/attempt to dig a little deeper into the coach's background. Kudos to both, enjoy the linkage.

Remember a week ago when I brought this guy up? Yeah, forget about that. Obviously, since he's going to his hometown DIII school, it probably means that PSU wasn't interested in the former Western Michigan blueliner.

Meanwhile, the other transferring defenseman I mentioned is still, as of Friday, in a holding pattern trying to decide between PSU and OSU. I'm going to go ahead and assume interest from both sides on this one, otherwise it would be a pretty easy call, I would think.

Could the Irish be the first team from the decimated CCHA or much-less-decimated WCHA to find a stable conference arrangement? Hockey East makes sense for a lot of reasons, Catholicism for one, as Providence, Merrimack and Boston College of HEA share that religious affiliation. Furthermore, the existing conference plus Notre Dame makes for a nice TV product that includes large east coast markets and a school that's loved and hated everywhere simultaneously. With NHL broadcaster Versus both seeking to get into college hockey AND now affiliated with ND's partner NBC...well, this almost makes too much sense to happen.

2011 goaltending recruit P.J. Musico got a split second of fame on TMZ Thursday evening and has the picture to prove it. He's carrying the green board. 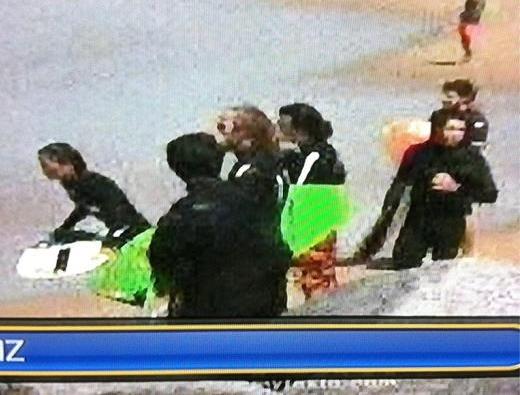 I'll see your TMZ and raise you a Penn State hockey webcast. 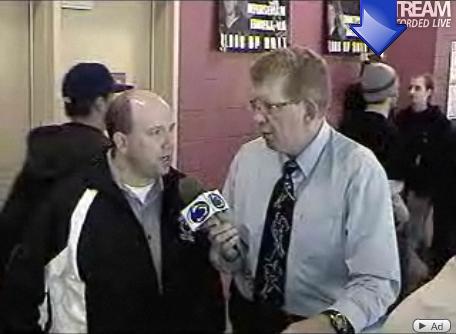 Oren Eizenman, brother of Icers legend Alon, is involved with a charity event in a couple weeks, so check it out if you're in the Buffalo-Niagara Falls area. More information:


The HP4K Classic is a way to formally bring together members of HP4K, various hockey celebrities and local talent for a day of fun. Come see HP4K members like Darroll Powe of the Philadelphia Flyers, Erik Condra and Colin Greening of the Ottawa Senators, and Mike Moore, who played this year with the San Jose Sharks. The night will include auctions for jerseys and memorabilia, and will raise awareness for HP4K and our community initiatives around the world.

The HP4K Classic will be held at the Gale Centre, 4171 Fourth Avenue, in Niagara Falls, Ontario, June 23, 2011 at 7:30 P.M. Tickets are $5 at the door; kids under 12 get in free! All proceeds from admission, merchandise sales and donations will be used to fund future HP4K programs as well as support local Niagara youth hockey organizations.

In case you need a quick Oren update since I posted about him last November, he ended up with 6 points in 33 games with the AHL's Connecticut Whale. He was loaned to the ECHL's Elmira Jackals on March 10th, teaming up with former RIT goalie and Whalers fan Jared DeMichiel and his epic Twitter account. Eizenman finished the season with 23 points in 20 games for the Jackals in two separate stints (6 points in 8 games during the more recent one).﻿
Posted by Kyle Rossi at 2:03 AM