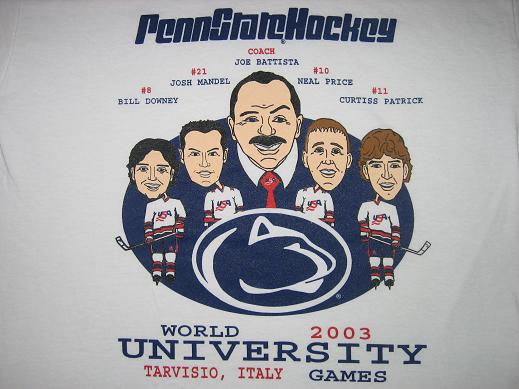 Normally, a simple t-shirt would be beneath this series. This one merits an exception though, as it has both historical and entertainment value in its depiction of the Penn Staters who represented their country in the 2003 World University Games in Tarvisio, Italy. The 2003 edition of the bi-annual event was the second since USA Hockey recommenced participation using some of the ACHA's best players.

The shirt itself is just a plain white t (hey there Delilah) with the pictured design on the front. I have no idea who drew Joe Battista and former Icers Bill Downey, Josh Mandel, Neal Price and Curtiss Patrick, but he or she did a pretty decent job with the four players and their wildly varying hairstyles. Here's proof.


The depiction of Battista is interesting however, to say the least. While it's possible that he chewed some Three-Course Dinner Chewing Gum and turned into a giant blueberry at some point just prior to finalizing the shirt, I prefer to think of the blue oval as decorative and of Battista as resembling another classic character.

Not pictured on the shirt: new women's hockey coach Josh Brandwene, an assistant on the team - although Battista's first recruit at Penn State was disqualified from cartoonification by virtue of his being a Delaware Blue Hen head coach at the time. But for what it's worth, Battista recently described having Brandwene next to him in that tournament as one of his favorite coaching memories.

Despite the presence of the two great coaches, Team USA didn't fare very well at the games, going 0-5-0 and finishing 11th against some tough competition including the Czech Republic, Finland and Canada. Individually though, the Penn State contingent proved to be worthy selections as Price (1-2-3), Patrick (1-2-3) and Mandel (1-1-2) were ﻿three of the team's top four scorers. Patrick, as tends to happen with him, was also second in penalty minutes with 10.
From a team standpoint, it did get better for Battista and his quartet of players that season upon returning stateside, in the form of the Murdoch Cup. But that was a different post.
Posted by Kyle Rossi at 2:49 AM