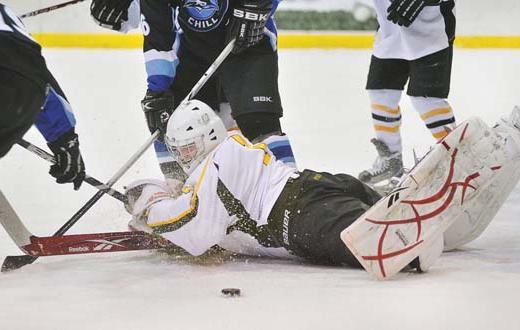 Here's the full text of the release:

A goaltender who appeared for the Black Hawks off of the team’s affiliate list last winter, McAdam played in four USHL games. He was 2-2-0 for Waterloo, posting a 3.48 goals-against average and 88.8% save pct. McAdam’s first league win came during a 20-save performance versus the Chicago Steel on January 15th. The 16-year-old also played for the Austin Bruins of the North American Hockey League in 2010-2011. Taking the ice nine times for the Bruins, McAdam was 2-4-2 with a 3.32 GAA and 90.4% save percentage.

“We were fortunate to have Eamon available to us at several key points last season,” said Black Hawks Head Coach P.K. O’Handley. “Having had that experience should prepare him to be a significant contributor to the Black Hawks this season.”

Last winter, 14 Black Hawks players had commitments to Division I universities. McAdam is the ninth player on Waterloo’s 2011-2012 preseason roster to choose a school.

Following a sturdy midget season with Team Comcast (including a pair of shutouts), McAdam was drafted twice in 2010: by the London Knights in the fourth round of the Ontario Hockey League Draft, and by the Black Hawks in the sixth round of the USHL Futures Draft. He decided in favor of Waterloo and retaining amateur status, so the Black Hawks put him on their protected list and sent him to the NAHL's Austin Bruins to begin last year. "Respectable stats on a bad team" might be an accurate way to describe McAdam's nine games in the Texas capital, and he allowed three or fewer goals in his last five games.

When the second half of the season started, McAdam found himself up in the USHL and got into four games. While he was shelled (6 goals in 40 minutes) by Indiana in his debut, he improved with each outing - his last two appearances were wins, including one goal against on 21 shots versus Chicago and a 14-for-14 relief effort against Dubuque.

McAdam is a popular selection for elite-level camps and showcases, including the recent USA Hockey Select 17 Development Camp from July 7-13, where he posted a 2-1-0 record with a 3.20 goals against average and a 0.910 save percentage. Earlier this summer, he was at the Warren Strelow National Team Goaltending Camp (May 12-15) and the Liberty Bell Games (June 10-12). That latter event is attended by numerous scouts and coaches from across professional, college and junior hockey, and assistant coach Matt Lindsey represented Penn State - one can't help but think that a strong performance there ultimately helped lead to McAdam's becoming the newest Nittany Lion.