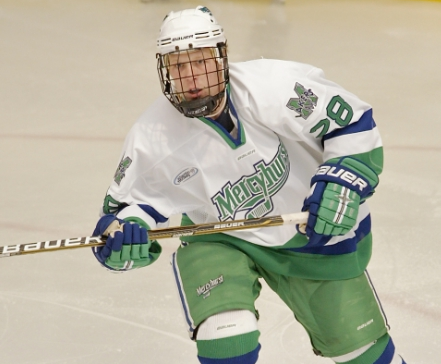 On Sunday evening, Andrew Dzurita of Lions 247 broke the news that Mercyhurst rising sophomore Taylor Holstrom is transferring to Penn State for this season. As with the other NCAA DI transfers coming in, the 2011-2012 ACHA season will count as his NCAA-mandated sit-out year.

Fellow former Laker Nate Jensen, who is also transferring to PSU for this season, is an obvious connection to Holstrom. But he also shares a bond with incoming goalie P.J. Musico - the two teamed up to help the Los Angeles Selects to the 2008 USA Hockey Pacific District U18 Tier I title. Both Holstrom and Musico were key to the clinching win against the Los Angeles Jr. Kings, with the netminder stopping 39 of 41 shots, and the diminutive forward sniping twice on the power play. Selects coach Jeff Turcotte on Holstrom:


“I’ve had Holstrom in my program a while, and he just has been one of the most dominant forwards on the ice. He chases down loose pucks and has great speed. He never really got much attention until this year, but now he has a lot of people noticing him.”

He certainly did, as Musico and Holstrom went their separate ways at that point. The former took a route to Penn State through the EJHL, NAHL and SJHL. Holstrom - who didn't even play hockey until he was nine, and started after attending an Anaheim Ducks game - was a 12th round selection of the Omaha Lancers in the USHL draft and began his junior hockey career in Nebraska.

Holstrom contributed to a star-studded Lancers team that included Louis Leblanc, Danny Kristo and Seth Ambroz by, among other things, scoring the game winner on November 8th against Waterloo. That victory was one of 32 for Omaha (against 21 regulation losses and 7 overtime losses), although they were unceremoniously dumped out of the first round of the playoffs by Fargo after a second-place regular-season finish.

After that 2008-2009 season, Holstrom was scooped up by the Youngstown Phantoms in the USHL expansion draft when the former NAHL squad (whose alumni include George and Brandon Saad) decided to elevate itself to the Tier 1 junior league. 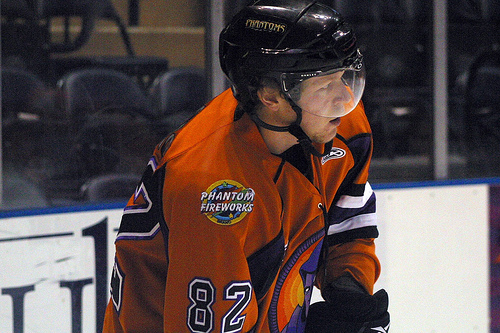 While the Phantoms predictably struggled (20-36-4, last place in the East Division), Holstrom had a solid year. His 33 points tied for second on the team, and he earned a -2 rating - outstanding on a bad team (only one player who played more than 25 games with the Phantoms that year had a better plus-minus). He was named to the 2010 USHL All-Star Game, and registered an assist in the East Division's 5-4 win. Other highlights included a four-point effort against the USNTDP on January 18th and a trifecta of three-point outings.

Mercyhurst assistant Bobby Ferraris, who recruited Holstrom for the Lakers, gave the USHL version of Holstrom this endorsement:


"He was noticeable (for) his work ethic. For a shorter kid, he certainly was quite brave the way he played."


"Clearly he has the potential to be a great player, not just for us but ... in our conference."

In February 2010, when Holstrom committed to Mercyhurst, he was considered a huge get for the school, which beat out major conference members Bowling Green and Dartmouth for his services. He certainly lived up to the hype in his freshman season, earning time on the Lakers' top line as well as power play and penalty kill duties. He was third on the team in scoring (first in assists and power play goals), and perhaps just as importantly took only four minor penalties on the season. Because of all of that, Holstrom was Atlantic Hockey Rookie of the Year.

Now he's an Icer, soon to be a Nittany Lion. And if the ACHA wasn't already on notice, it should be. Blogging about this team is certainly going to be both fun and challenging at the same time.
Posted by Kyle Rossi at 11:22 PM