Because TYT doesn't employ a professional sports photographer (Steve Hass is nice enough to help out with women's home games, but he's not available at my beck and call to run to Pittsburgh), and in an attempt to provide worthwhile content, I thought it would be a good idea to give an insider's look at the media experience for the Three Rivers Classic. It was my second time in the press area of a major league venue (following Philadelphia's Citizens Bank Park for the outdoor game last season), but my first time in an NHL arena. Since I'm guessing most of you aren't professional media members, hopefully you find this interesting.

Click on any of the photos to enlarge and open a gallery view.


First off, some touristy stuff. On Friday, I missed the exit for CONSOL Energy Center and ended up at the top of Mount Washington, where I caught an unreal view of Pittsburgh. I was running late then, but came back early on Saturday to make sure I got a picture. 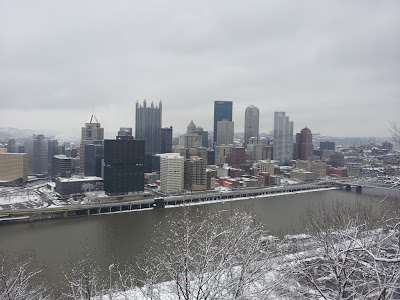 It's kind of bizarre knowing that The Igloo used to be in that big, empty area. The photo was taken from the South Parking Lot, which is north of CONSOL Energy Center but south of the arena that stood when it received its name. 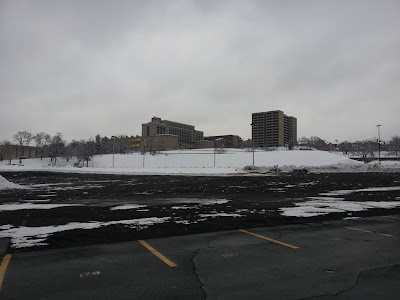 They kind of like Mario Lemieux in this area. 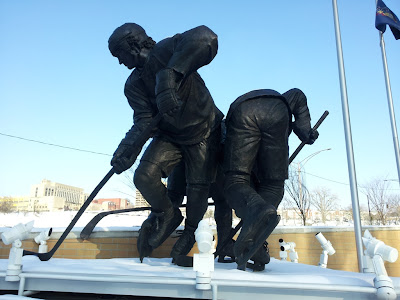 The most photographed side of the CONSOL Energy Center - probably because it reflects the downtown skyline. The media entrance is through the Penguins' administrative offices, near the corner of Washington and 5th, right next to ticket windows and near a major gate. For the 4:30 p.m. starts of the Three Rivers Classic, the door opened at 2:30. 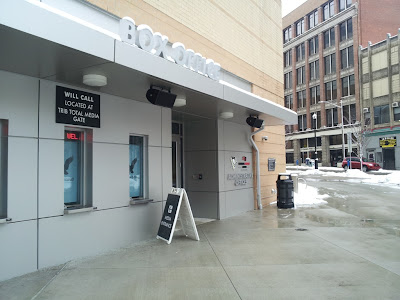 Just inside that door is a table for credential distribution. As you can see, there was a good deal of media interest in the tournament. Many notable figures from Pittsburgh sports media were on the list (Mark Madden of 105.9 FM and Rob Rossi of the Pittsburgh Tribune-Review were the two I seemed to run into every 20 seconds), as was ESPN's John Buccigross (although he didn't show). 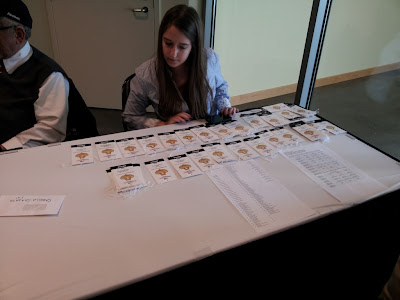 From there, an elevator goes up to the first floor, the event level - since everything in Pittsburgh is on a hill, the media entrance is actually below the ice surface. Notably, for media folks, the event level is home to the media room. A huge buffet was set up before the games on both days. And as you might be able to figure out from the right side of the photo, we'll be back later. 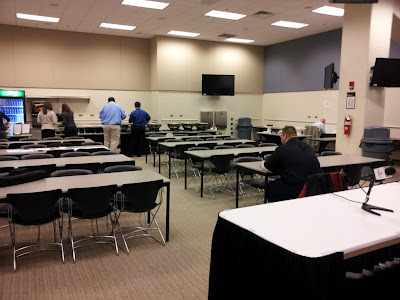 A closer look at the food - this was only about half of what was available, as a salad station and a dessert table are off camera. 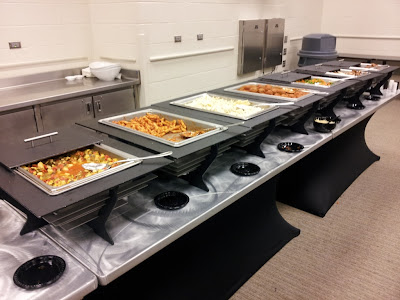 When exiting the media room and exploring the event level, it's not surprising to see the Nittany Lions warming up in the hallway... 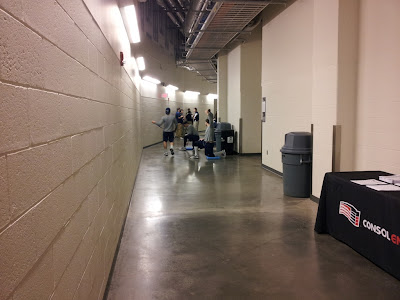 ...because the event level also contains the locker rooms... 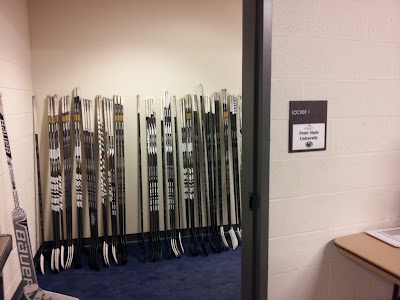 ...including the one used by the Penguins. I wasn't allowed in here, but then again, neither is Sidney Crosby right now. 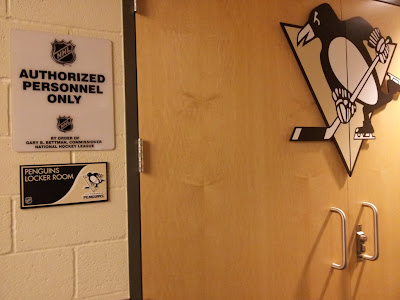 When finally proceeding up to the press box, a different elevator from the first one must be located, which isn't particularly easy to do. Getting there involves walking past the zamboni entrance. 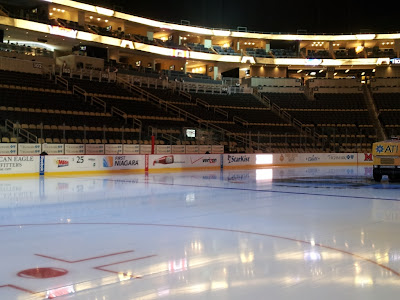 That elevator lets media off on the seventh floor, most of which looks something like this. The walls are lined with photos and news clippings of great moments from Penguins history. 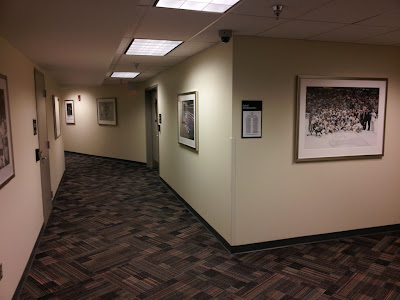 And yes, there's more food up here, in case you didn't eat enough rigatoni and roast beef back in the media room. This is why sports media members are disproportionately fat. Interestingly, CONSOL Energy Center does not stock Coke. Or Pepsi. Nope, they roll with RC Cola. Immediately behind me as I took this photo were game notes and line charts for each team, as well as a big clock synchonized with the scoreboard. 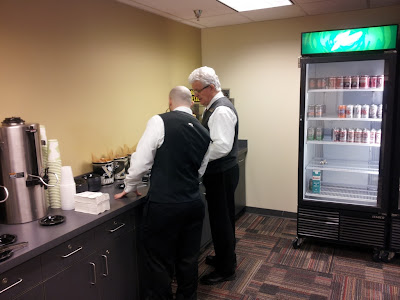 Once past the snack nook, the floor is basically a long hallway. On the left-hand side are doors for the broadcast media booths, as well as the press-box coaches and video review people. There are also a series of black curtains (one set of those is the third thing down the left wall below) that guard small flights of stairs down to the print media's area. 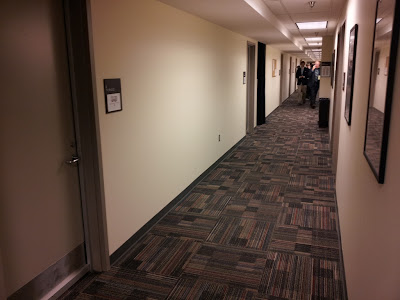 Here's the room set aside for PSU's coaching staff. 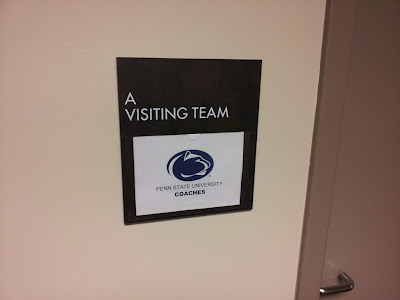 As I mentioned, those booths are just above and behind the non-broadcast people, a group that included a certain Penn State hockey blogger. The table was cramped, but I actually thought the area was kind of neat. You can see that there's a shelf for non-essentials, which helps with the space crunch. Monitors are stationed at frequent intervals right in front of us and those speakers on the back wall, in addition to the PA, transmit the postgame press conferences. 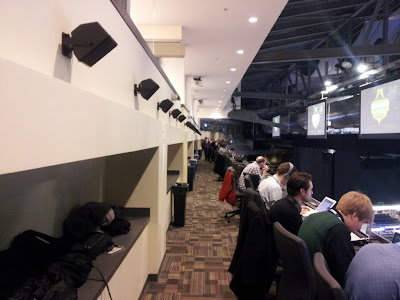 This never gets old. Each station has two electrical outlets as well as a port for those choosing to get their internet connection through a wire. 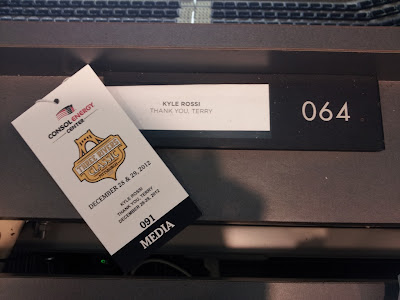 Here's how all of that looks to the rest of you - the table in the previous photo is just above the row of ads with the black background. 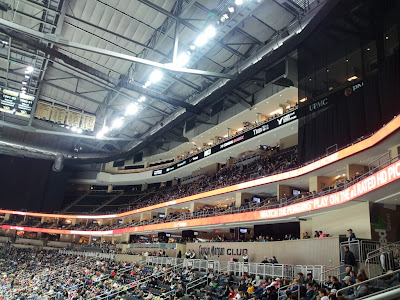 As you might imagine, the view isn't too great, although sometimes the bird's eye is quite helpful. Here's the opening faceoff from the Penn State-Robert Morris game. 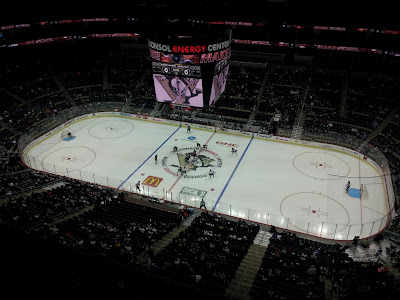 From there, everyone sort of does their own thing. I, as I'm sure you know, frantically type into a live blog during the game. More traditional people gradually build their game recaps as things proceed and jot down questions. Bloggers and newspapermen alike tend to have Twitter open on their laptops. Broadcasters broadcast, of course. Some have no specific obligations and just watch the game for free because they can. Sometimes that game goes poorly, such as the one above. But sometimes, you get to witness something special that makes doing this worthwhile. 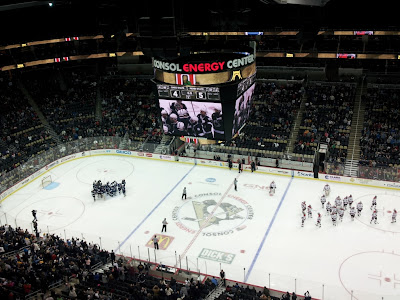 When the game ends, it's a bit of a rat race to get back downstairs to get that perfect seat for the postgame press conferences. The tables from the buffet have been moved out by this point, with several rows of chairs in their place. 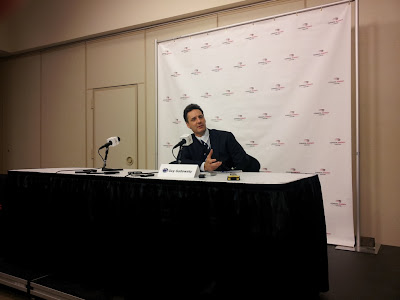 Once the postgame is complete, most hurry back upstairs to finalize a recap of some kind with the quotes they didn't have before, or complete other work. Certainly, I would have rather seen Penn State play for the championship on Saturday, but the early time slot was quite beneficial in allowing for more postgame work time (it has to be said that Miami's media received the same game results from the weekend without the benefit of that extra time on either day). Surprisingly few people stayed through the entire two games on each day. And obviously, when done working, everyone heads back down the elevator, then down the other elevator, then out the door they came in.
Posted by Kyle Rossi at 3:33 AM