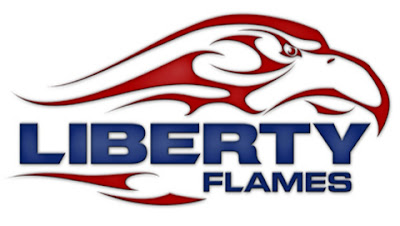 Now that it's over, possibly forever unless we schedule them again next season, I'll come clean on one thing, then move on: I have about as much tolerance for Liberty University as LU has for homosexuality. I'm a little bothered that we even play them, given some of the backwards thinking that's a part of the culture there. I'd prefer to see their program shrivel up and die because no respectable opponents were willing to give them the time of day. And yes, I do take it a little personally that we didn't carry our Thursday momentum through to a sweep. I wish nothing but bad things for that program and school.

I needed to say that, thanks for indulging me. Anyway...

I'll start with Thursday and sort of blend into Friday as I go. First off, I actually have to give head coach Scott Balboni a ton of credit for the win in game one. As part of the answer to what was considered a sluggish weekend by most against Ohio, Balboni shook up the forward lines and ended up arranging them this way:

There was an immediate payoff, as Pronchik scored on a breakaway 3:22 into the game, then drew a penalty a few minutes later, which led to a power play goal and a 2-1 lead. However, things went a little differently for the next half of a game - sure, the defense was putrid (more on that in a minute), but the offense disappeared as well into a cloud of too much individualism and not enough patience. A lesser coach might have been tempted to tweak the lines again to get something going, but Balboni stood pat and the result was the Icers' best period of the season - driven in large part by the O'Brien and Morrone lines. In fact, each of the top three lines generated at least one even-strength goal Thursday night.

At some point during the first period Thursday, I considered writing something in this post about the improved play of defenseman Dan Loucks. After all, it was Loucks with the beautiful stretch pass to spring Pronchik for that first goal, and I thought he had gradually gotten better since a rough start to the season at Pitt. Then he put an outlet pass right on the stick of Liberty's Rick Turner, who turned it around to beat Teddy Hume for a 3-2 Flames lead, chasing Hume from the game.

Loucks wasn't the only Penn State defensemen guilty of careless play. Liberty's first goal came directly after Rich O'Brien couldn't control a pass around the boards, and the second one, while more directly connected to a Daley-Polidor miscommunication at the blue line, actually began when O'Brien flubbed a point shot. That turnover led to a Turner breakaway, which led to that other error.

Credit? How about Dan Petrick for understanding the defense's shortcomings, then helping to lead a turnaround with his play? He had this to say after the second period (starts at 1:31:11):

From that point forward, the Icers checked in with their most dominant effort against a good team in quite a while - and that included the defense corps, as goalie Dan Ivanir was barely challenged (6 shots in 35:17) after relieving Hume.

I'd love to say that the high of that third period carried over into Friday night, but it simply did not. Special teams were the key early on, as the Icers managed to kill a five-minute major for boarding to Cera - Rich O'Brien stood out as particularly effective on that one - then scored on both ends of a 5-on-3 to take a 2-1 lead into the first intermission. After Brent Boschman tied the game up early in the second, what had been a well-played game slowly dialed the intensity back to zero.

The Icers' penalty kill came up huge again late in the game when Carey Bell went off for slashing at 15:40 of the third period, but what looked like a game-deciding penalty passed uneventfully. That turned out to not matter shortly after when Jonathan Chung found Stephen Moller, who fired a game-winner home from the top of the circle with 1:45 left. Still, special teams clearly stands out as the biggest positive from Friday night.

By the way, yes, I'm fully aware that Hume has been pulled in his last two starts. I didn't even mention it in my Ohio Weekend Observations, nor did I mention it until now in this post, because I really don't consider it an issue. Hume is a great goalie who was largely victimized by bad play in front of him. Period. I only mention it as a segue into the play of freshman Mathew Madrazo Friday night, in his first start for the blue and white. Despite the loss, I thought he played tremendously, showing great poise in the crease, challenging shooters, not giving up rebounds...basically everything you look for in a goalie. He finished with 31 stops on 34 shots. I don't think it's any great insight on my part to say that Penn State's goaltending is in great hands once Hume's career wraps up.

I started this post talking about forward lines, I might as well close it the same way. Given that the last two periods Friday night looked pretty similar to most of the Ohio series, are we primed for another shakeup, or will Balboni leave them alone and let some chemistry develop? What about George Saad and his bruised knee? Will he be back, and if so, where does he fit? We'll find out next Friday at 9, when West Chester comes in for the front end of a home-and-home.
Posted by Kyle Rossi at 12:32 AM